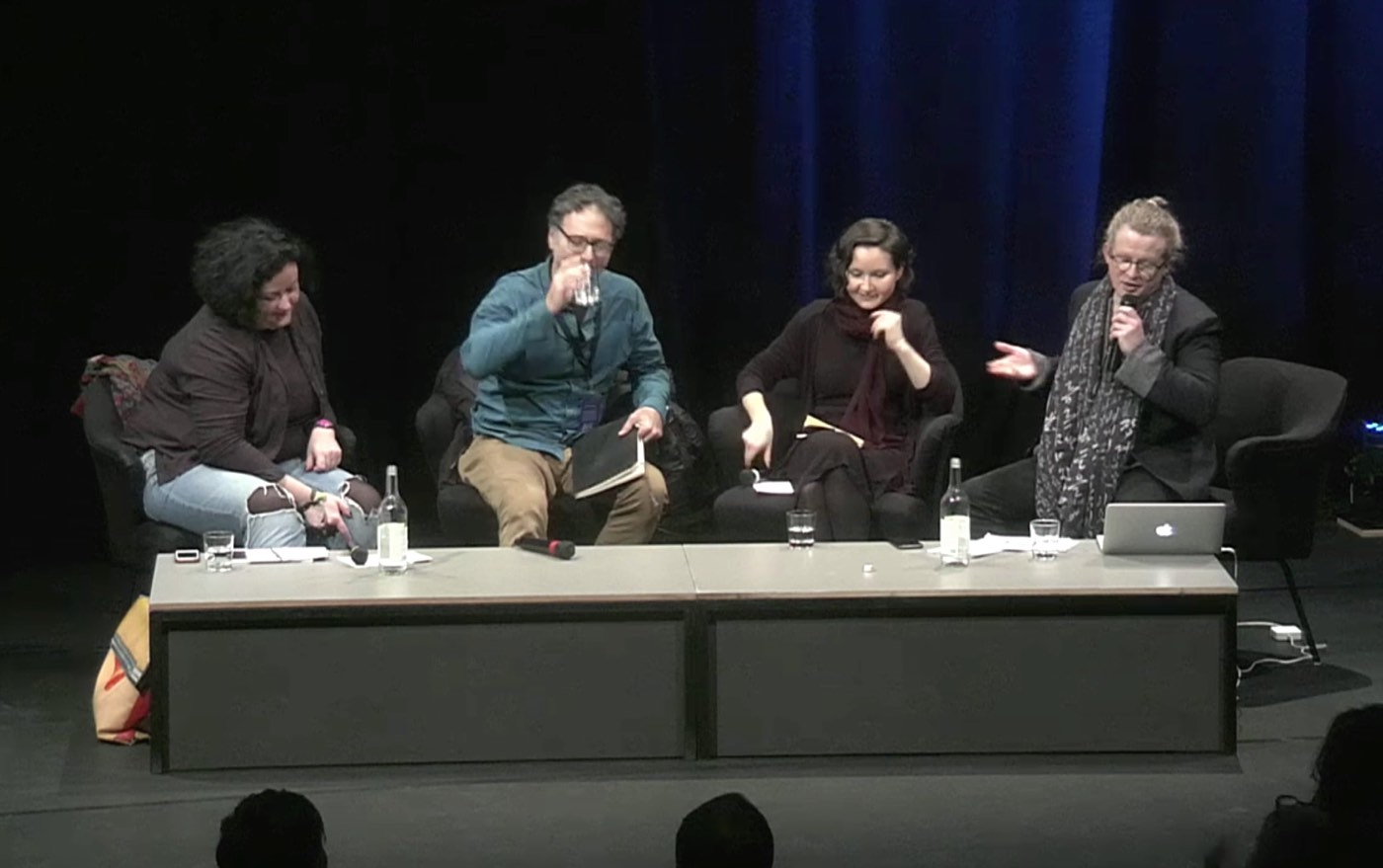 
The closing session of transmediale examines how our understanding of networked media may still benefit from materialist analyses of media theory, applying the insights of such figures as Harold Innis and Marshall McLuhan to the ecologies of social cybernetics of today. Aiming to refresh the analysis of many of the themes discussed at face value, it asks how one can confront the contemporary crisis of the institutions, of democracy along with the return of a far right and the suppression of social movements. Who’s agenda gets to be paradigmatic, and which are the potentials and limits of networked computation?


Bios of the participants
Jonathan Beller is professor of Humanities and Media Studies and director of the Graduate Program in Media Studies at Pratt Institute. His books include The Cinematic Mode of Production: Attention Economy and the Society of the Spectacle (Dartmouth College Press, 2006), Acquiring Eyes: Philippine Visuality, Nationalist Struggle and the WorldMedia System (Ateneo University Press, 2006) and The Message is Murder: Substrates of Computational Capital (Pluto Press, 2017). He serves on the editorial board of several journals, including Social Text.

Baruch Gottlieb is a Canada-born media artist exploring navigable fiction and documentary and an active member of the Telekommunisten Network. His work's focus is the industrialisation of the subject of industrially-produced media. He lectures in digital aesthetics at the Studium Generale of the University of Arts, Berlin. He is curator of the traveling exhibition Bodenlos: Vilém Flusser and the Arts, and this years transmediale partner project FEEDBACK: Marshall McLuhan and the Arts. His latest book A Political Economy of the Smallest Things explores the reproduction of digital information at the nano-scale.

Seda Gürses is a Postdoctoral Research Associate at the Center for Information Technology Policy (CITP) at Princeton University, Princeton, NJ/USA, and a FWO fellow at COSIC, KU Leuven in Belgium. Since September, she has also been working closely as a collaborator with the Brussels-based artist collective Constant VZW. She works on privacy and requirements engineering, privacy enhancing technologies, and surveillance. She completed her PhD at the Department of Computer Science at KU Leuven, where she was also a member of the COSIC Privacy and Identity Management Group at the Department of Electrical Engineering. Seda Gürses was a juror in the field of Exact Science at Akademie Schloss Solitude from 2013 to 2015.

Katerina Krtilova is a researcher at the Institute for Critical Theory at the Zurich University of the Arts and coordinator of the PhD program “Epistemology of Aesthetic Practices”, based in Collegium Helveticum in Zurich. Since December 2017 she is coordinating the International Network for Media Philosophy, together with Jörg Sternagel, and since 2016 together with Kateřina Svatoňová the research group Media Theory/Media Philosophy at the Faculty of Arts, Charles University Prague. She received her PhD from Bauhaus-Universität Weimar with a thesis in Vilém Flusser’s media philosophy. In her research she focuses on media philosophy, media theory, philosophy of technology, and the relations between reflexivity, performativity and materiality in 20th century philosophy.

Dr Ewa Majewska is a feminist philosopher of culture. She was a visiting fellow at the University of California, Berkeley (BBRG), a stipendiary fellow at the University of Orebro (Sweden), IWM (Vienna) and ICI Berlin. She works as adjunct professor at the Department of Artes Liberales at the University of Warsaw, Poland. She is the author of three monographs, co-editor of four volumes on neoliberalism, politics, gender, and education; she published articles and essays in: Signs>/em>, e-flux, Nowa Krytyka, Przegląd Filozoficzny, Przegląd Kulturoznawczy, Kultura Współczesna, Le Monde Diplomatique>/em> (PL) and multiple collected volumes. Her main focus is weak resistance, counterpublics, and critical affect studies.