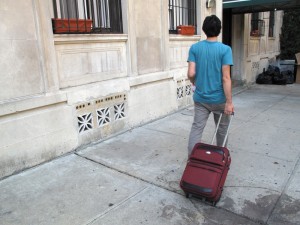 Dutch art gallery West is putting on Carry-on, the first European solo show of photographer David Horvitz. Carry-on documents an art project organized by Horvitz in which he literally carried on pieces of fellow artists’ work in his luggage, and then transported them to The Hague. Collaboration with many people–including strangers–is central to Horvitz’s art, and was an integral part of the two book projects he’s done with MBP, Xiu Xiu and the forthcoming Everything that Can Happen in a Day. In Xiu Xiu, Horvitz accepted boxes of Polaroid film from fans of the band Xiu Xiu and then, while touring with the band, used it to make photographs. He then returned the pictures to the person who gave the box. Everything that Can Happen in a Day is the outcome of a yearlong project during which Horvitz used the Internet to disseminate instructions that anyone could follow. People worldwide did, and uploaded the results (see, for instance, what people did when instructed to photograph themselves with their head in a freezer and then share the photo with the tag “241543903″). Carry-on opens Saturday, September 4th, at the main gallery of West, Groenewegje 136, The Hague, Netherlands.