In dire days for print journalism, it warms the heart to see a new newspaper appear. And one called, somewhat enigmatically, The First/Last Newspaper, began printing in Manhattan earlier this month. It’s offices are a barren looking storefront on the Port Authority Bus Terminal’s Eighth Avenue side, as it happens diagonally across from The New York Times building.

Competition? Size-wise, no. The First/Last is basically a two-man operation, the partners being David Reinfurt and Stuart Bailey. Together they form the guerrilla-ish, digital-aversive designing/writing/publishing collective called Dexter Sinister, which has permanent digs in a Lower East Side basement and takes up impermanent residence in various art world festival situations, like the recent New York Art Book Fair, the 2008 Whitney Biennial, and the current, city-wide Performa 09 which, along with the Times Square Alliance, is the First/Last Newspaper’s sponsor.

With assistance from Brendan Dalton and Anne Callahan, and what the paper describes as “hastily assembled staff of international writers and photographers”(desks in Glasgow, Geneva, Palo Alta, Tivoli in upstate New York), the editors have been turning out an extra-large format, no-color broadside twice weekly since Nov. 3. printing in Long Island City, distributing copies shopping-bag-on-subway style, and passing them out to whoever wanders into the Port Authority newsroom.

The paper’s contents? Semi-news (up-to-the-minute reports mixed with 1968, 1982, etc. reprints), lots of opinionated cultural and media analysis, almost nothing — to be accurate, absolutely nothing — in the Sports, Dining, Automobiles and Obits department, but a hefty amount of what seems to be fiction, or what is now referred to as creative nonfiction. The tone overall: extremely smart (brainy plus street-smart ), sardonic, Dada-intensive.

There are still some bugs to be worked out. As I say, the reporting-opinion divide is a little iffy. And headline writing is in need of style guidelines, ranging as it does in one issue from “Headless Body, Topless Bars” to “Large Hadron Collider Expected to Fail Due to Backwards Causation, Massive Elementary Particle Predicted Plus Standard Model and Colliding Beam Synchrotron Particle Accelerator Explained.”

But time for adjustments is short. In fact, it’s over. The First/Last Newspaper will fold Saturday after a mere six issues, a willing victim of planned and tightly scheduled obsolescence. The good news: Dexter Sinister will soldier on to further pioneer and provoke in the print world it so loves/hates. 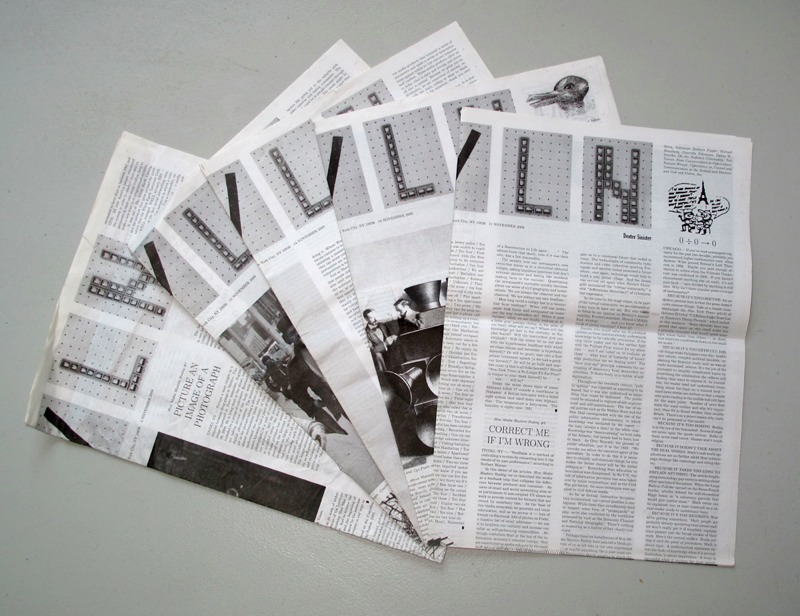