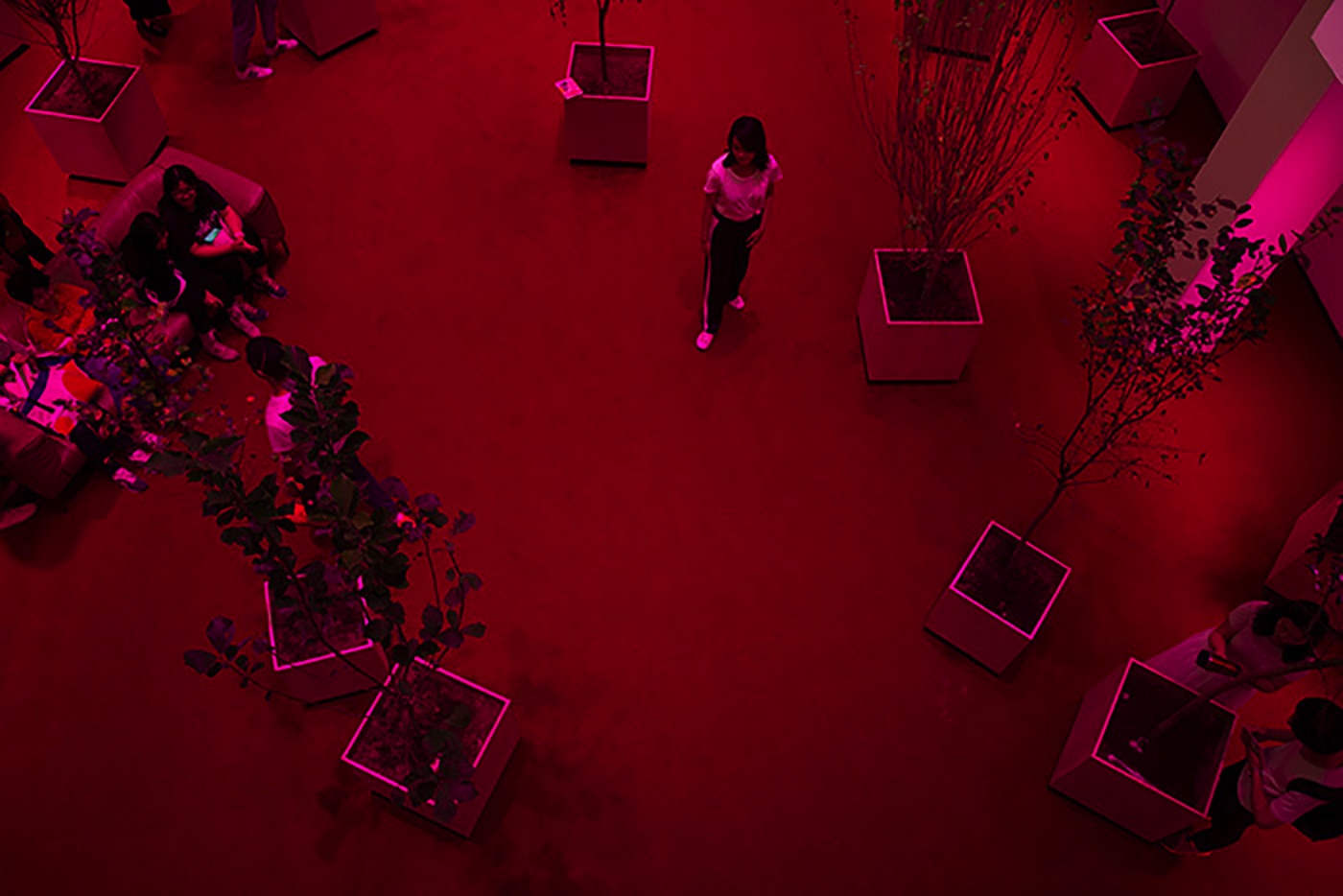 Dialogue is central to artist Asad Raza’s practice, which posits the artwork as a metabolic and active experience. ‘Coalescence’ is Asad Raza’s first solo exhibition in the Netherlands. Raza’s exhibition ranges across the former American embassy, designed by Marcel Breuer, occupying rooms on various floors where visitors experience works or groups of works in linked mises-en-scene. Combining several new works with older works reimagined for this social context, ‘Coalescence’ focuses on the struggle to integrate lived experience across barriers and separations.

A new piece involving a participatory, meditative ritual of playing catch takes place on the ground floor, clearing the visitor’s mind and energy for the experiences to follow. Meanwhile, in the auditorium, Raza’s film ‘Minor History’ (2019) tracks several days of conversation between the artist and his 93-year old uncle. Upstairs a suite of rooms contain ingredients for Raza’s “neosoil” or artificial soil, which visitors are also offered to take home with them. Another grouping across the building offers clues to the importance of play and dialogue Raza’s work, combining prints and videos and scent that relate to the exchange of materials and energies.
In a further dialogical move, Raza has also created a new work especially for this show with Pierre Bismuth, whose solo exhibition runs concurrently. ‘Chiasmus’, Raza and Bismuth’s joint work, takes the form of a frozen food dish in a large freezer in the main gallery. The dish, of spinach with potatoes, beans, herbs, and spices combines the Pakistani ‘aloo palak’ and the Tunisian-Jewish ‘pkaila’, crossing Raza’s and Bismuth’s family culinary biographies and their love of cooking as a practice of everyday life. Visitors who want to try the dish can also purchase it inexpensively on site.

If the office space is where the 20th century performed its signal ‘separation’ of work in the office and life at home, culture was a third space – which was itself split in into specific forms for the five senses: painting and sculpture in the gallery for the visual sense, music in the concert hall for the ear, gastronomy in the fine restaurant for the taste, perfume and clothing in the department store for smell and taste. Through his complex and playful occupation of many offices of West Den Haag, Raza links and unifies into an experience of coalescence : the joining or merging of disparate artistic elements.

Special event: Saturday, May 14, 2022 at 7:00 pm. Pierre Bismuth and Asad Raza welcome the public for a special evening of dialogue. More info soon on the website.

Asad Raza (USA, 1974) creates dialogues and rejects disciplinary boundaries in his work, which conceives of art as a metabolic, active experience. Using actions and processes such as soil-making, tennis, and horticulture, his projects create encounters within and beyond the exhibition setting. They have been realized by institutions including the Whitney Museum of American Art, Kaldor Public Art Projects, Gropius Bau, the Serpentine Galleries, Grand Union, Metro Pictures, Urbane Kunst Ruhr, Front Triennial, the Lahore Biennale, and his one-bedroom apartment in New York. Absorption, in which cultivators create artificial soil, was the 34th Kaldor Public Art Project in Sydney (2019), shown at the Gropius Bau, Berlin (2020) and Ruhrtriennale (2021). In Untitled (plot for dialogue) (2017), visitors played tennis in a 16th-century church in Milan. Root sequence. Mother tongue, at the 2017 Whitney Biennial, combines twenty-six trees, caretakers and objects. Raza’s works often inhabit intimate settings such as The Bedroom, at the 2018 Lahore Biennale. For home show (2015), which took place at his apartment in New York, Raza asked artists and friends to intervene in his life, while Life to come (2019) at Metro Pictures featured participatory works and Shaker dance. Raza was artistic director of the Villa Empain in Brussels in 2016-2017. With Hans Ulrich Obrist, he curates a series of exhibitions inspired by Édouard Glissant, including Mondialité, Trembling Thinking at the Americas Society in New York and Where the Oceans Meet at MDC Museum of Art and Design, Miami. Of Pakistani background, Raza studied literature and filmmaking at Johns Hopkins and NYU, where he helped organize a labor strike.