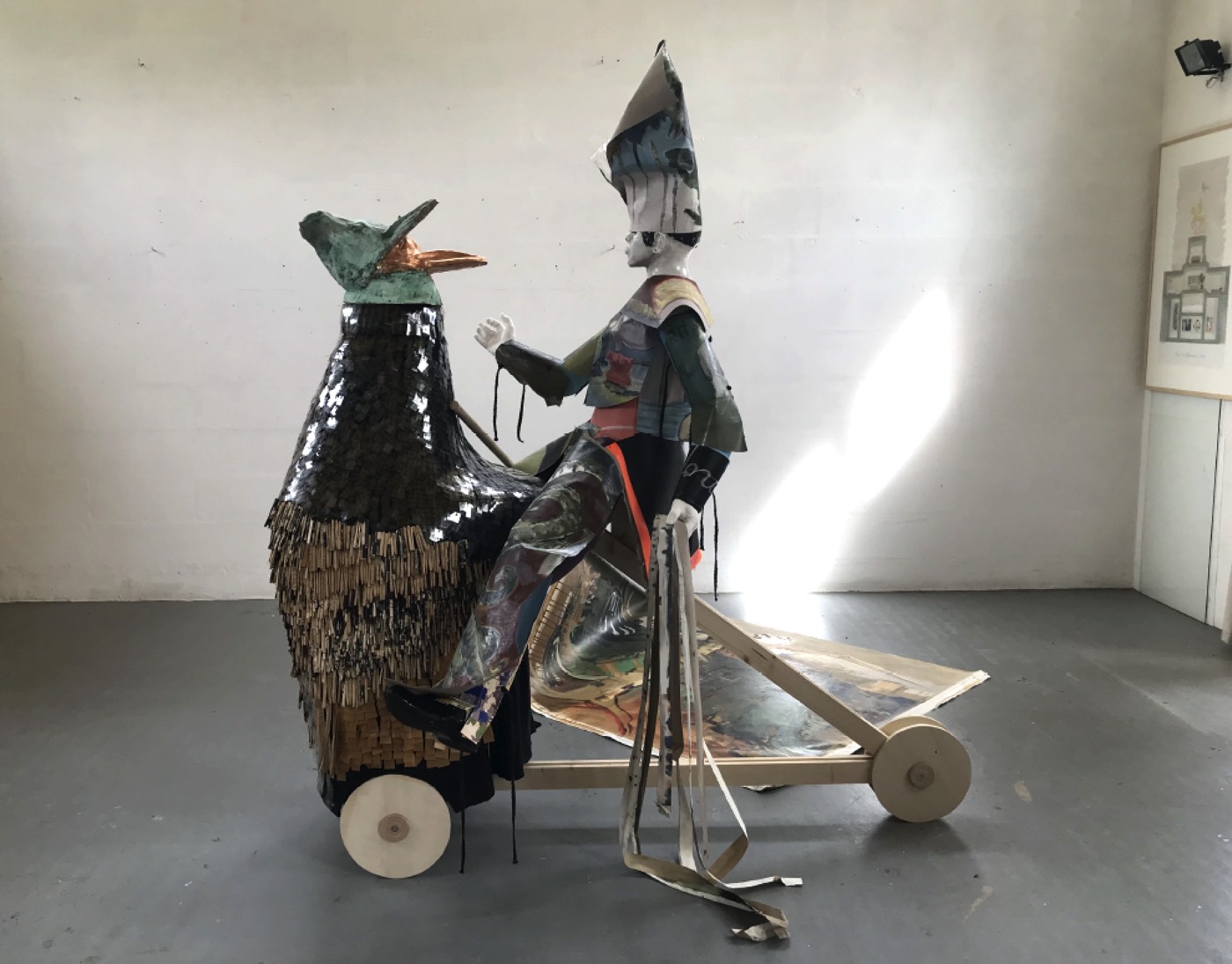 Will beauty save the world?
Marta Volkova & Slava Shevelenko

Within their practice, artist duo Marta Volkova and Slava Shevelenko often examine history and collective heritage. For the exhibition ‘Will beauty save the world?’ they take a closer look at the role of art and the artist in current times. Is art even still relevant in times of climate crisis, shortages and war? Through an installation, watercolour paintings and threedimensional work, the visitor follows a trail of symbols and myths — from Don Quixote to old Dutch monumental statues and tiny hunting lodges.

In the work ‘Lost Don Quixote’, the bewildered artist still sits on his horse, clad in a harness of his own paintings. He is considered an idealist, yet he is demanded to be a tough, successful businessman. The sculpture of Volkova and Shevelenko shows their observation of current society, where symbols and myths still persist. Along these lines, the watercolour paintings in the series ‘Will beauty save the world?’ show existing monuments, next to proposals for each monument to be refurnished as living space. This gives an absurdist perspective on times of migration and refugee crises. In their new installation ‘Kunsttour’, the war of Russia against Ukraine has become the central motive for their work; small hunting lodges have been placed in a maze through a cornfield. Upon closer inspection of the tiny buildings, the visitor can find texts of powerlessness, but also resistance. What can art stand for or do in such a time, except standing guard?

What makes something into a monument or rather a residence, an artist or a citizen? In an ironic and banal, though also serious, way, Volkova and Shevelenko enquire about the function of art. Considering the former Soviet Union as their country of origin, they are familiar with the ambiguity of ideology and society and like to bring this to light. The title refers to a statement from the novel ‘The Idiot’ by Russian writer Dostoyevski, where is suggested that beauty equals the good and truth. Here, art could bring the world forward. The exhibition addresses this question to the audience — is that really (still) the case? The works take apart and reconstruct the status of art, morality and reality, and ask us to reflect on our society.

Marta Volkova en Slava Shevelenko are born in St. Petersburg (former Leningrad), Russia. After their education at the art academy, they were active during the 1980s in the underground scene of St. Petersburg, which functioned as the alternative to the official art of socialist realism. Since 1991, Volkova and Shevelenko reside and work in the Netherlands, where they rebuilt their lives and careers. They have been working as an artist duo for more than ten years, and realise different projects together that often result in large spatial installations. They had solo exhibitions at, among others, The State Museum of Urban Sculpture in St. Petersburg (2005), Bonnefantenmuseum in Maastricht (2016) and The Dr. Guislain museum in Ghent (2020).