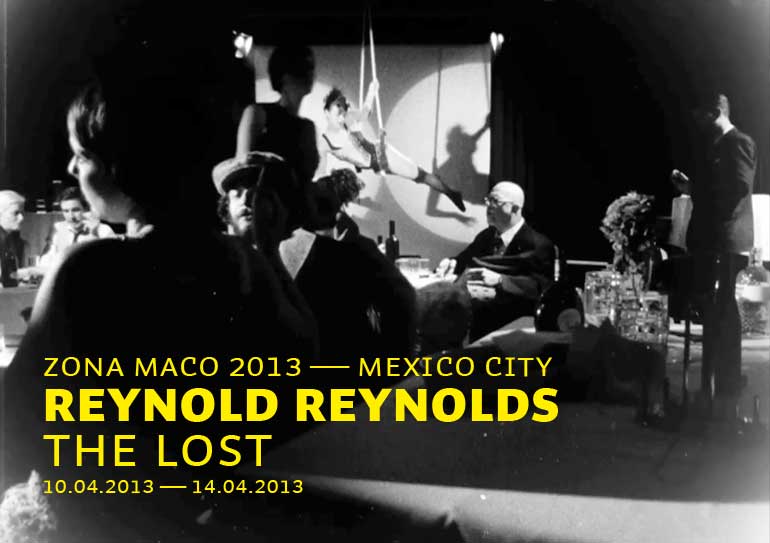 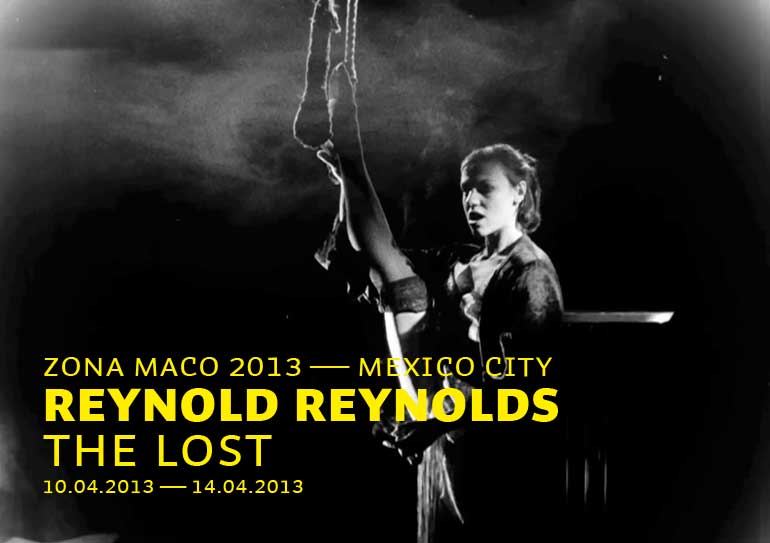 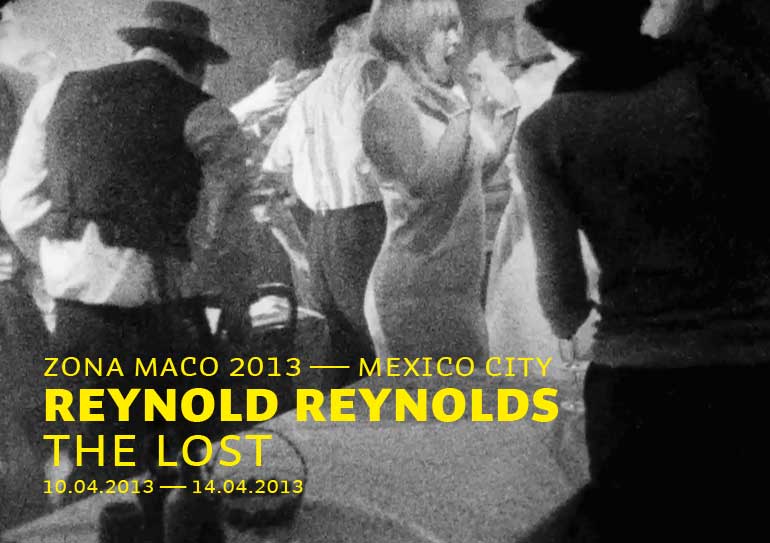 West is pleased to present:

Reynold Reynolds
Reynold Reynolds explores various aspects of human existence, using experimental films and installations. Due to the enthralling aesthetics, which are both cool and sensual, his work is strikingly impressive. The abundantly detailed set in which he works, forms the basis for his powerful visual expressive language. Reynolds uses for instance Stop motion: a technique with which movement is created by means of pictures that are placed in succession. In doing so, he shows in an aesthetic way that time is equal to movement and that ‘measuring-is-managing’ offers beauty.
ʻThe Lostʼ is a multifaceted project built around a two hour fictional black and white film shot in 1933 in Berlin but never completed due to the rise of the Nazi government. The project asks ʻWhat is Evil?ʼ, ʻWhat is Decadence?ʼ, and ʻWhat is the difference between the two?ʼ The story of the film ʻThe Lostʼ began as a commercial vampire film, with a plot experienced through the eyes of a young English writer, Christopher, living in a cabaret and hotel where an eccentric old man adopts young performers, dancers, artists and musicians to live and work.
In the different projections we can experience Reynolds fascination for cultural history, and how memories and imagination intersect. The archival research into time, arts and film censorship during the interbellum are an attempt to complete unfinished histories. Part of the project is filmed in front of a public in art galleries and theaters and the spectator can feel the energy and warmth of the artist in the excessive, energetic and overwhelming image of time.

Reynold Reynolds (1966, US) has recently had at solo exhibitions at the Haus der Kulturen der Welt, Berlin; Kunsthalle Vienna, Austria; Institut für Moderne Kunst Nürnberg; Kunstmuseum Bonn, Germany; and Museum of Modern Art, New York. Reynolds has participated in various group exhibitions all over the world, such as Made in Germany Zwei, Hannover, the Chelsea Art Museum, New Museum and PS 1 in New York; Bass Museum of Art, Miami; Bienal de La Habana, Cuba and 3rd Moscow Bienal of Contemporary Art. In addition, he has shown his works worldwide at dozens of film festivals. Reynolds work is part of the collection of MoMA, New York; The Neuer Berliner Kunstverein, Berlin; Lyon Museum of Contemporary Art, Lyon; Museum of Old and New Art, Australia and the Julia Stoschek collection, Düsseldorf.

Vincent Ganivet
The impressive installations of bricks by Vincent Ganivet are very delicate, despite the strong material they are made of. They emit an elegance which results from a deep belief in structure and the power of authentic material. As much as Ganivet’s Caténaires, Arches and Roués suggest solidity and permanency, they are not eternal but rather a metaphor of fate. Ganivet loves to transform the meaning of everyday objects and situations and to enjoin great tension on the viewer. By starting a dialogue between nature and culture, past and present, art and the ordinary in his work, Ganivet transposes Arte Povera to the 21st century. West presents an installation of bricks that is constructed on-site for Zona Maco 2013.
The work of Vincent Ganivet (1976, FR) was recently shown at Museum of Modern and Contemporary Art in Nice; Mudam, Luxembourg; Musée d'Art moderne and Palais de Tokyo, Paris; and at Artmandat, Barjols; Staatliche Kunsthalle, Karlsruhe, Germany ; Le Confort moderne, Poitiers; Fiac Paris, 2010, 2011; Fonderie Darling, Québec; La Casa Encendida, Madrid; Galerie Yvon Lambert, Paris and West, Den Haag among other places.

Jan van der Ploeg
In the monumental wall paintings and the intimate canvases of Jan van der Ploeg, a minimalistic vocabulary of forms meets a magnificent, endless spectrum of colors. In the tradition of Piet Mondriaan’s neoplasticism and the De Stijl movement around Theo van Doesburg, Van der Ploeg handles an abstract and geometrical language, but adds an inexhaustible range of colors, most of them exclusively mixed. By mastering the art of variation, Van der Ploeg renews a space and removes its functional appearance. Grip is a shape from Van der Ploeg’s repertoire that provide volume and movement in an apparently two-dimensional world. Whether in public, in an exhibition space or on canvas, Van der Ploeg configurates our perception by means of shapes, color shading and repetition and makes us discover a new dimension that rises high above color intensity, geometry and abstraction.

Ad van Denderen
Ad van Denderen is one of the leading Dutch photographers. Since 1965 he has become well-known for numerous reportages that he made abroad for magazines like Avenue, Geo, Stern, The Independent, NRC Handelsblad and Vrij Nederland. Unlike many photo journalists, Van Denderen is less interested in that one, unique news picture. With a slower, more contemplative way of working he attaches to a movement that is known internationally as ‘slow journalism’. For years he focuses on a limited number of current issues such as the problem of illegal migration and developments around the Mediterranean area. Each project differs from the next one, not only in the issue that is brought up, but also because of the investigative approach of Van Denderen. The viewer can watch his perspective changing: from objective to almost obsessive. Color, brightness and composition enhance the informative aspects of the pictures. Human relationships always play the leading role.   Ad van Denderen’s (1943, NL) work has so far been exhibited in various museums: amongst others in the Museo Nacional de Bellas Artes, Santiago de Chili; Dutch Photo Museum, Rotterdam; Museum FOAM, Amsterdam; Stedelijk Museum, Amsterdam; Photo Museum Winterthur and the Bellevue Art Museum in Seattle. In recognition of his achievements in the field of photo journalism, in 2008 Van Denderen received the prestigious oeuvre award of the Dutch Foundation for Visual Arts, Design and Architecture (Fonds BKVB), in 2002 the Dick Scherpenzeel Award and in 2001 the Visa d’Or award in Perpignan, France.

Harmen de Hoop
Harmen de Hoop examines conventions in society. Specific spots in public space are anonymously manipulated. De Hoop moves objects, people and animals whereby the interpretation of the (conditioned) surroun­dings becomes different. Earlier De Hoop painted outlines of a basketball field on a parking lot, placed a coat rack on a tram stop and restored a used pedestrian crossing. Occasional trespassers could doubt reality while confronted by these absurd situations. Is it not strange that a child plays football on a small traffic island with grass? Or what is the usefulness of a fire extinguisher attached to an information board? Are balloons tied up on a ‘ready-made’ statue art? These interventions in the urban surroundings are not always easily recognizable as art. However, in the context of the exhibition space or an art fair, the images of these interventions and manipulations become irrevocable recognizable as art. Art which assumes an idea and refers to the space. Where De Hoop, very often casually, criticizes town planners, architects and others.

David Horvitz
David Horvitz did travel to the Eastern most point of Hong Kong, Ping Chau, to view the sunrise. He will then follow the sun to the western most point, Peaked Hill, for the sunset. Like in ‘Public Access’, the photographs made at these times and locations, are placed onto the Wikipedia pages of the two locations, and these ocean views will openly circulate through digital distribution channels. Following the sun, Horvitz pays attention to the natural cycle of the day. Before the invention of the clock, time was determined by one’s exact physical location and the exact position of the sun in the sky. Time was a relationship with both one’s location and with the grand field of the celestial. In ‘Hong Kong’, Horvitz attempts to rekindle this lost relationship to time.

David Horvitz (1981, US) graduated with a M.F.A. from the Milton Avery Graduate School of Arts at Bard College. He exhibited amongst others at West, The Hague, The Wattis Institute, San Francisco; with Rhizome at the No Soul For Sale event at the Tate Modern, London; SF Camerawork, San Francisco; Nexus, Philadelphia; Art Metropole, Space, London; Golden Parachutes, Berlin; New Museum, New York. In 2011 he was awarded the Rema Hort Mann grant and nominated for the Discovery Award at the photography festival in Arles, France and will present his work at Statements, Art Basel 2013.