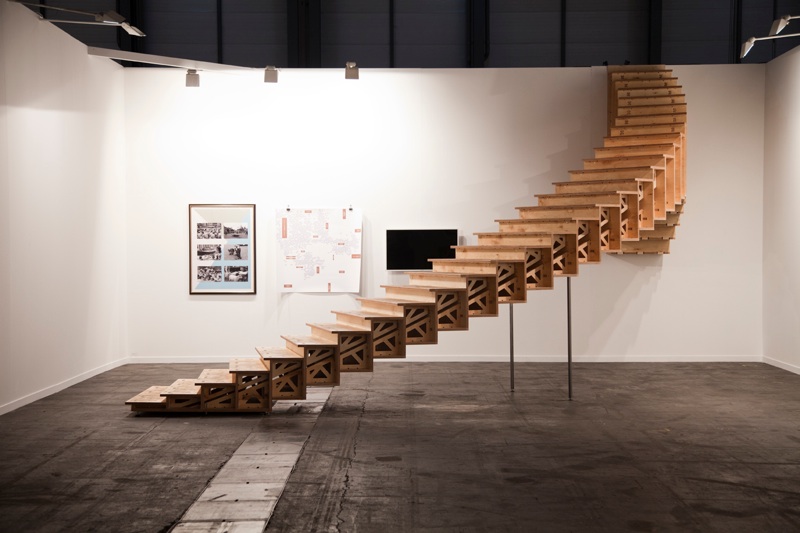 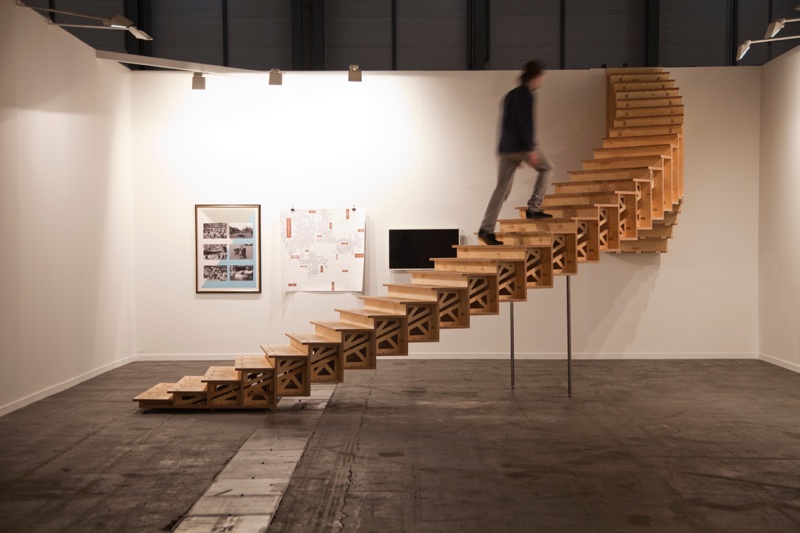 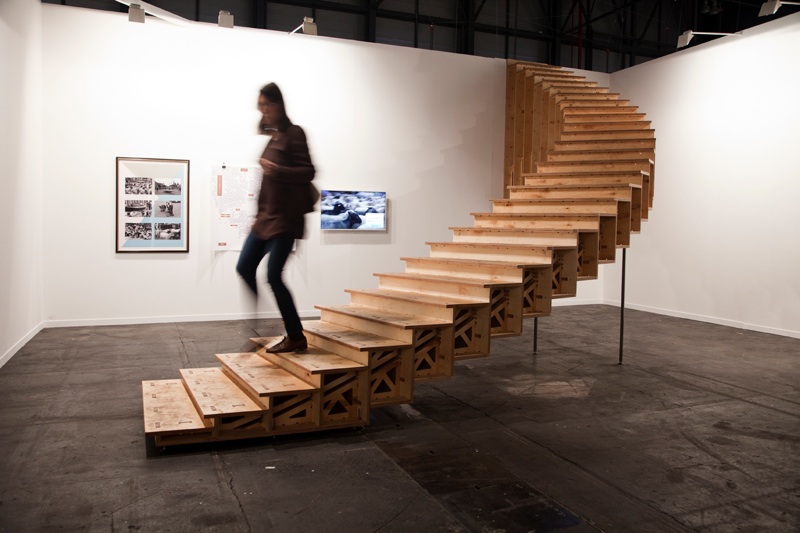 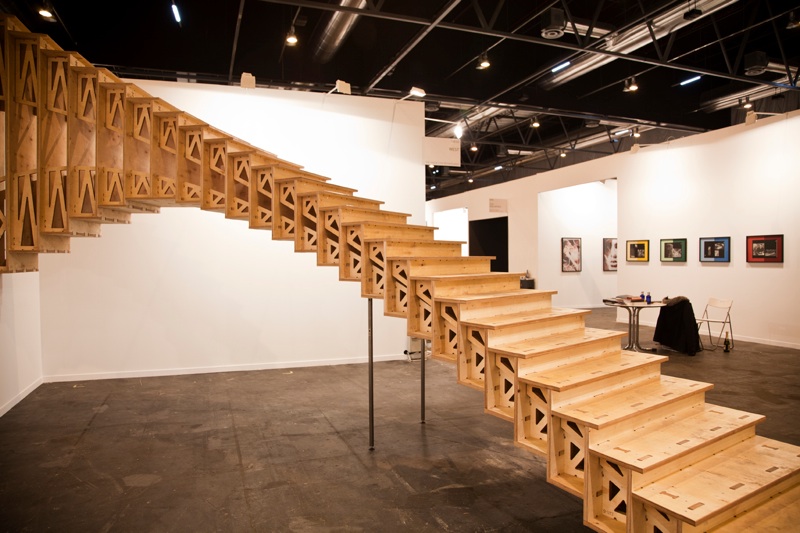 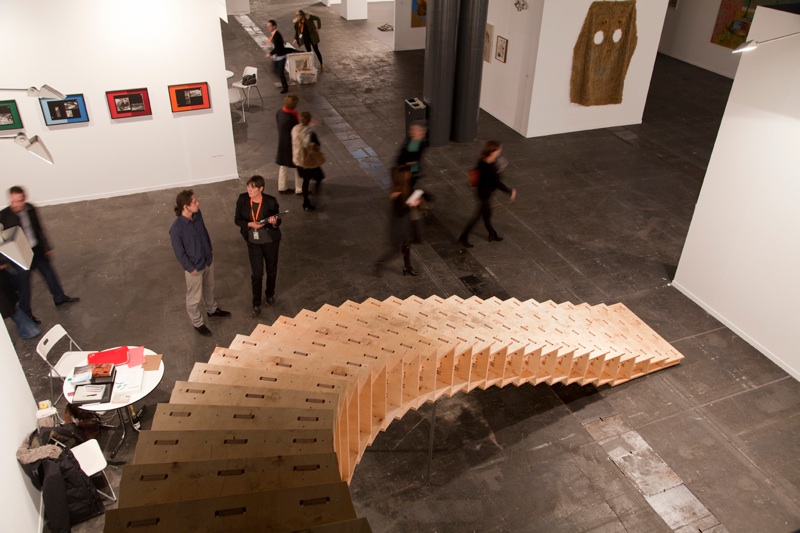 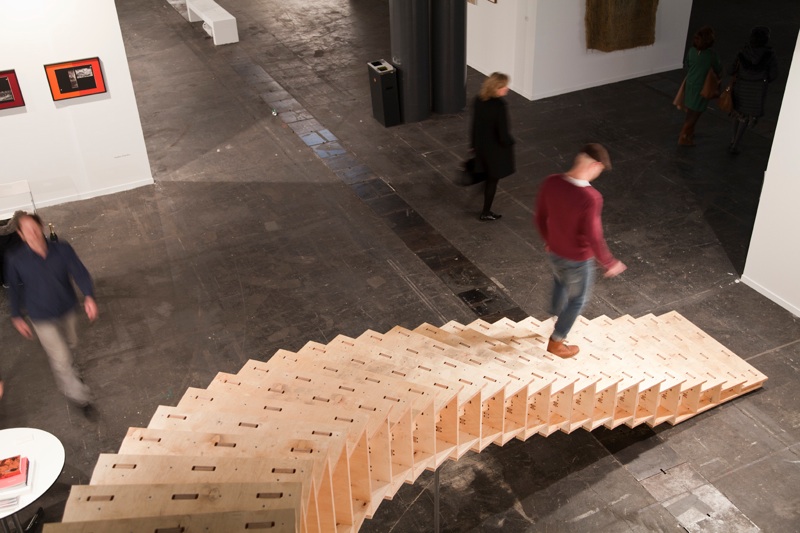 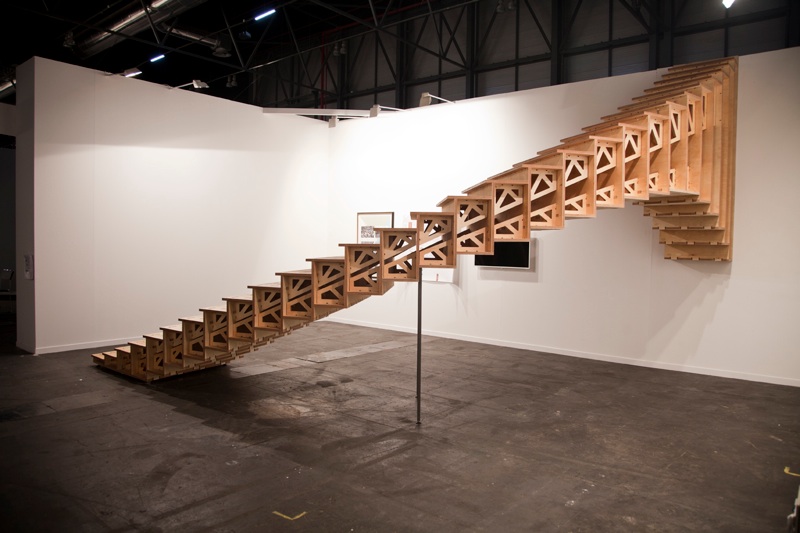 After the success at Arco madrid 2012 with his installation ‘Superstructure’, Niens shows a brand new site-specific, large-scale installation called ‘Revolver’. This time, Niens has avoided any of the physical ‘obstacles’ that he used in his previous site-specific installations, such as narrow passages, heavy-weight or closed doors. For Arco madrid 2013 he has chosen to make an installation/staircase, a well-known shape, as a structure in which the visitors are invited, instead of challenged. Inspired by the structure of the art fair and the function of the space, the artist has made an extensive intervention. The object is almost entirely in the service of a form that is usually eliminated. The fair visitors will automatically walk up the stairs and are drawn to look again at the space. The staircase leads to a ‘non-space’, almost a room that is not used by the fair. Thus Niens shows visitors the artificial world of the art fair and – in a way – the backside of reality. ‘Revolver’, in its entirety, has been made of sheet material, which has accurately been carved into wooden elements, using CNC milling techniques. The architectural objects of Niens create spaces that seem without function at a first glance. Physical obstacles such as narrow corridors or locked doors increase this feeling but are at the same time the core of his work. Fascinated by conventions and the human (group) behaviour, Niens searches for limits with his work and confronts the audience with his idea about privacy, determination and solidarity. He constructs interventions which change their meaning of space both inside a building and in open air.
Jasper Niens (The Netherlands, 1980) showed work at, among others places, Art Basel Miami Beach 2010; NADA 2009; Arco Madrid 2012; Gemeentemuseum, Den Haag; Tent, Rotterdam; Site-actions, Zaragoza, Art Zuid, Amsterdam and West, Den Haag. His work is part of several private and public collections.

The new project ‘Small Boats and Sheep Day’ shows two groups that come together. On a Thursday in September 2012, the artist duo created a performance on the market of Ghent.
The two gatherings, boats and sheep, are a confusing and impossible combination. Only coincidental trespassers witnessed this intervention in public space. The action was done within the framework of the exhibition TRACK 2012 and is now presented, for the first time, in a unique triptych (panel with photos, layout drawing and a video).
The Italian-Belgian artists Denicolai & Provoost launch a playful muddle about the role of the artwork, the influence of its surroundings, authenticity and its existence as incidental remains of an original idea. Simona Denicolai & Ivo Provoost withdraw art from each form of ivory-tower context. They are aspiring art which enables a feedback to the economic and social reality in our society. They make use of multimedia instruments inside the aesthetic and political intimacy of their artistic method.
Denicolai & Provoost previously exhibited at, among others places, SMAK, Network and WIELS in Belgium, at the Van Abbemuseum, Netherlands; Galerie Aliceday, Belgium and CNEAI in Paris and at the eArts Festival in Shanghai. They took part in the Biennale of Pancevo 2004, the Bucharest Biennale 2006, the Lyon Biennial 2007 and in 2010 the Biennale of Rennes. Their work is part of several private and public collections.