Silencio (17 min, 2007) About a soundman and his vain search for silence.
Eternity (105 min, 2010) Tiger Award 2011 winning debut feature film: After his death, a man returns to the landscape of his childhood and relives the relationship that was meant to last forever. Eternity is a romantic and spiritual film as well as a meditation about the death of a loved one.

Arin Rungjang (1975, Thailand) makes conceptual work from a very personal point of reference. He shares everyday activities with the audience and thus crosses the barrier between the private and public domain. His aim is that the observer will begin to re-evaluate his environment and reflect on places, objects and people. Arin Rungjang recently had exhibitions, at the Singapore Biennale, Singapore; Kadist Art Foundation, Paris, France, P.S.1 Contemporary Arts Center, New York, USA and at West, Den Haag (2007).

Sivaroj Kongsakul (1980, Thailand) has, since 2002, directed 10 short films including ‘Always’ and ‘Silencio’ which were both invited to the Clermont-Ferrand Short Film Festival where they won awards. In 2010 he directed his debut feature ‘Eternity’. ‘Eternity’ is a meditative film about his father’s soul and his development according to Thai religion, about his parent’s love life and about his own life. It is a very personal, contemplative movie about the process of losing. At the Rotterdam Film Festival 2011 it received a Tiger Award.

Moritz Ebinger (1961, Switserland) is an artist and curator for Nieuwe Vide Haarlem.

Let's make sense
Arin Rungjang has together with Kornkrit Jianpinidnan, Chitti Kasemkitvatana, Sivaroj Kongsakul, Shooshie Sulaiman and Rirkrit Tiravanija created a complete new installation at West. The cultural difference will form the starting point for these Asian artist friends, and thus in addition the similarities between The Netherlands and Thailand. The framework is shaped by ideas and objects, and their distance with regard to each other. ‘Let’s make sense’ is a concept based on the idea that an event or situation can function as a platform on which the cooperation between various artists, and the attuning of objects and places become a shared experience. Rungjang managed to involve five contemporary visual artists in this project, and in doing so he aims to bring people together and create a channel to exchange ideas.
The basic principles centre around 4 Thai recipes by Rirkrit Tiravanija, which were presented in a suitable environment created by Kornkrit Jianpinidnan, Chitti Kasemkitvatana and Shooshie Sulaiman. However, this installation will not be complete without visitors; people who come to sample the food and start a dialogue with the artists and each other. The opening was recorded by Sivaroj Kongsakul and can be viewed for more than a month in West’s three different exhibition rooms, together with the installation. 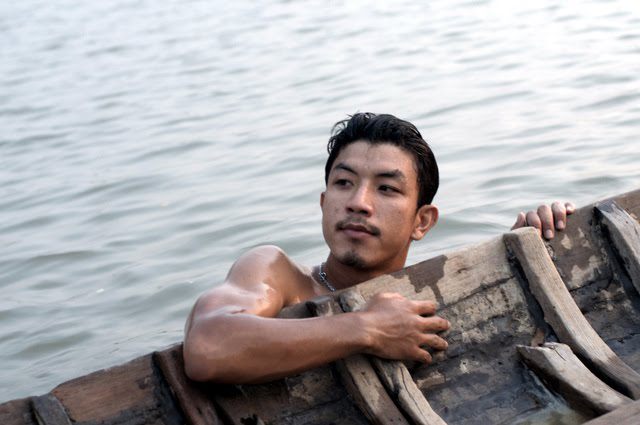