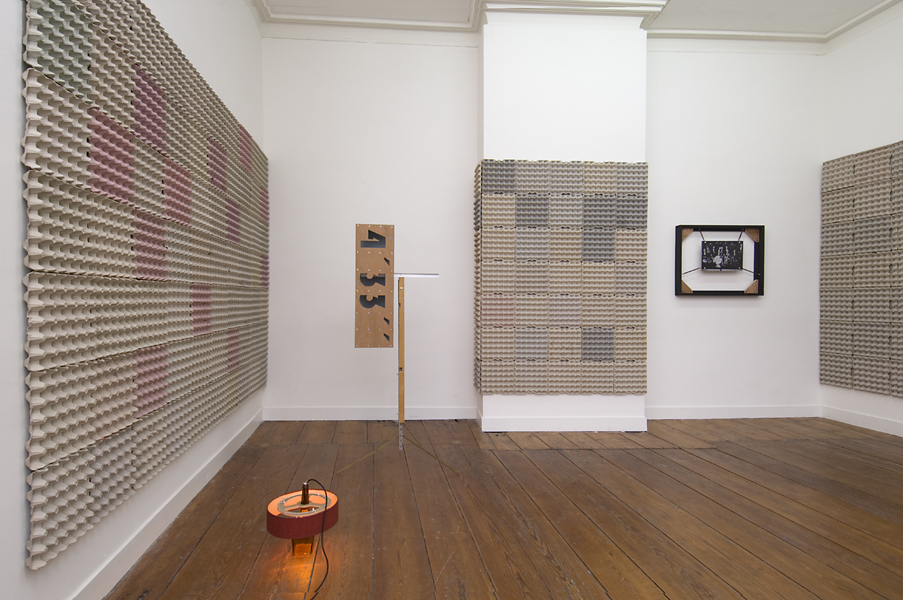 Sigmund Freud defined the term Wiederholungszwang as a motivation for the human being to repeat certain situations. The Austrian artist Michael Gumhold works with repeating and changes West into his personal rehearsal room. He is showing his work for the first time in the Netherlands. We eagerly await the performance of The Sculpture Group˚ and invite you to visit the first exhibition of the new year.

Michael Gumhold (1978, Graz, Austria) is a trained sculptor and the sculpture is definitely the main issue in his work. His objects however have been taken off the pedestal and contain more than three dimensions. He mixes well-known elements into a surprising integrated whole. Fragments of song lyrics, mathematical and chemical terms, acoustic engineering instruments and incunabels from art history are presented to the audience. Gumhold clearly refers to his great idols such as Marcel Duchamp, Joseph Beuys, Bruce Nauman and Marcel Breuer and to icons of music like Michael Jackson and Frank Zappa. He also refers continuously to himself by letting self-made objects return in another time and in another space. Because repetitions work. Because repetitions work. The concept of recycling is his manner of generating new meaning of putting the audience to the test.
Gumhold’s Moonwalk Dancefloor (2009) is made in a tradition of Minimal Art and refers to pop music. The object invites itself to be stepped on and moved on it but at the same time the artist questions the usefulness of this particular way of moving. It is certainly not part of human nature that people move in reverse. As a viewer you may nod at first glance but one moment later you will be stunned by the contradiction. Paradoxes are one of Gumhold’s specialties.
Even if music is an important component of his work there is not a sound audible. The amplifier, the microphones and the instruments of The Sculpture Group˚ are supernumeraries in constantly changing arrangements. The cassette tapes building the Wall of Sound (2009) do not turn and the egg boxes on the wall amplify the silence rather then the sound.
Gumhold also, very obviously, leaves out the human figure in its installations and summons his public to participate. He is with his visual paradoxes at the same time drummer, conductor and producer of his own show.
At West: Michael Gumhold feat. The Sculpture Group˚ - On stage. Now!
Gumhold has previously exhibited among other places at Georg Kargl Fine, Vienna, at Westwerk, Hamburg, at Forum Stadtpark, Graz, at Gallery Polvo, Chicago, at the Slought Foundation, Philadelphia and repeatedly at Art Forum Berlin, Art Basel, Armory Show and Arco Madrid.

We are happy to invite you to the official opening in the presence of the artist, on Wednesday 13th of January at 18:00.