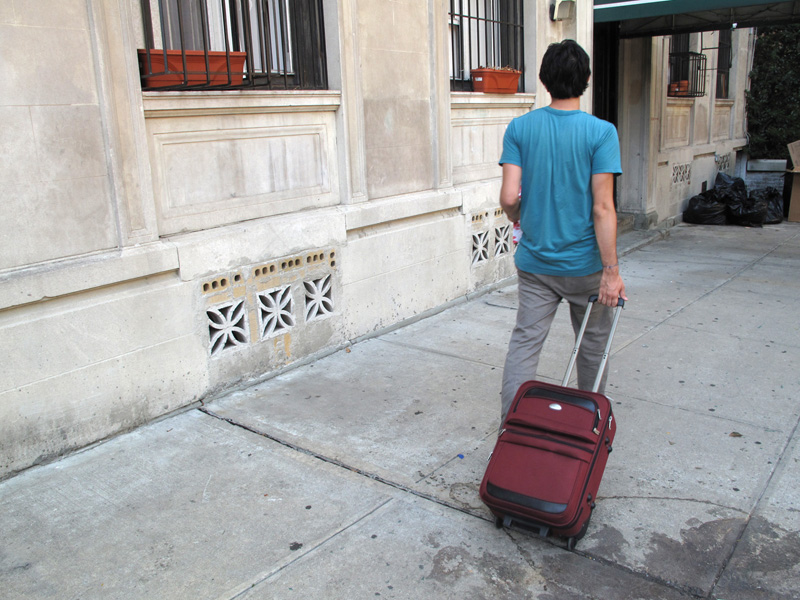 West is proud to present the first European solo exhibition of the young American artist David Horvitz. The exhibition is part of a serial of exhibitions which West is organizing that is dedicated to promising young artists from outside the Dutch borders.

You can make something (or make something happen) anywhere at anytime in any circumstance. These words are not a banal and furthermore sloppy translation of the American Dream, but the principle that David Horvitz, artist and chronicler, is applying in his work. At West, he is presenting his first solo exhibition in the Netherlands, including a multi-artist project that he organized, as well as photographs, paintings, video, publications, and ephemera.

David Horvitz (1982, USA) used to work in a 1-hour photo lab where he not only printed the customer’s photographs, but also reproduced his own art works. Drawing from Michel de Certau’s concept of la perruque, this can be understood as exploiting time at work for the opening up of a creative potential. Outside a studio environment, Horvitz developed the Polaroid Projects, where he accepted people’s unused Polaroid film, used it to make photographs while touring with the band Xiu Xiu across North America, and then sent the Polaroids back to those who had originally given it to him. Horvitz’s work is characterized by tangibility and its autonomy from a studio and exhibition space. He makes art to take with you, and art that moves around. What you get out of Horvitz’s work is a poetic experience - one that resonates with a combination of romance, absurdity and apparent exclusiveness.

Carry –on (2010) is a multi-artist project organized by the young artist and integrated in his show at West. Horvitz asked a number of artists to pass one of their works to him, which he then carried to The Hague in his carry-on luggage. In transit, the works were never left alone, not even for a moment. By carrying the objects with him continuously, he takes full responsibility.
Horvitz will also present the video Newly Found Bas Jan Ader Film (2006) in a new installation. The video, originally uploaded to Youtube, had gotten Horvitz into a little bit of trouble in Los Angeles.
In the third room of West, Horvitz’s vast publishing career will be presented. This includes books, zines, vinyl records, newspapers, posters, and magazines. Also included will be a few of his previous multi-artist projects, which could be close to the work and contributions by 100 other artists.

Organizing and exhibiting multi-artist projects is part of Horvitz’s practice as an artist. He creates a framework to distribute, reproduce, and display other artists’ work. For him, this framework is his work.

David Horvitz graduated in 2010 with a M.F.A. from the Milton Avery Graduate School of Arts at Bard College. He exhibited amongst others at West, The Hague, The Wattis Institute, San Francisco; with Rhizome at the No Soul For Sale event at the Tate Modern, London; SF Camerawork, San Francisco; Nexus, Philadelphia; Art Metropole, Space, London; Golden Parachutes, Berlin; Sign, Groningen. He was commissioned to do a publication for last year’s New York Art Book Fair, and recently released the flip book Rarely Seen Bas Jan Ader Film on 2nd Cannons Publications. This October he will be in an exhibition curated by Lauren Cornell at the New Museum, New York.

We are pleased to invite you to the official opening during ‘Museumnacht Den Haag’ on September 4 at 19:00.
For press photo’s or more info please contact us via info@west-denhaag.nl or call 0031(0)70.392.53.59
David Horvitz is in The Netherlands until September 11th and will be available for interviews.