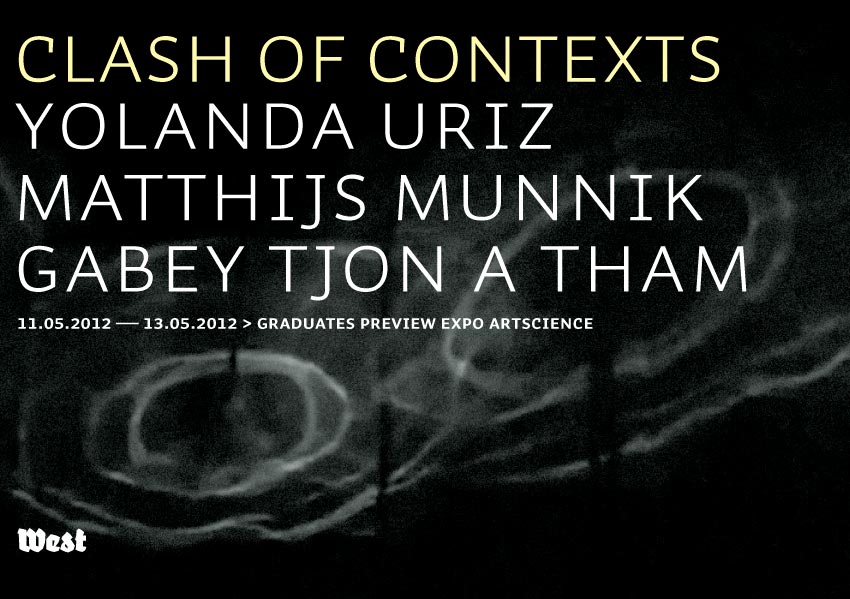 Think of a merger, an unexpected meeting, a new development.

All of these and more may happen where contexts clash and ideas collide. Thus it is with this preview of ArtScience graduates’ new work. It contains lifeforms, organic progressions, nature unbridled and nature harnessed. It contains the artificial, the manufactured, the machine. It takes elements from one and injects it into the other, tearing each apart to rebuild as another. Exchanging ideas, cannibalizing (them).

This clash, is of course not limited to art and science, it can occur everywhere, and makes for much confusion in understanding the world. But whereas in our environment so much is obscured by distance, confusion and the constant battle of everyday life, things may become clearer when seen at such close quarters, where elements that normally seem unconnected come together. It makes for a simplified version of the world, a version that still retains all of its complexity. Where each thing changes the context of the next, in endless permutations.

It is through such a clash of contexts that it becomes possible to see that despite everything, any one thing explains any other. For what is a clash, but violent meeting?

At the ArtScience Interfaculty students and teachers are developing forms of art that relate to society in the 21st century. The Interfaculty is a collaboration between the Royal Conservatoire, the Royal Academy of Art and the Academy of Creative and Performing Arts of Leiden University.

Every year the ArtScience Interfaculty puts together a research programme guided by current themes from the area where art, media, science and technology overlap, with the aim to probe recent developments in science and technology for their artistic potential. Part of this research process is to be a partner in the dialogue within society about the transformations caused by the developments in science and technology, with the aim to draw conclusions with regard to the contexts and forms in which art can play a role. This discussion is continually related to an interdisciplinary base in which the confluence of media art, music, theatre, film and visual art is considered as self-evident. The Interfaculty is entering its twentieth year, but – like the world it is part of – the contents and structure of its programme are continuously transforming.

The Interfaculty aims to contribute to the development of the field of the arts. Our alumni have played a considerable role in the developments in areas like live cinema, theatrical performance and sound art. The Interfaculty regularly presents projects outside of the walls of the institution. By way of such presentations and by publications, we hope to contribute to the discussion about the relations between art, science and technology.

In his book ArtScience (2008) David Edwards cites many examples from the worlds of science, art, civil society and industry that show how transposing ideas or strategies from one field to the other often results in radical innovation. ArtScience for him is an intermediate area of creativity where art nor science are clearly defined: stimulating this zone he considers to be one of the key strategies to foster innovation. The core idea that makes such collaborations and intermediate zones interesting is that art and science are both considered as types of research, and that they are thought to be complementary in many ways. Where science maintains an aura of objectivity and detachedness, in art subjectivity and critical engagement tend to be favoured. Where in science peer-review is the norm, artists are expected to be iconoclastic and original. Where science is expressed in formulas and text, art often exists through non-verbal experience. Ultimately, however, art and science share the aim to enlarge the scope of our ideas about the world. By inventing new media and new artistic languages, art can create new worlds of experience. By widening our imagination it also creates new kinds of thinking, as we can not think about the things we can not imagine.