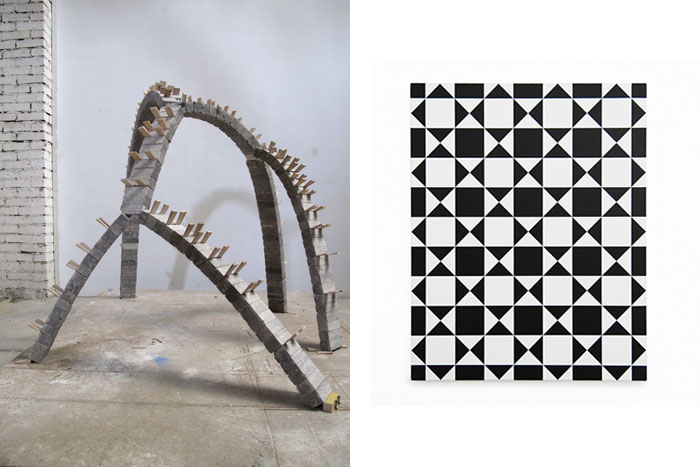 At FIAC 2010, West presents work of one of the most spectacular young French artists at this moment, Vincent Ganivet, and of the international successful Dutch painter Jan van der Ploeg.

Vincent Ganivet’s (1976, France) impressive installations of bricks are very delicate, despite the strong material they are made of. They emit an elegance which results from a deep belief in structure and the power of authentic material. As much as Ganivet’s caténaires, arches and roués suggest solidity and permanency, they are not eternal but more a metaphor of fate. Ganivet loves to change the meaning of everyday objects and situations and to enjoin great tension on the viewer. By starting a dialogue between nature and culture, past and present, art and the ordinary in his work, Ganivet transposes Arte Povera to the 21st century. Besides objects made of, among other things, mirrors, West presents a new installation by Ganivet made of stone that was especially constructed for FIAC.
The work of Vincent Ganivet was recently shown at Musée d'Art moderne and Palais de Tokyo, Paris, Artmandat, Barjols, 40m3, Rennes, Le Confort moderne, Poitiers, LaBox, Bourges, Entre-deux, Nantes, La Station, Nice, Fonderie Darling, Québec, in La Casa Encendida, Madrid, in Copenhagen with Le Commissariat at Galerie Yvon Lambert, Paris and West, Den Haag amongst other places.

In the monumental wall paintings and the intimate canvases of Jan Van der Ploeg (1959, The Netherlands), a minimalistic vocabulary of forms meets an endless spectrum of colours. In the tradition of Piet Mondriaan’s neoplasticism and the De Stijl movement around Theo van Doesburg, Van der Ploeg handles an abstract and geometrical language, but adds an inexhaustible range of colours, most of them exclusively mixed. By mastering the art of variation, Van der Ploeg refaces a space and takes off/removes its functional appearance. His wall paintings absorb the atmosphere of a place and leave behind an inexpressible energy. Grip and Wave are two shapes from Van der Ploeg’s repertoire which provide volume and movement in an apparently two-dimensional world. In public, in an exhibition space or on canvas, Van der Ploeg configurates our perception by means of shapes, colour shading and repetition and makes us discover a new dimension that rises high above colour intensity, geometry and abstraction. During FIAC, West is presenting new paintings on canvas by Van der Ploeg, in black and white only, subtly referring to Op Art.
Van der Ploeg recently had solo exhibitions at the Hammer Museum, Los Angeles, at MINUS SPACE project space, New York, at The Suburban, Chicago, at SNO, Sidney, at the Waikato Museum of Art and History, Hamilton, New Zealand, at CCNOA, Brussels, at Museum Boijmans van Beuningen, Rotterdam and at the Gemeentemuseum, Den Haag, amongst others. He participates in numerous international and national group exhibitions and exhibits frequently at Aschenbach & Hofland Galleries, Amsterdam, Hamisch McKay Gallery, Wellington, New Zealand, Sarah Cottier Gallery, Sidney and Galerie West, Den Haag.

We would be very happy to welcome you to FIAC and invite you to visit booth E23 at Cour Carrée du Louvre.  For high res. photos or more information you can contact us via info@galeriewest.nl or +31(0)70.3925359.