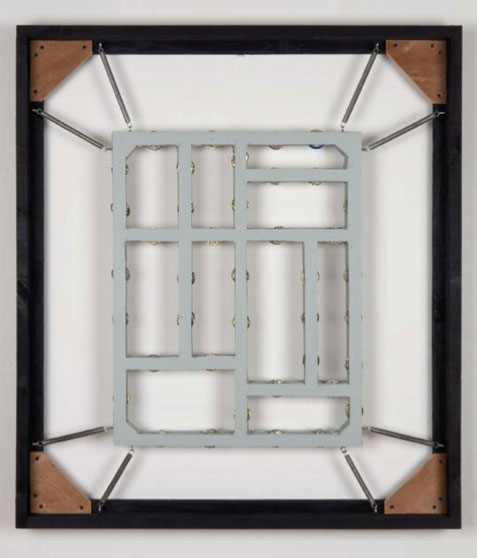 As interviews go, this one doesn’t. sitting in Michael Gumhold’s Vienna studio I’m beginning to feel as if I’m responsible for having introduced the thirty-three-year-old Austrian artist to a peculiar new form of torture. “I feel like I’m back in school” he complains between cigarettes. I’m smoking too.
On the one hand this (the awkwardness of the interview, - not the smoking) is odd; I’ve known Gumhold for a while. we first met in 2009, following his solo exhibition, [: The : Complete : Rehearsal : Room : Recordings :], at Vienna’s Georg Kargl Fine Arts and have been meeting and chatting regularly ever since. But now that I’ve put a recording device on the table, turned it on and started looking at him expectantly he’s clamming up. And yet, on the other hand, a part of me is already considering that this kind of response shouldn’t be too surprising coming from an artist who often characterises his exhibitions – as in the case of the Kargl show – as a ‘rehearsal’ rather than a performance. 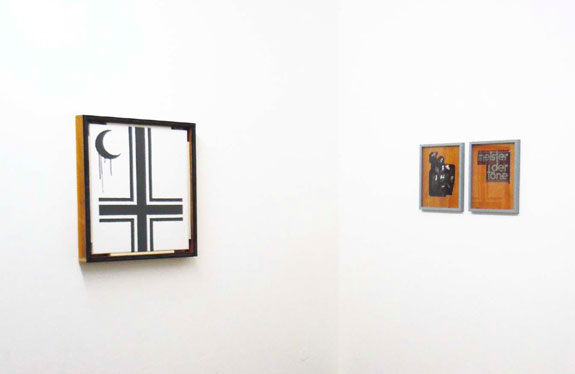 
Working across a range of media, Gumhold creates works of art that frequently feature word- and object-play, a rough aesthetic, and frequently refer to music (mainly rock and heavy metal) or other elements of popular culture. Among the works in that Kargl show, for example, was Untitled (PHIL spector) (2008– 9), which featured the name ‘Phil’ spelled out via a collection of audio cassettes, cable-tied together, and mounted on the wall. Nearby stood Untitled (corridor) (2009), a corridor of cassettes arranged in a manner reminiscent of Bruce Nauman’s iconic Performance Corridor (1969). The latter was the first of the American artist’s constructed environments and likewise, one of his first attempts to turn the viewer into an actor or performer rather than a spectator. Gumhold’s version is activated by an audience that walks between the walls of prerecorded cassettes, and who perform, in the context of Untitled (PHIL spector), a mental leap (whilst inside the corridor) that identifies their surroundings as literal ‘walls of sound’. Although there remains more than a little ambiguity about the last, given that whatever sound there is amongst the components of these walls is muffled by the obsolete format used to register it, and that a cassette without a player makes no sound at all.
It’s for moments like the spector–sound wall conjunction that Gumhold refers to the “world” in which his art is produced and operates as ‘The sculpture Group’. “It’s a play on words,” he explains, “because a sculpture group could be [the group of men in] Auguste rodin’s The Burghers of Calais (1889), or it could refer to the fact of being in a music band.” 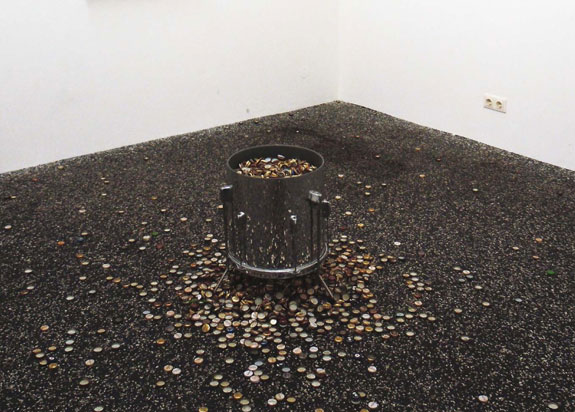 
Indeed, this kind of ambiguity reverberates through Gumhold’s work. At one point during our conversation he picks up what looks like a closed, antique book from next to a couple of large bags containing used beer-bottle tops. (In his hands, these may at some point become tambourine zils, or appear in an exhibition as the manifest trace of a moment of noisy intoxication.) He shakes the book, causing the collection of Japanese coins and paper clips hidden inside it to rattle, and demonstrating that it can be used as a tambourine. He then indicates that this sculpture, called Untitled (Logarythm Manual) (2010) – the misspelling is intentional, a fusion of logarithm (from the book title) and rhythm – is normally displayed, silenced, untouchable on a turntable. “I’m interested in paradox,” the artist says.
And still, we’re no closer to getting to the heart of the matter. After a while he points to the press release for another 2009 exhibition, this time at the Austrian cultural Forum in London, which described the artist as ‘a self-confessed failed musician’. At the time, I remember that he didn’t much appreciate the reference, but now struggling to explain himself he says, “I can live with that,” laughing. “Music is much more direct than visual art,” he continues. As if that’s why the musical reference might be particularly appropriate right now. “You work in the studio for weeks and weeks and weeks and then people see it for, let’s say, five or six weeks. when you do a show with your band it’s just, let’s say, twenty minutes of raw power and direct action.”

So why isn’t he a musician?

“I’m too shy,” he confesses. “Fifteen years ago I really wanted to start a rock band and I did it with some schoolfriends, but all of us – the drummer, the singer, the guitar player and myself – became visual artists in the end. I’m not the kind of guy who can be in front of an audience.”
“It doesn’t make sense to me to do a ‘noisy’ show,” he continues, emphasising that it is not merely a sense of shyness that shapes his art. “I see so many pieces by colleagues where they do ‘noisy’ pieces – it’s just a means of gaining attention. of course I’m always happy to receive some attention, but if it is a good piece it doesn’t have to be noisy. You know, probe is the German word for ‘rehearse’, but it can also mean to test or approve something. This is what a show is for me. It’s part of an ongoing series of arrangements or rearrangements of a moment.” Perhaps that’s why he finds it so hard to talk about his work. Because it never really stops. each work, each show, is a tentative statement about a conjunction of ideas that come together solidly as sculpture, but fleetingly as thought. Perhaps that’s the real reason why Gumhold is an artist, rather than a musician. And it’s probably why he finds talking about his work so hard. But that awkwardness, that sense of discomfort, is also what makes his art worth seeing.