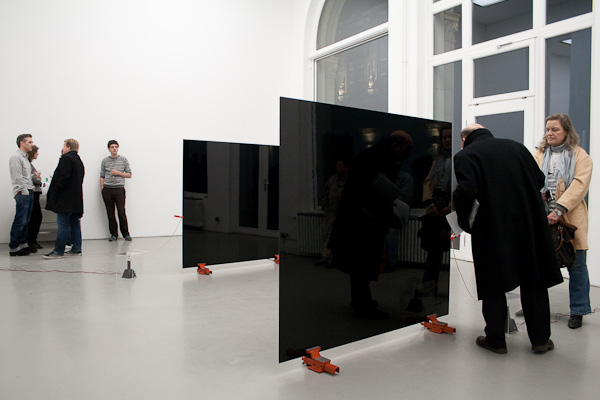 Minor Optics daadgalerie, Berlin, 2009. (photography: Krzysztof Zielinski)
The “dematerialization of the art object” (Lucy Lippard), which has been of eminent aesthetic importance at least since the 1960s, occurs in a new way in the work of Dane Mitchell. The artist from New Zealand is not so much concerned, as many of the conceptual artists of the first generation were, with a rigorous rejection of the commodity character of the work as he is with a general search for the essence of art as such. Mitchell’s investigations are primarily concerned with the marginal phenomena and transitions that largely escape ordinary (visual) perception. Using the methods of scientific logic and experimental demonstrability, Mitchell leaves clues to these marginal areas and invents forms for making them visible and displaying them.
The exhibition Minor Optics at the daadgalerie consists of two new works by Dane Mitchell, both of which, in different ways, refer reflexively to the art space. Several electrostatically charged metal plates placed in the gallery space accumulate over the course of the exhibition dust particles, which can be seen on the glossy surfaces of the plates. In the study of the environment of art and the art space, dust represents all the things, organic and inorganic, that can occur, since almost nothing is free of dust.
Working with the perfume maker Michel Roudnitska, Dane Mitchell developed a synthetic scent that corresponds closely to the smell of an empty exhibition space. Mitchell is trying to analyze the difficult-to- describe world of smells and thus provide information about what was previously unnamable or invisible. On the one hand, the exhibition Minor Optics draws attention to the spaces in which art is stored and presented and their conventional effects—very much in the spirit of a critique of institutional “customs and pathologies.” At the same time, in light of the exhibition’s title and with Deleuze and Guatarri’s concept of minor literature in mind, it introduces a tendency to deterritorialization that blurs boundaries and expands the limits of perception.