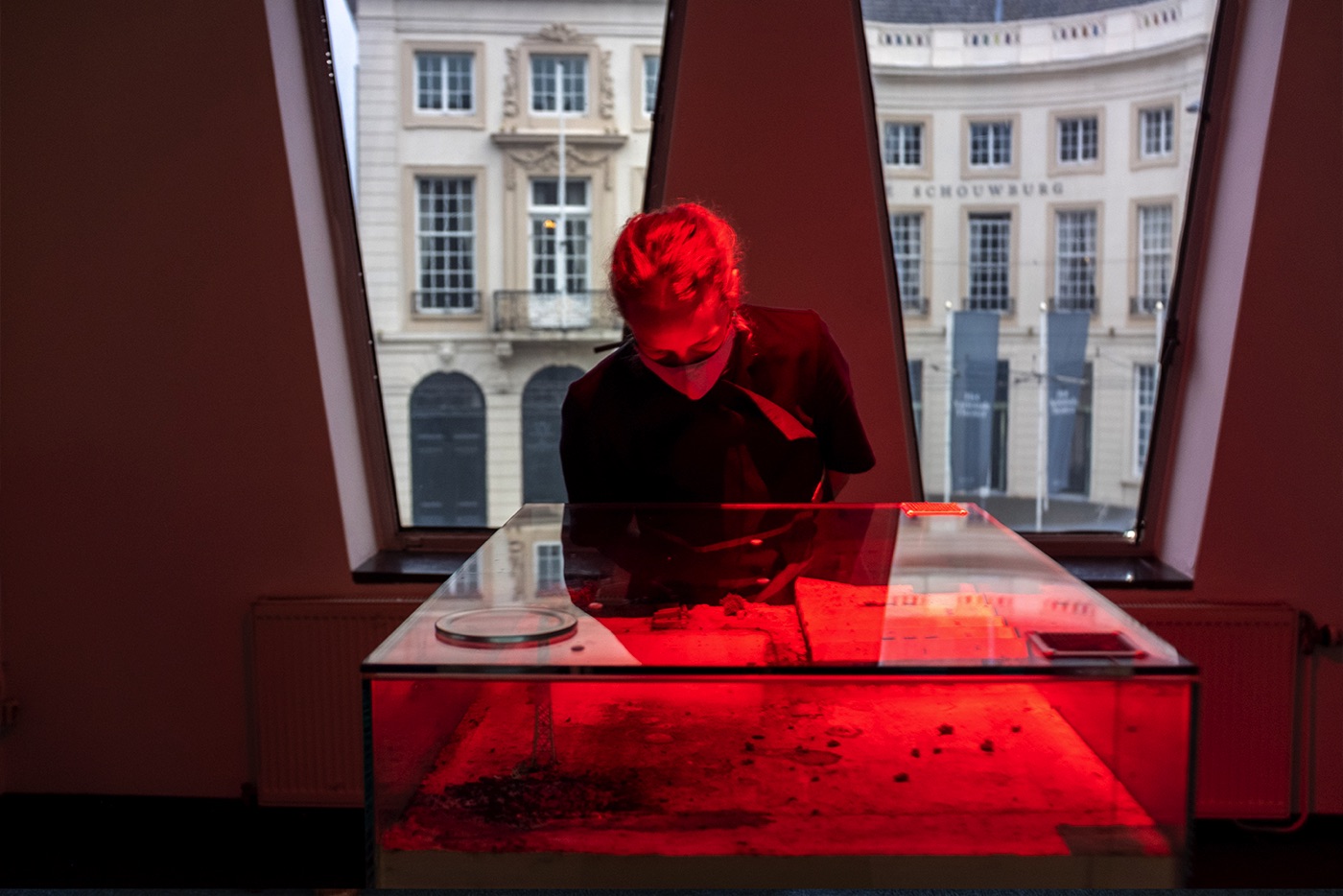 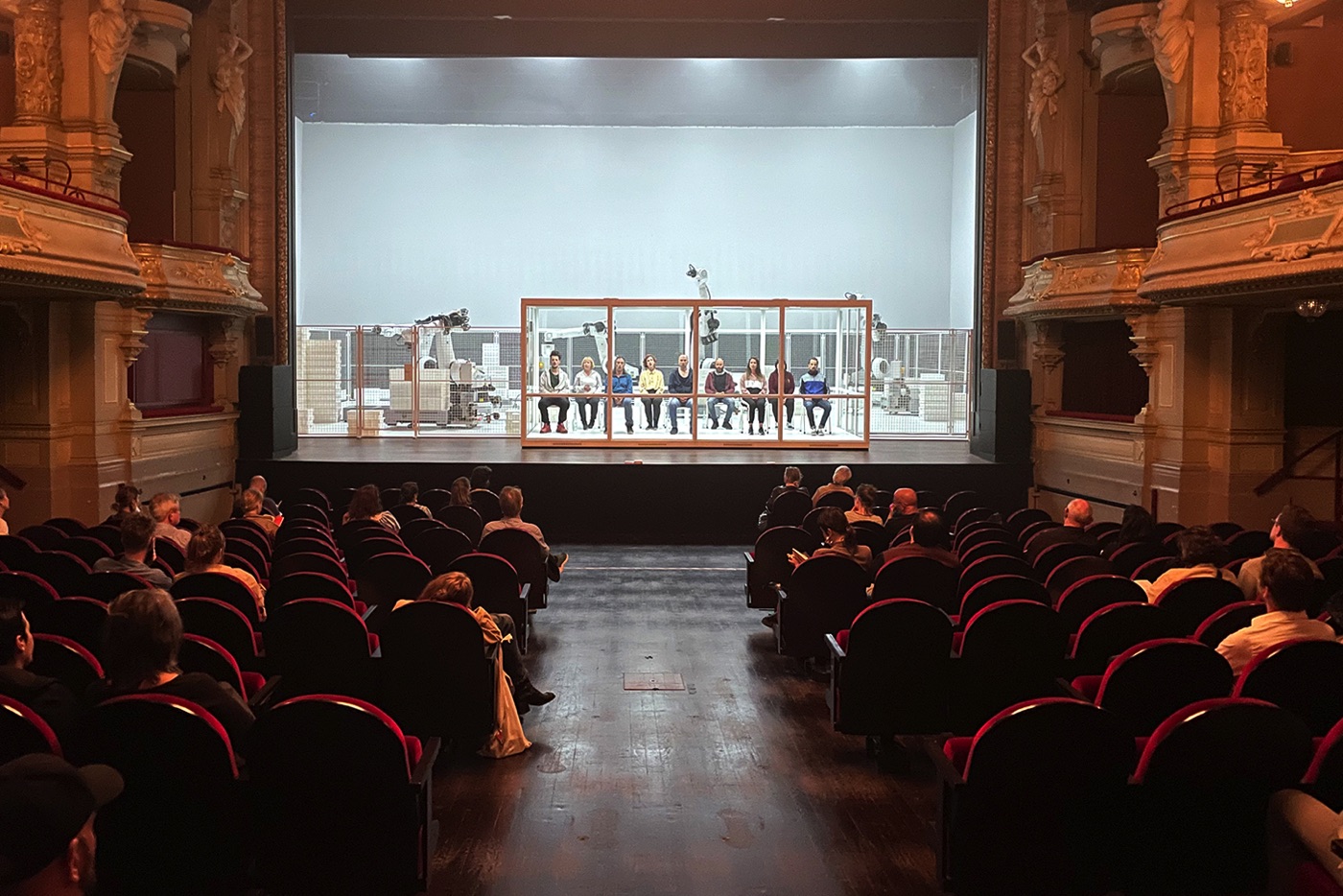 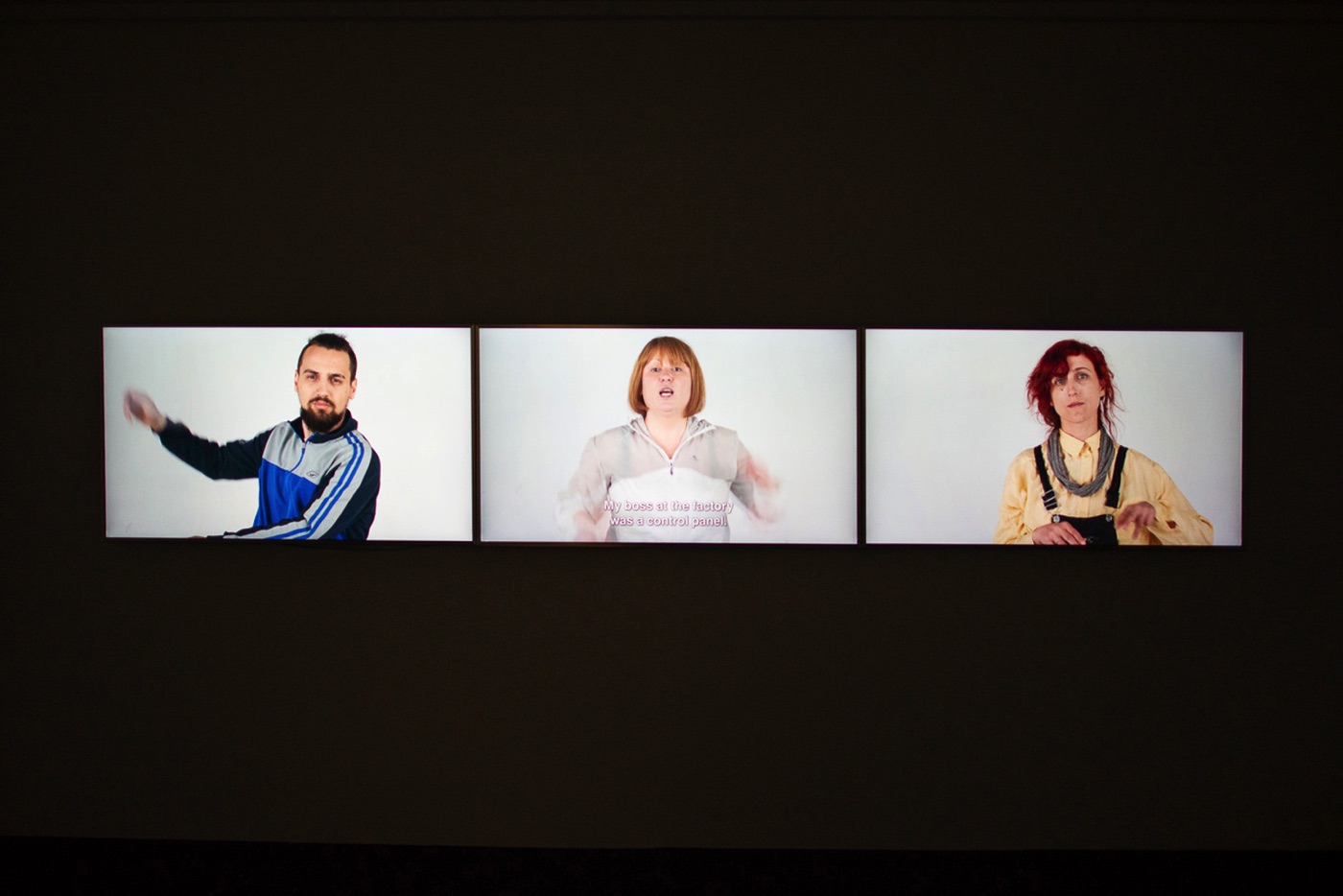 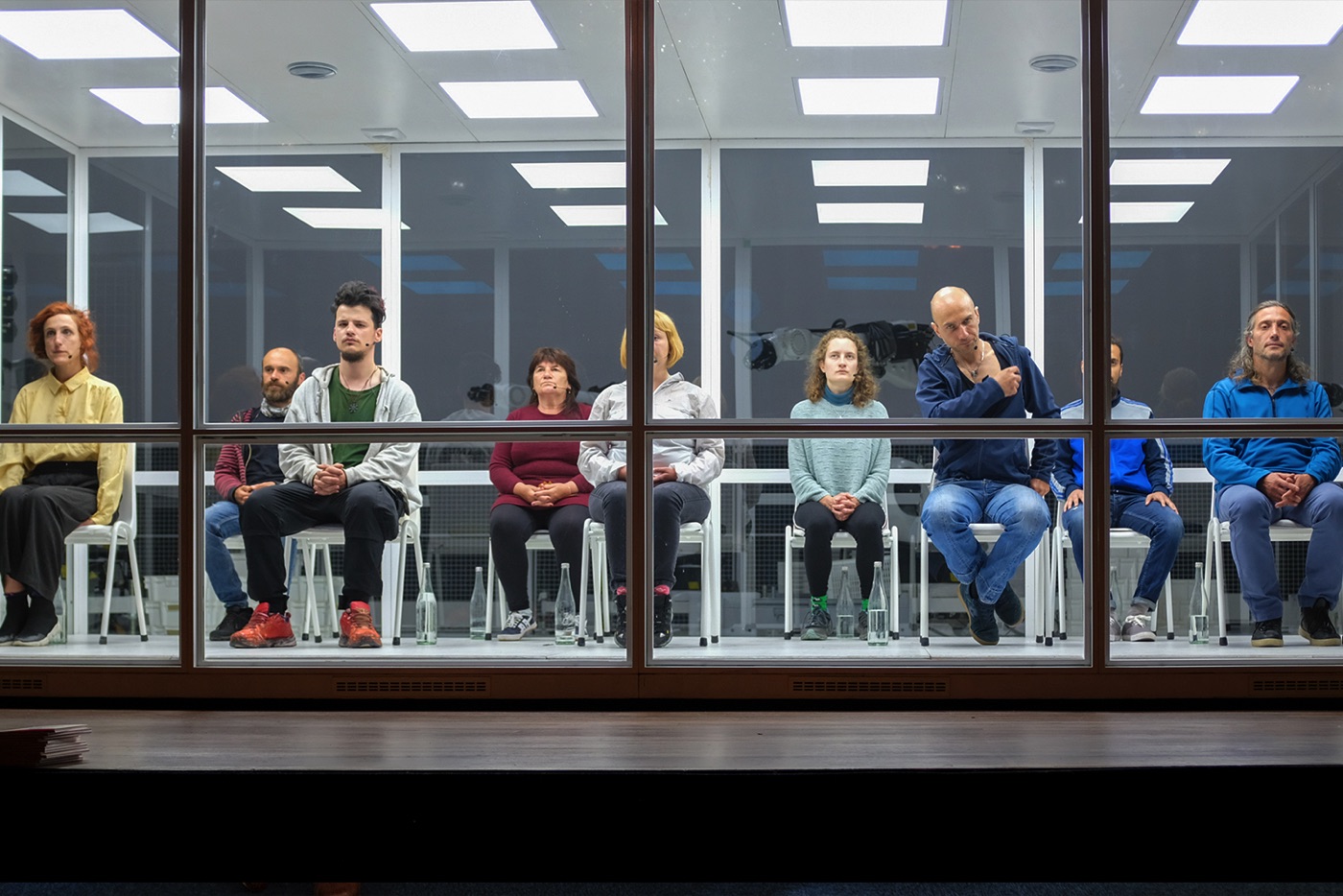 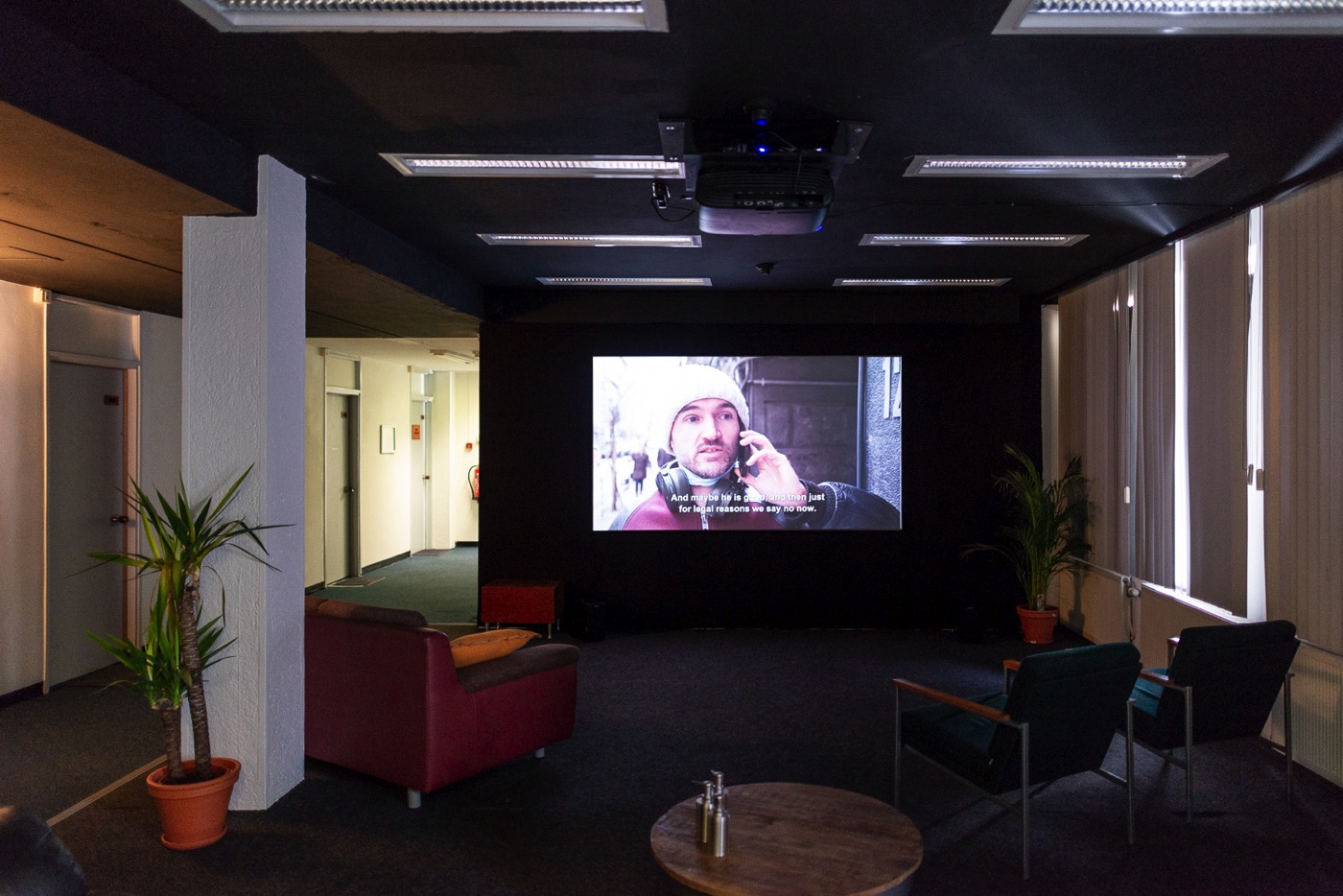 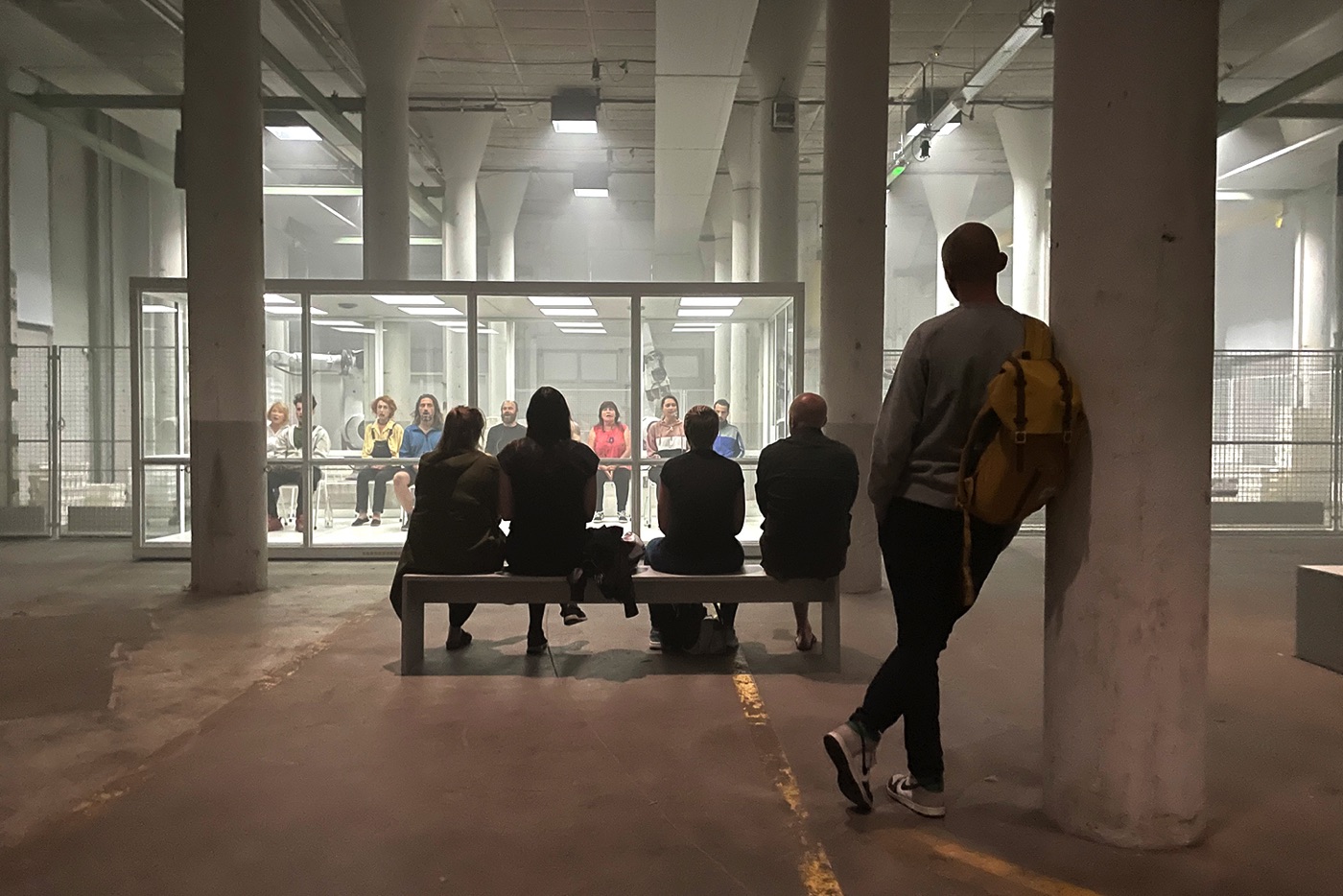 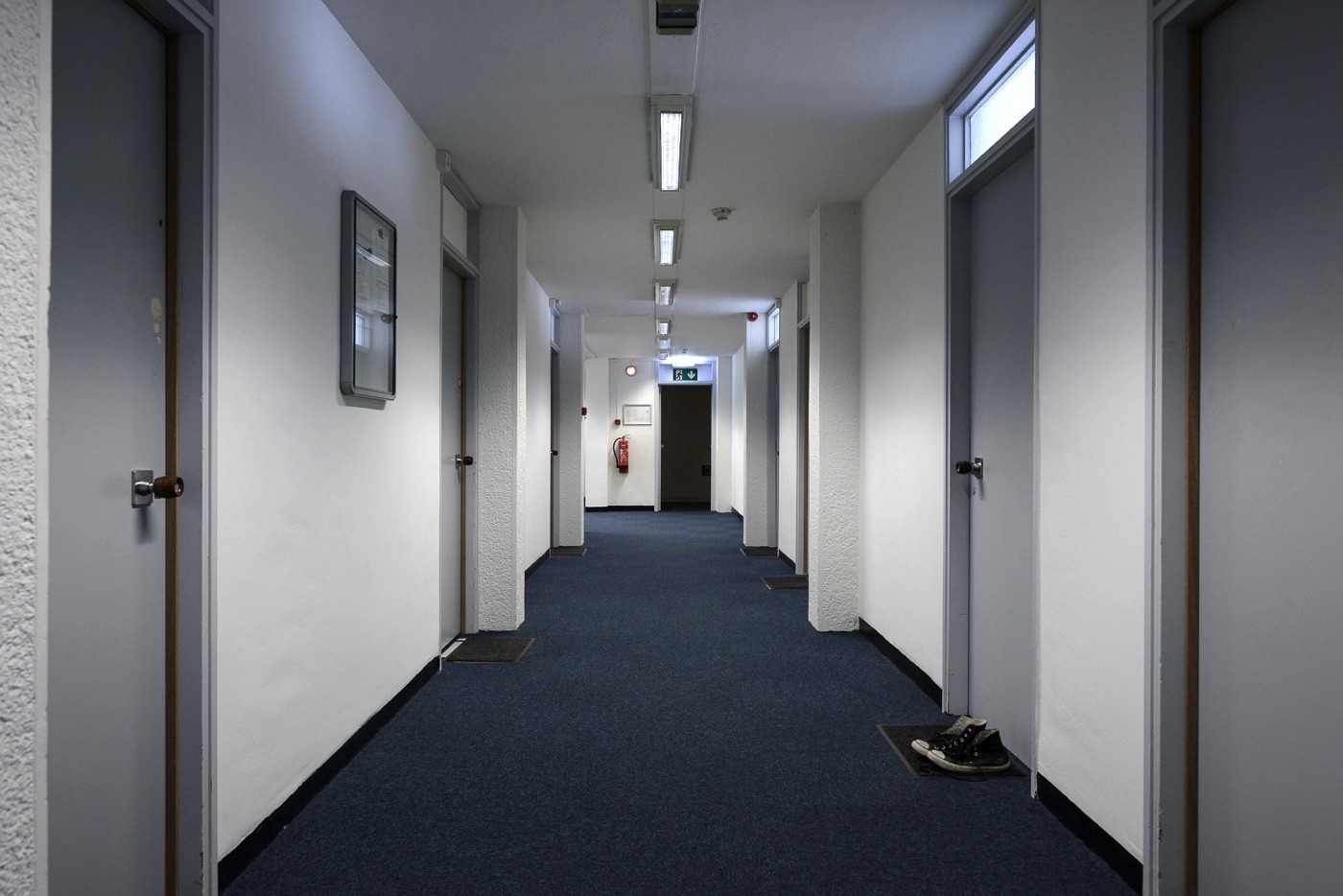 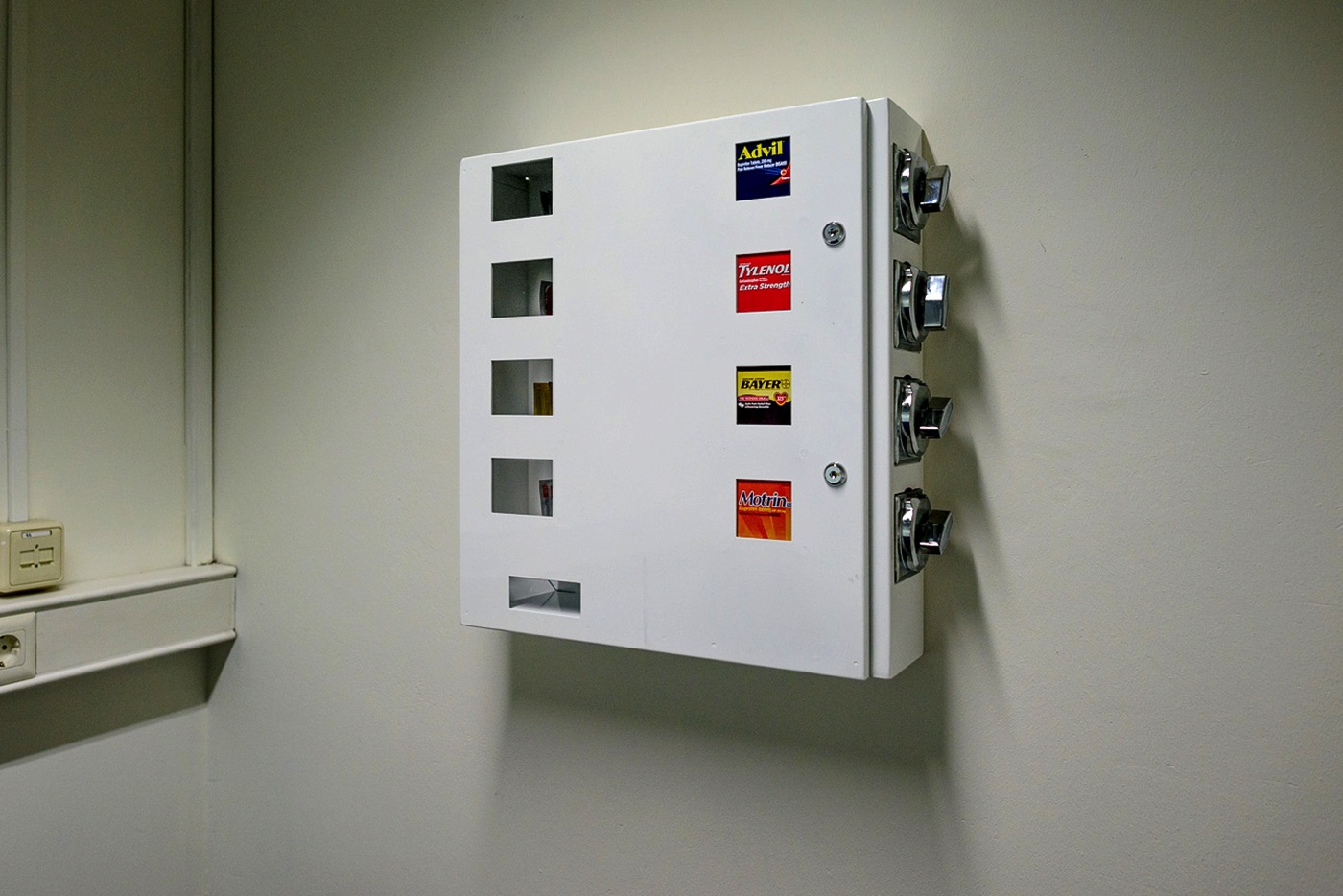 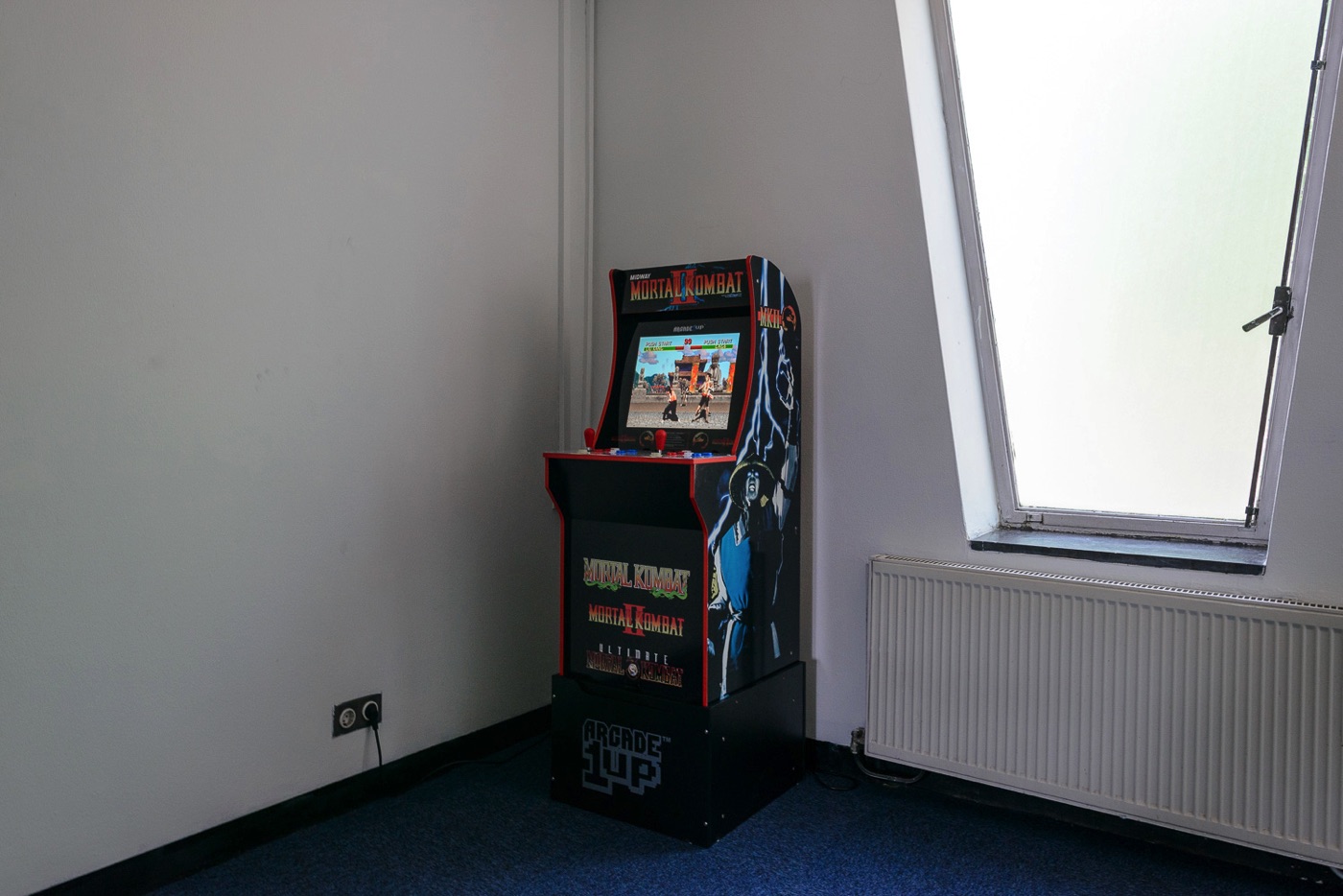 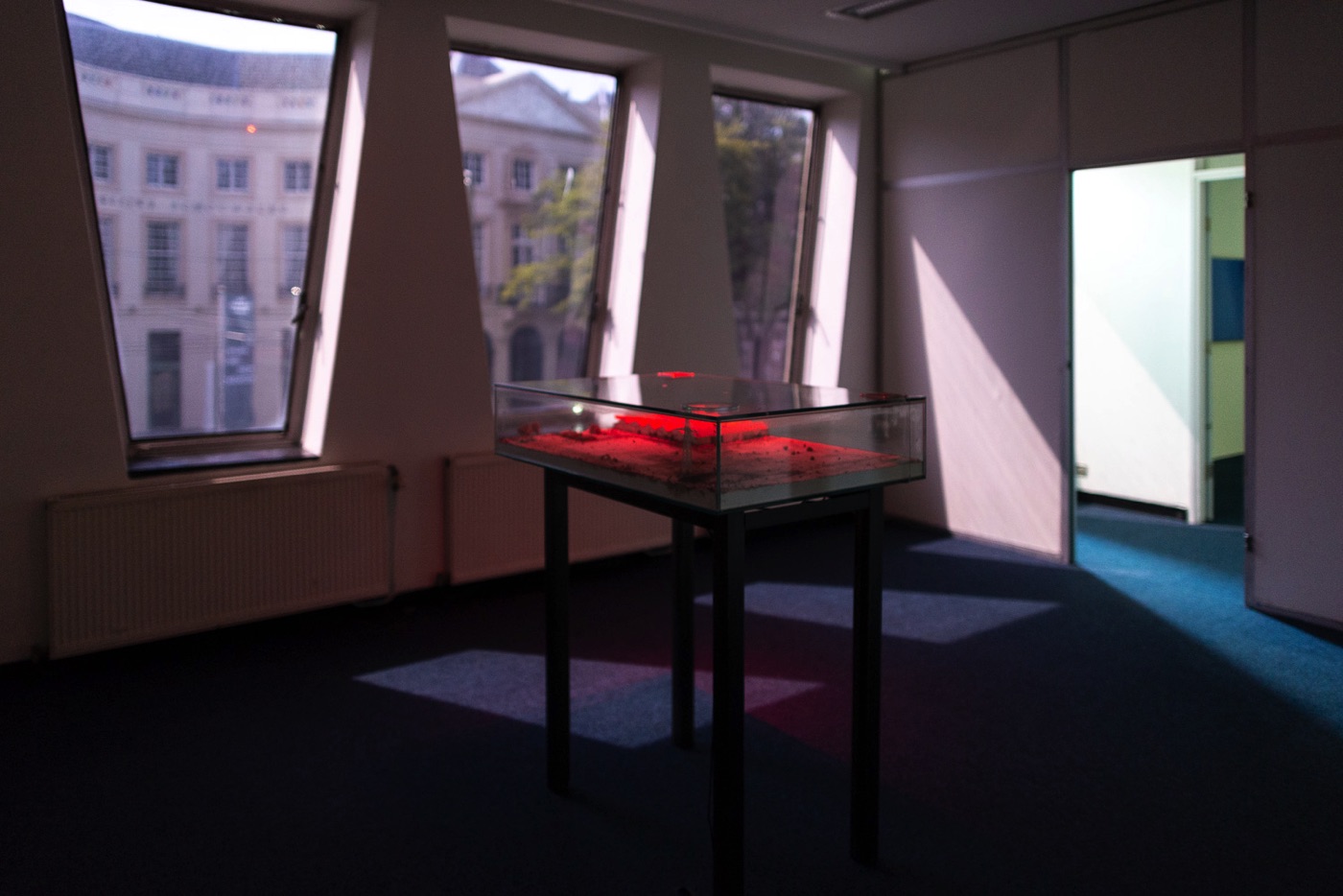 Photo’s: Willem Populier & Dana LaMonda
Around 8 o’clock in the evening I entered the Grote Zaal of the International Theatre Amsterdam, a theatre hall from 1894. For Dries Verhoeven’s ‘Brothers exalt thee to freedom’, ten Bulgarian performers sat in a glass box under white fluorescent lamps. They were hired through an employment agency according to Dutch theatre wages. They repeatedly sang the same socialist labour song. Behind them was a stage set of a distribution centre, with robot arms moving around packages, and someone in a white suit sporadically coming in to reorganise or pick them up. The theatre was filled with chairs, you could even sit on the balcony, yet it was fairly empty. This makes sense, since every performance lasted eight hours, and they have been going on since the afternoon. Visitors can freely walk in and out. How long would the average visitor stay? What do other people feel and think? Do they become self-aware in such an unconventional setting, although a classic theatre, where the theatre etiquette of plot and catharsis is challenged?

Catharsis can evidently be found, clinically as well as spiritually. The austere nature of the work is instigated by the industrial setup and the frescoes on the ceiling; the performers who from a heightened stage look into the eyes of visitors in their humble folding chairs; the idea behind the song as a glorification of labour and the soul with which it is symphoniously sung, albeit on autopilot. Some people start singing along, perhaps out of sympathy, or even from an ecclesiastical association.

The work ‘Brothers exalt thee to freedom’ was made up of two parts. The performance toured through several Dutch theatres (but for instance also at HEM, Zaandam). Furthermore, the performers lived in the spaces generally used by West as exhibition spaces. Their presence, front doors, and leftover rooms were part of the exhibition at West, as well as a documentary on Verhoeven’s project, a publication with biographies on the participants, video-work on the life of a migrant worker, and an ant farm. It should not be seen strictly as documentation material, however as an installation that permeates the subconscious: what ‘belongs’ to the exhibition, and what was already there in the former embassy building? What are the boundaries between art, work and life?

Dries Verhoeven is artist, scenographer, director, and theatre producer. Since 2020 he is a member of the Akademie van Kunsten. His work usually takes place on the borders between performance and installation art, and the viewer is often directly engaged with the work, or has the possibility to guide their own experience. For Verhoeven, critical reflection is an important element, rather than presenting clear positions. In this way, ‘Brothers’ sheds light on systems of labour and outsourcing by people in entirely different circumstances and realities, to which we obliviously, though inevitably, relate.

The project Dries Verhoeven: Broeders verheft u ter vrijheid (Brothers exalt thee to freedom) was presented at West Den Haag from 05.06.2021 till 15.08.2021.