Is the virus the message or are we? The answer is both. The virus is the powerful message from deep in the rich material workings of the planet, catching our immune systems unprepared. The world has long already changed, but we were in denial. All at once the new circumstances gracelessly assert themselves in our shops and stations. The regimentation seems so hasty and ill-considered, and it is, lines of tape on the floor at the shop, police cordons around playgrounds, but soon we won’t notice any more.

Our true condition is invisible to us, Marshall McLuhan said, it is too strange, too unfamiliar. Instead he claimed we go through life ‘in the rear-view mirror’ seeing the world not as it is, but through archetypes and metaphors from the past. It is only in these rare moments of extreme crisis when reality becomes perceptible for a split second. The moment we had the technical capacity to see the entirety of Earth from space, we immediately ‘covered’ it with ecology. Ecology is not a description of Nature as it is but only the Nature we know through technical means. Ecology is a language and human activity which stands in for any veritable knowledge of Nature. McLuhan calls this ‘coverage’, as in how the news ‘covers’ events, rather than conveying the events themselves, they provide coverage, clothing the event.


"now art crashes through,
the entire world perceived as junk heap
the junk world is the world of the artist
he sets about creating order out of junk
and garbage
garbage means clothing
the new clothing of the planet is garbage
it isn't only New York
but the entire planet is now like that
a garbage dump

everything on the planet has been scrapped
every institution


Previous to this present crisis, however, the rear-view mirror pathology was already in full effect. The impending rise of China and the decline of the European powers has sent populations clambering back in time to national identities which never were, and extremes of social conservatism we haven’t seen since the middle ages. Has so little changed? Our technology evolves far quicker than we do ourselves. The virus crisis reveals us unprepared on the edges of a technologically transformed condition we never more than barely understood.

It is understandable that people are alienated by this circumstance, especially when it has bearing on the existential conditions under which we are to reproduce our own lives, when the security we strive for through our work is constantly under threat from obscure combinations of forces at the four corners of the globe. The international condition of business capital has long obsolesced the national condition of politics. The early workers movements saw this, of course they were on the front lines mobilizing for international solidarity. This movement had to be crushed. The drama of national elections we go through has become a sports event, rather than something which determines our conditions. The real world is out there, but we neither have the institutions to get to know nor to address this circumstance. Take, for example the schism between global scientific consensus on the climate emergency and the lack of international political agency to do anything about it. Awash in information which doesn’t care about us, terrified we clamour for attention and community.


‘When you live out on the frontier, you have no identity. You are a nobody. Therefore, you get very tough. You have to prove that you are somebody. So you become very violent. Identity is always accompanied by violence. This seems paradoxical to you? Ordinary people find the need for violence as they lose their identities. It is only the threat to people’s identity that makes them violent.‘
No wonder people are craving identity. Identity builds community which can materially buffer against the global economic vicissitudes beyond our control. The frictions of community are at least real and addressable locally. Yet, our condition is not merely local, never really was nor will be again. But rather than prepare people to practically address this deficit, it seems there is more short-term advantage in keeping people apart. Maybe the international community of artists and arts institutions can help here. The artists of net.art are shaking their heads in recognition of today’s situation which redeems their intuitive and mostly disregarded provocations of the dawn of the Internet age. Suddenly today, just at the moment we the technology is so pervasive that we hardly need notice that we haven’t left the house for days, we are confined by law to our homes.

Did globalization fuck up so many people's identity that they have to rely on discrimination and hatred to defend their sheer sense of belonging?


The virus not only lays bare our circumstances, it also lays us bare. We find that in the interest of public health we must give up a certain access to our internal life. And our bodies are the battleground for economic dominion. In recompense, perhaps in deference to the aghast expressions on our faces, we get to wear masks everywhere. The masks are hated because they represent a loss of identity, a submission to the mass out of the noble society of individuals, which after all was only ever about being able to afford not to depend on anyone for your survival, and only on your wealth.

In deference to the mask, the authorities ask for access to more, more intimate data as a matter of organizing life in general. When will the schools and theaters open again? When everybody can be regularly tested and their contacts tracked. A certain submission to the atrikocratic (medical rule of law) regime requires us to surrender certain antiquated expectations of privacy, so dear and cherished because they have already been surpassed by our technological situation. Who gets to be private anyway, about what?


McLuhan: ‘we now have the means to keep everybody under surveillance. No matter what part of the world they are in, we can put them under surveillance. This has become one of the main occupations of mankind, just watching other people and keeping a record of their goings on.’
McManus: ‘And invading privacy?’
McLuhan: ‘Yes, in fact, just ignoring it. Everybody has become porous. The light and the message go right through us.’

In his typically fine feeling for the chinks in our armour, of understanding exactly where people are most insecure and tickling them there, McLuhan makes the ‘outrageous hypothesis’ In a special edition of his experimental DEW Line newsletter ‘Communism Hard and Soft’. On page 6, he declares that the US is the most communist country on earth, and that the ferocious anti-communism is a vain reactionary instinct to reconfirm a condition of privacy and private property, the basis of which has been held together with the chewing gum and and bandaids of deregulated finance for the last 40 years. The US is so anti-communist because it cannot accept that the irrevocable transformation of the entire basis of their way of life had already begun, and the virus is a progress report. 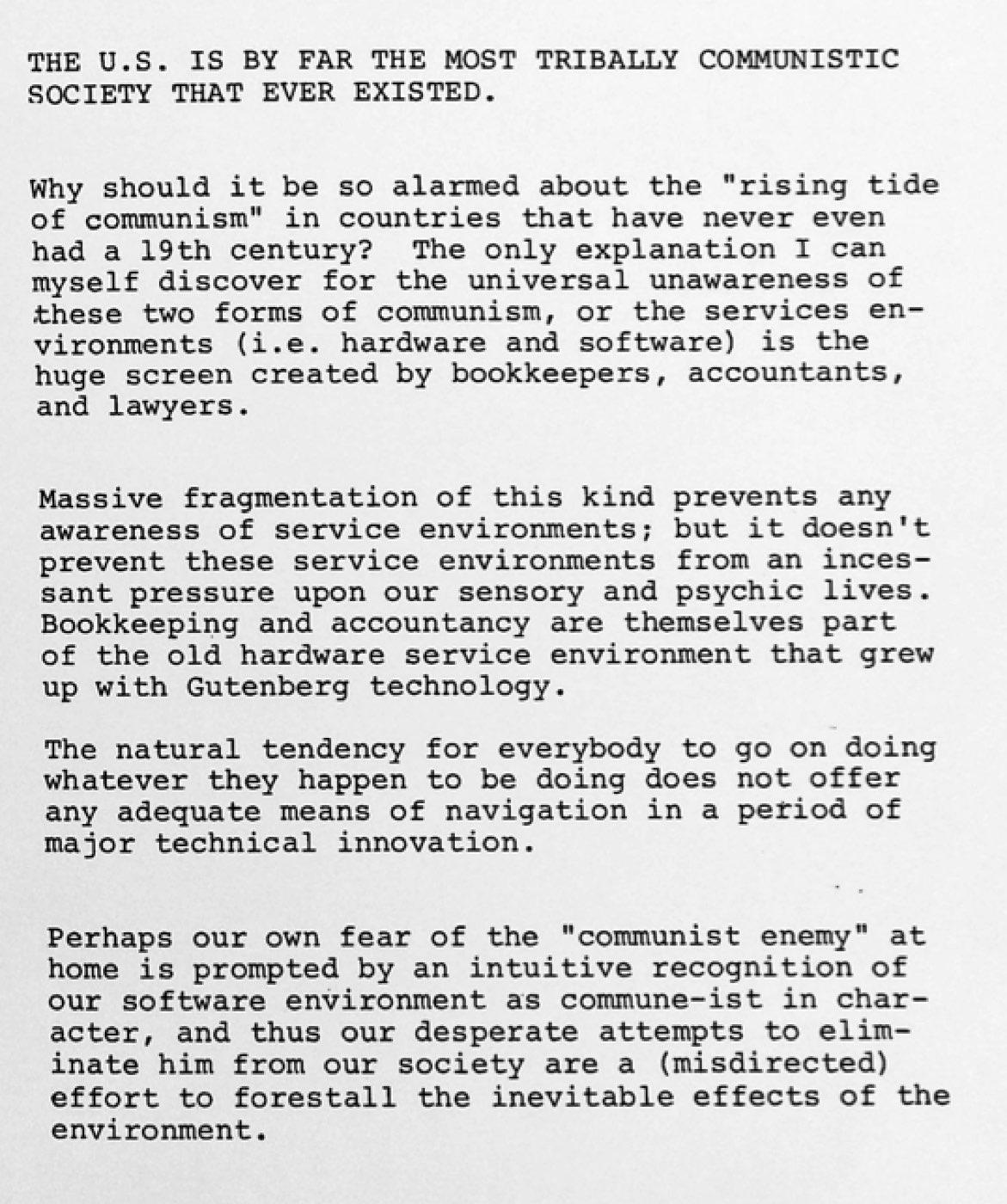 ‘Competition is ruination’, W. Edwards Deming, architect of Japan’s Industrial miracle, was fond of saying. We need everyone to buy into a common project which benefits everyone. But we are taught not to work together and that competition is the only way to greatness. One great competitor means a legion of losers, is that good for the winner or the losers? Why not rise together?. We need to be able to trust the process, we need to trust the results, and we are not seeing results in our lives. Vainly we scan our screens for indications that things are getting better, not trusting our instincts. But the screens are, as Vilém Flusser warned, not windows on reality but interfaces already programmed with particular permutations. Increasingly we see the world through a dashboard of vital indications, like a doctor monitoring a patient’s vital signs, the stock ticker and graphs on the news, maps of corona infections, all promising to provide some confirmation, we are on the right track. Confirmation bias: at best it is what McLuhan calls cool media, poor quality information which involves us in filling in the blanks, at the same time it is what he calls ‘garbage’, the coverage of reality which covers over what it is meant to represent.

The news is olds, cool media capturing our imagination. The days when a rising stock market index meant better conditions for everyone is long gone. Today, stock prices and indexes are of interest to a tiny few, yet the iconic power of the upward graph still enthrals. Today we pray the market goes up so that, by some obscure mechanism, some benefit will filter down to our lives. At the same time, the sudden halt to business ‘as usual’, the evaporation of traffic jams, the disappearance of the tourists, the transformation of what many called work, reveal the world can be so completely different in a matter of a few days. The virus is a glitch in the deep interplay of humanity and planet, in the Operating System called modernity, giving us an unexpected opportunity. What shall we make of it? Here McLuhan advises us again to attend to the activities of the artists, the special sensitive ones who are always avidly gesticulating for us to attend to imminent social transformation, which occur, like the pandemic, beyond power and will.


‘The artist would seem to have been given us as a providential means of bridging the gap between evolution and technology. The artist is able to program, or reprogram, the sensory life in a manner which gives us a navigational chart to get out of the maelstrom created by our own ingenuity.’ (Man and Media, 1979)
The virus reveals to us, despite our pretences of individuality, that human beings are an undifferentiated medium for its communication and replication. In the electronic age, we are in a world of field relations where understanding comes from involvement not abstraction. The hoarding of flour and toilet paper only indicates our unwillingness to turn to each other for help. Indeed, having to rely on your neighbour is not just a sign of weakness, of poverty, under Covid-19 this poverty is a vulnerability for infection. Being toilet-paper-autonomous, is the next best thing to having a castle in the countryside where you can hole up until a vaccine is available. Life itself becomes luxury. We are the medium for the virus, and its message.


Baruch Gottlieb is trained as a filmmaker at Concordia University Montreal, and has a doctorate in digital aesthetics from the University of Arts Berlin. From 2005-2008 he was professor of Media Art at Yonsei University Graduate School for Communication and Arts in Seoul, Korea. He is active member of the Telekommunisten, Arts & Economic Group and laboratoire de déberlinisation artist collectives. Author of ‘Gratitude for Technology’ (Atropos Press, 2009), ‘A Political Economy of the Smallest Things’ (Atropos Press, 2016), and Digital Materialism (Emerald Group Publishing, 2018) he currently lectures in philosophy of digital art at the University of Arts Berlin and in cybernetic aesthetics at the TU Cottbus.