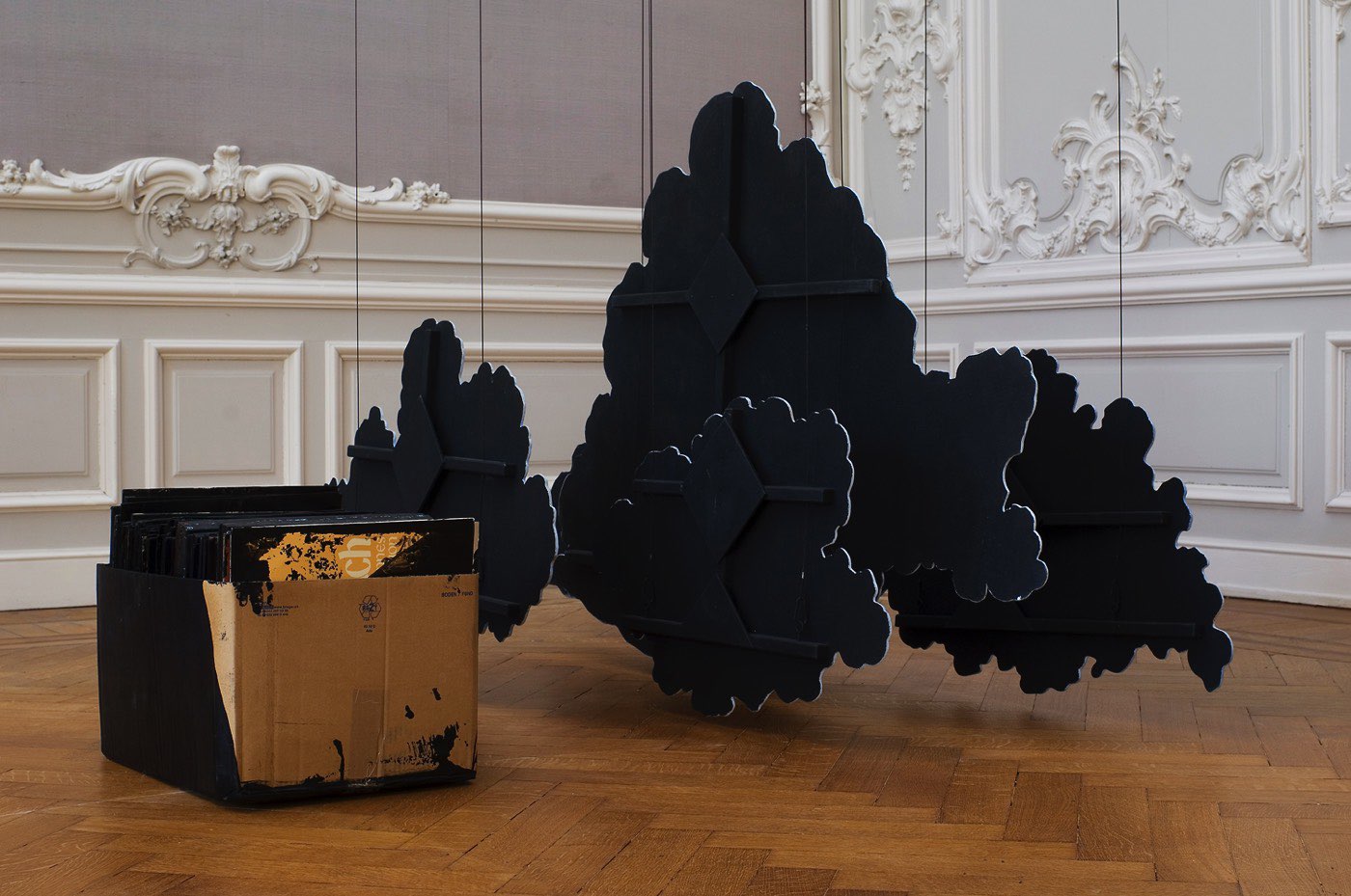 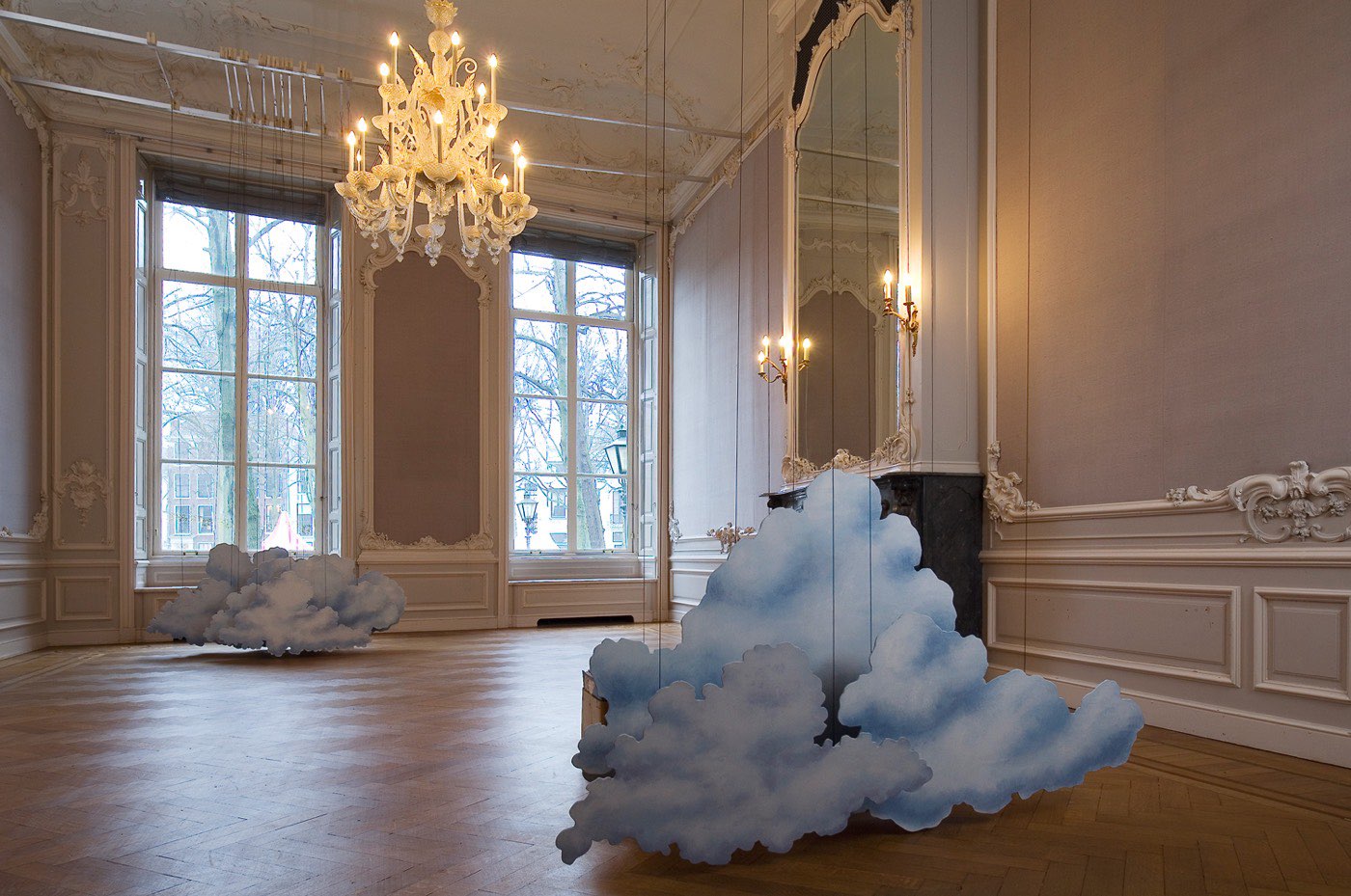 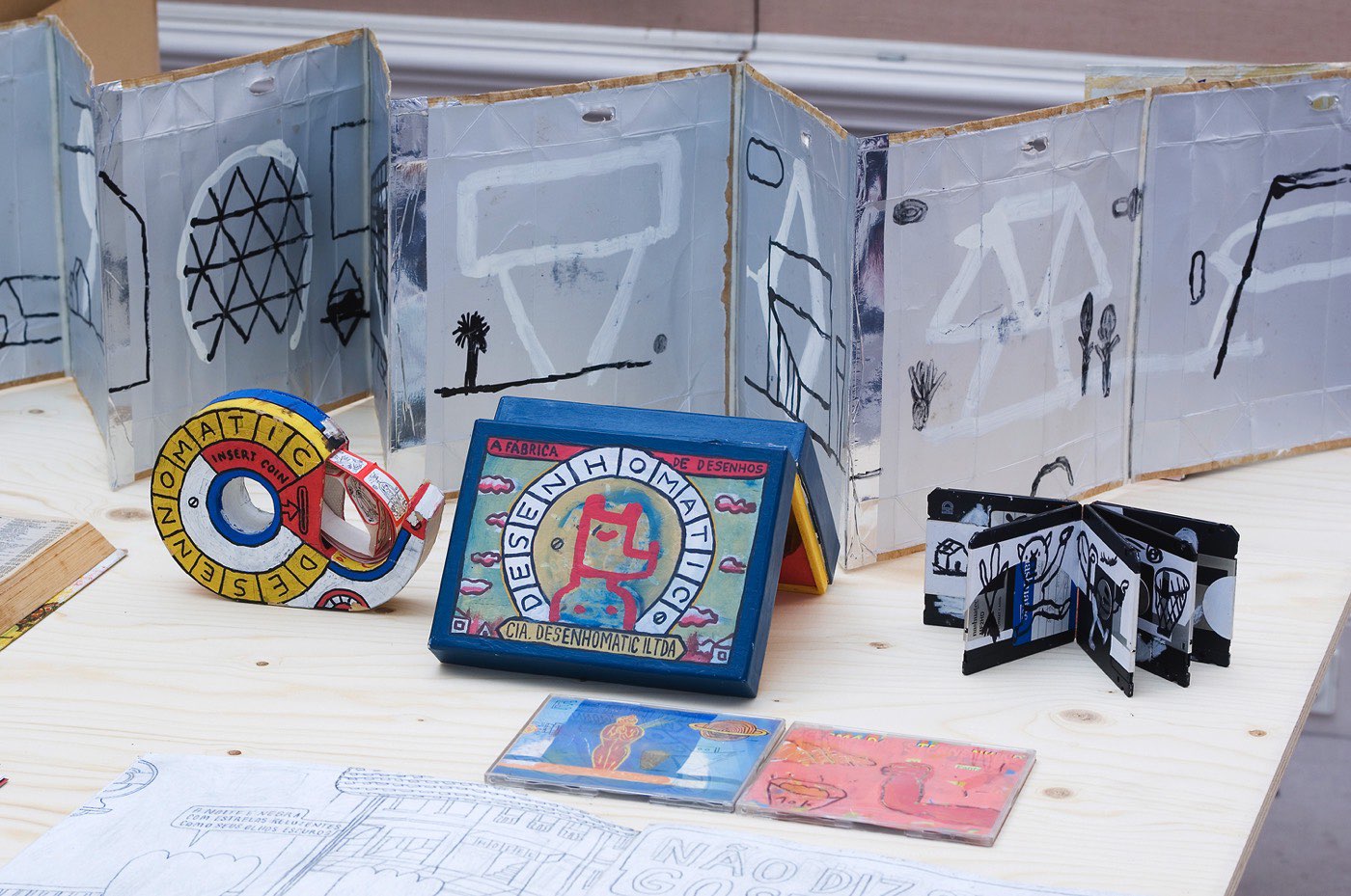 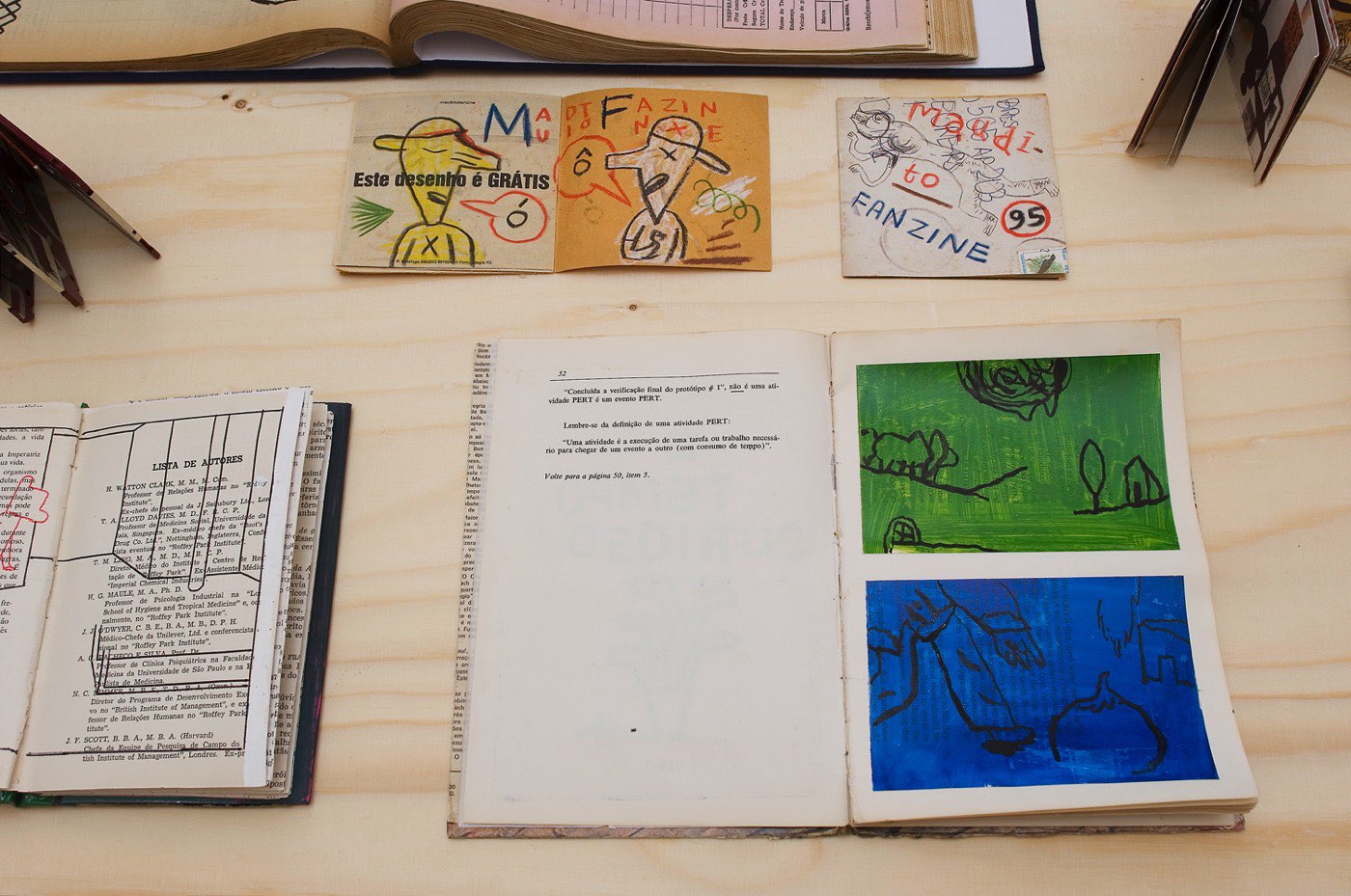 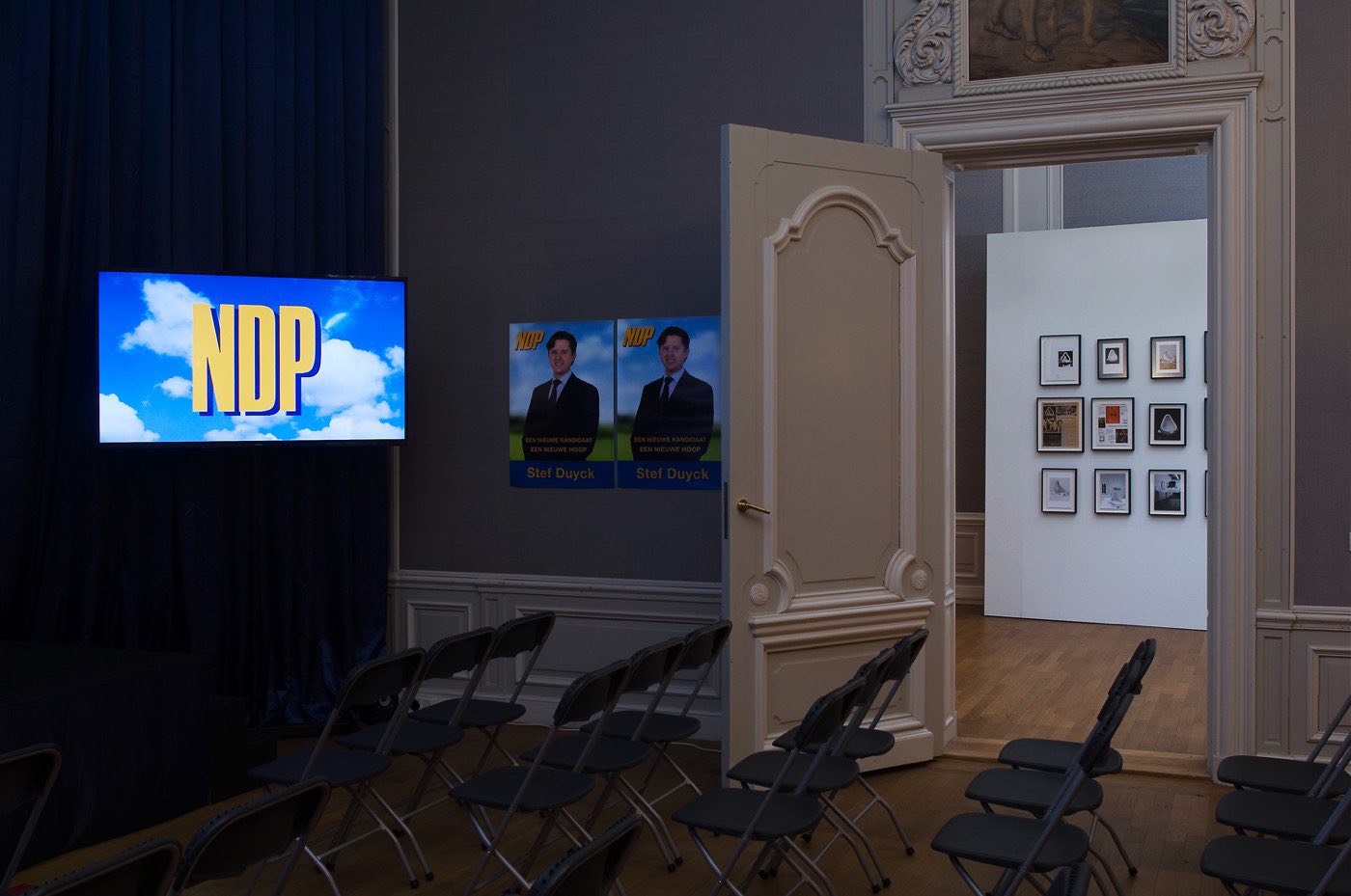 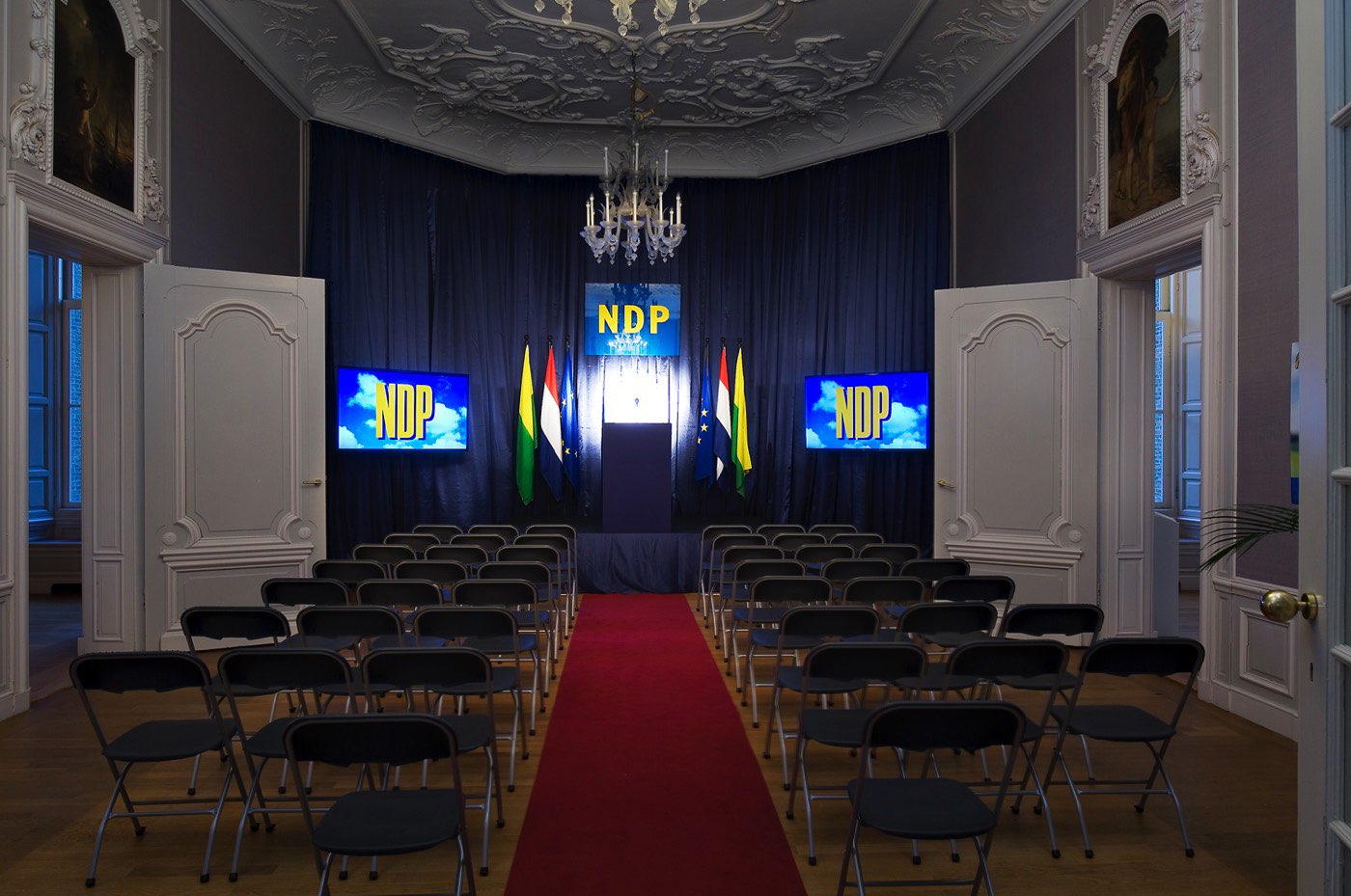 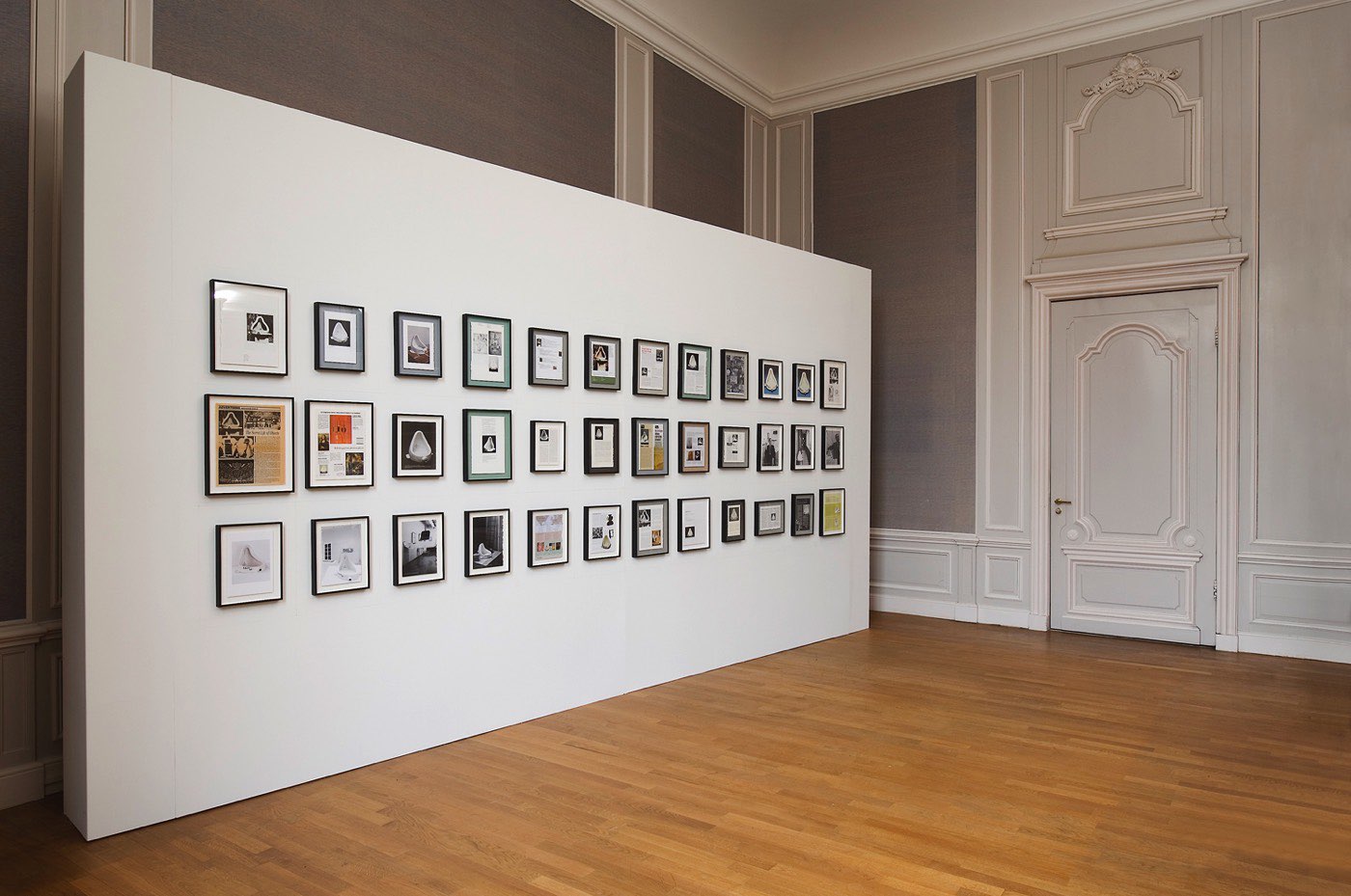 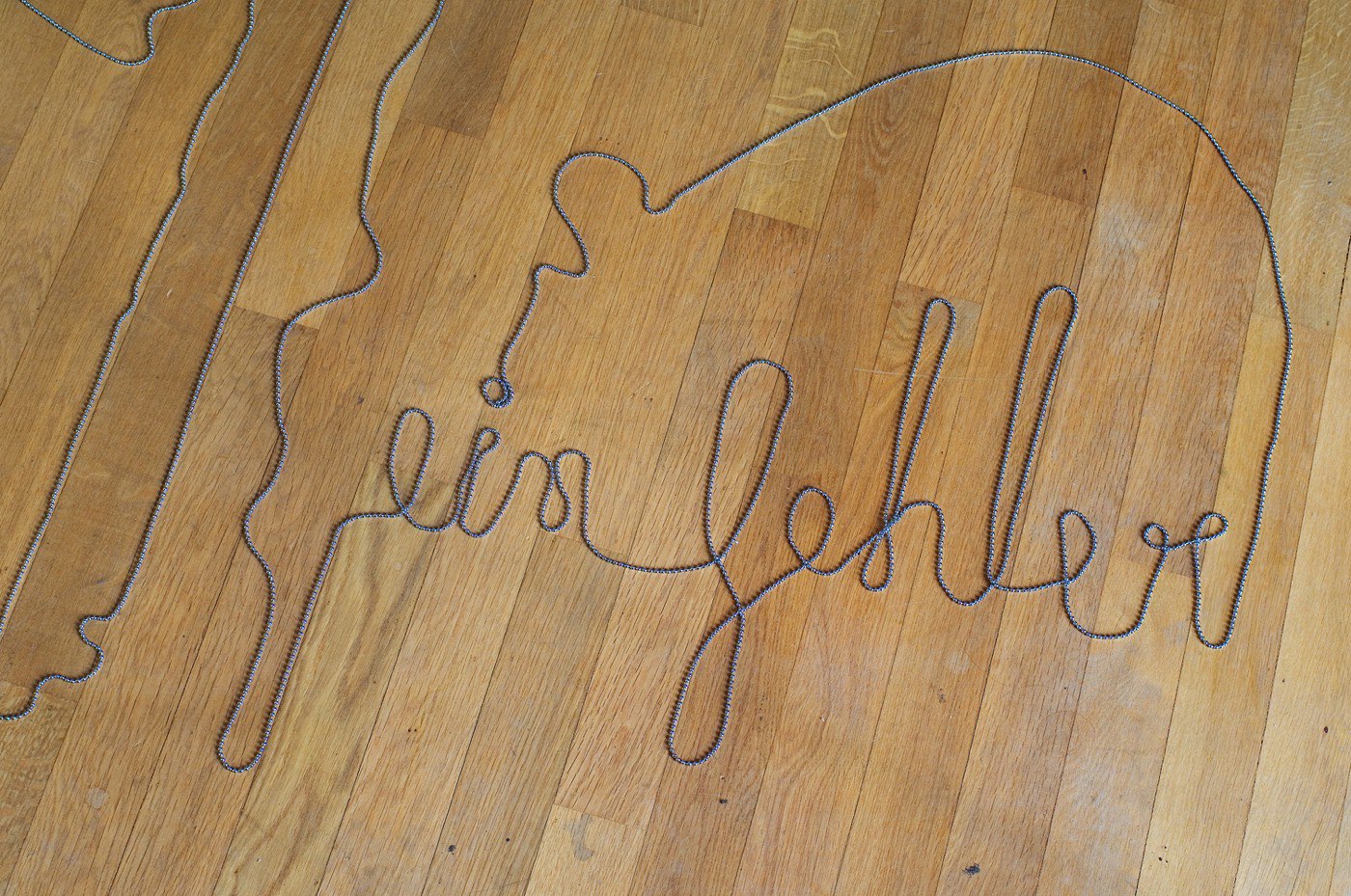 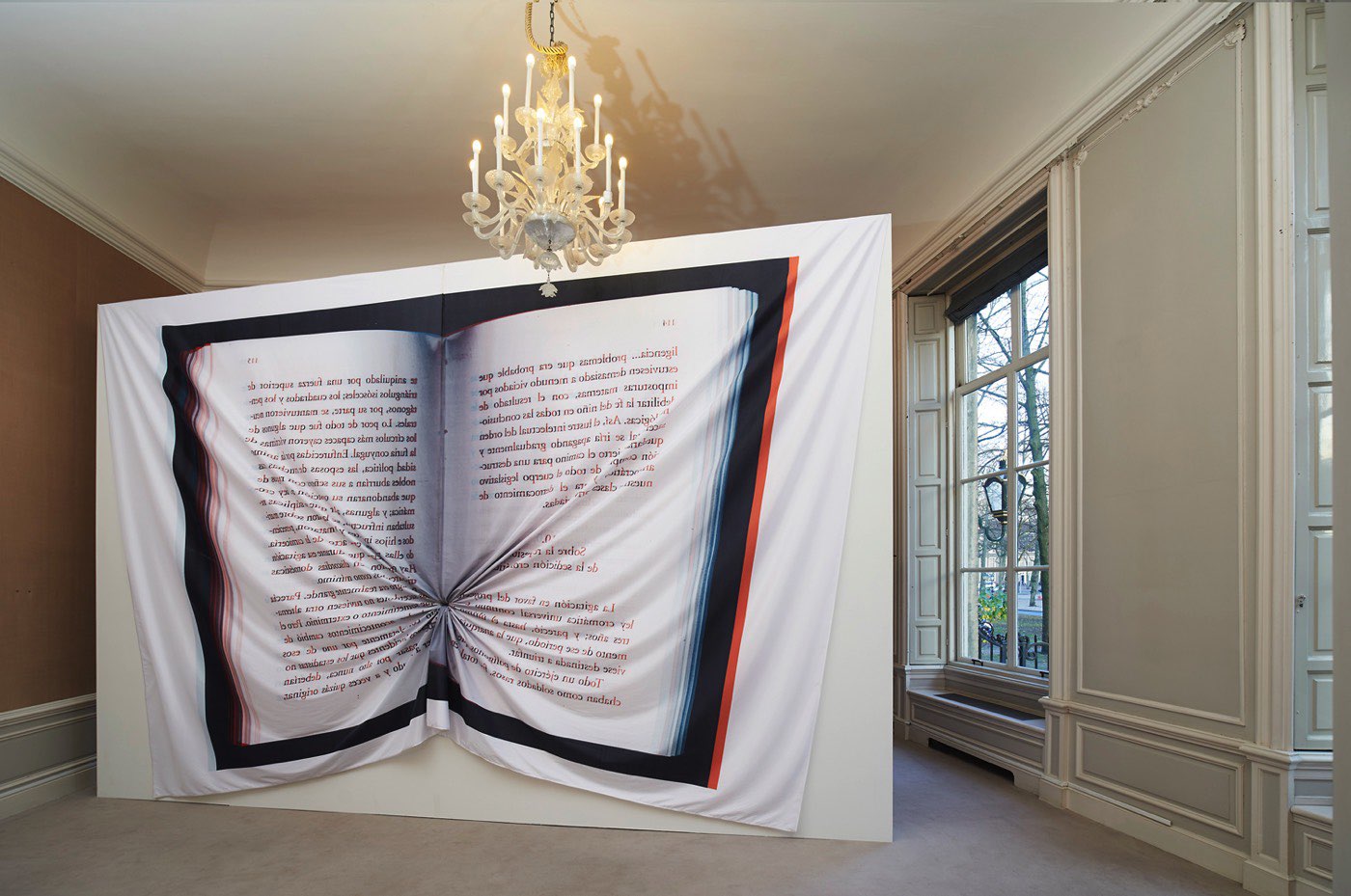 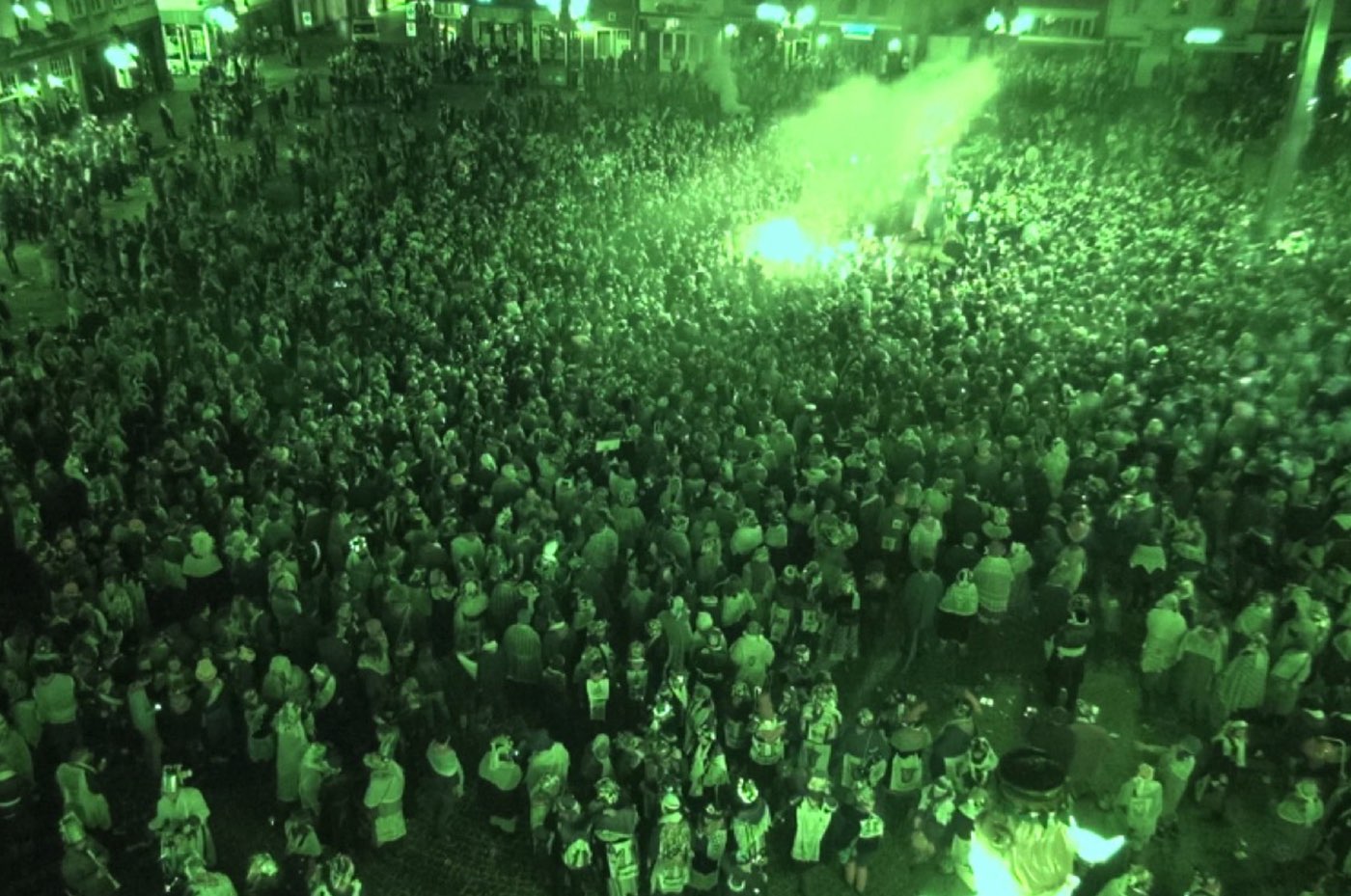 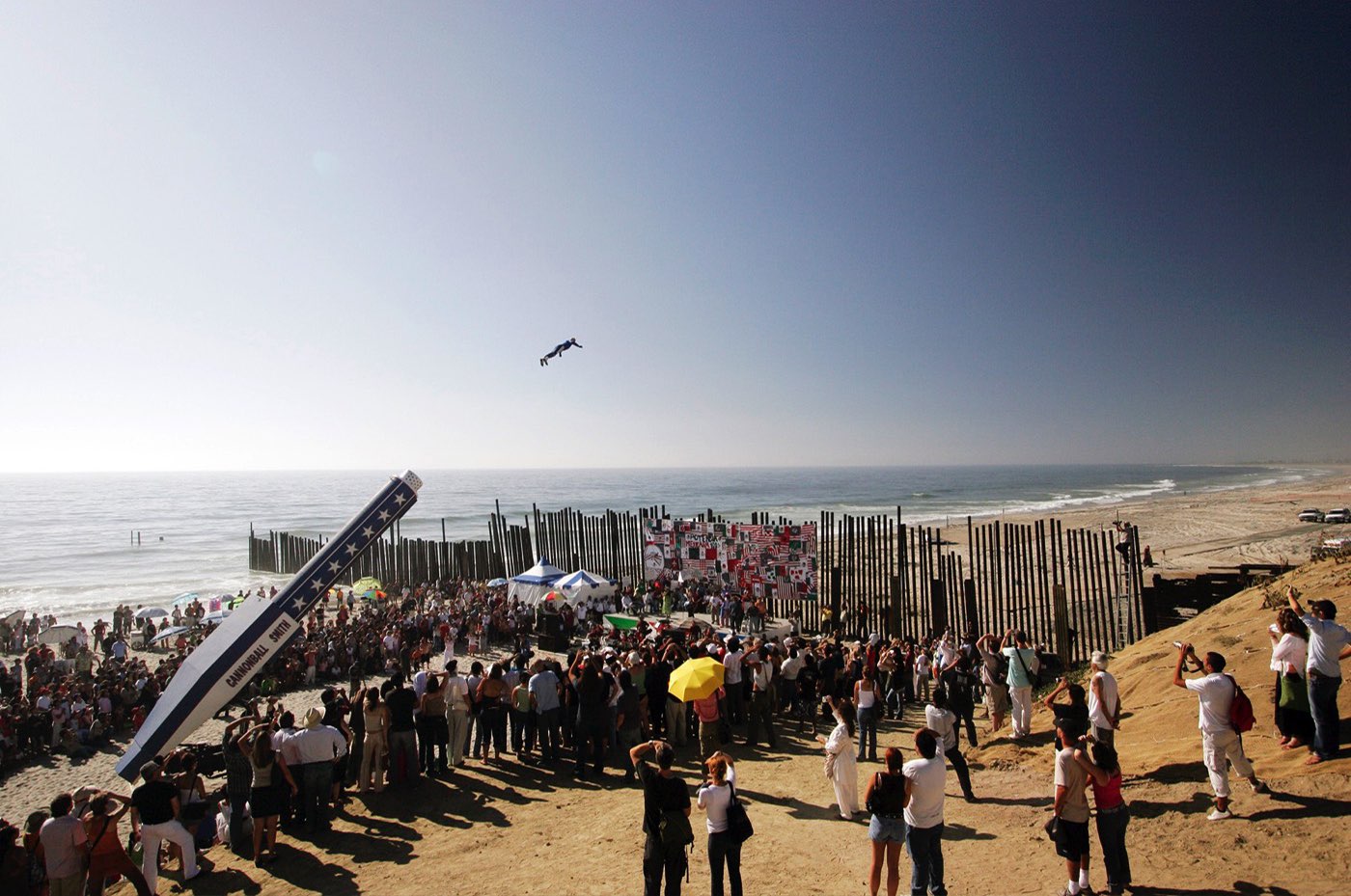 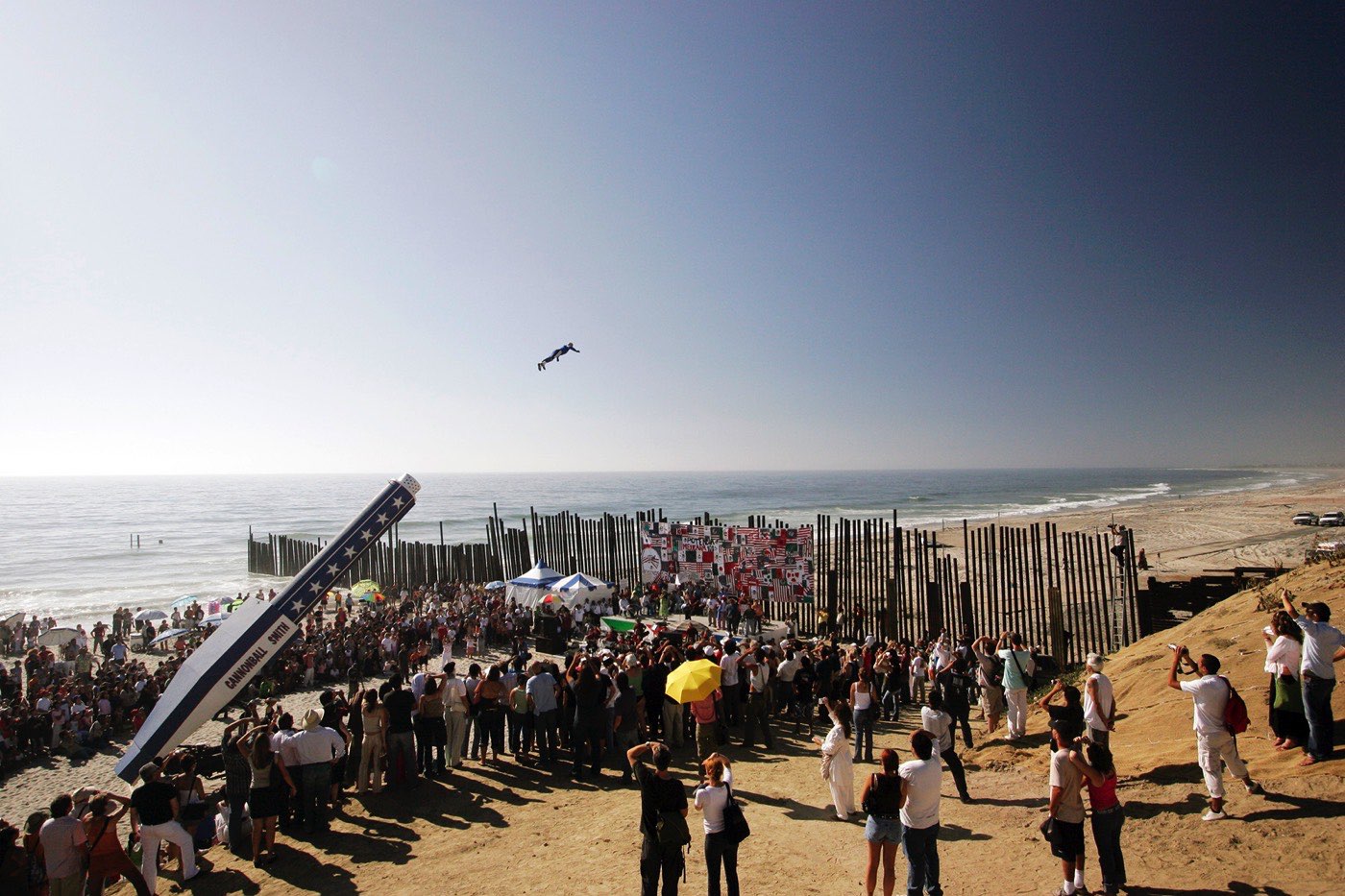 The 2016 exhibition ‘See how the land lays’ can be described along parallel lines: as futuristic, dystopian, or even not belonging to this world at all, while at the same time presenting works that are as much material as the world around us and featuring what makes up reality today. The two-part show consists of past publications of the magazine ‘Gagarin, the artists in their own words’ and works from selected artists who have appeared in Gagarin. The magazine, founded by Wilfried Huet, was based upon the principle that art should be let loose, without too much noise around it. That artists can show their work ‘in their own words’ on a platform that is not ‘about’ art, rather it represents it. Such a method is inherently a critique to the academic approach to art and art critics, which might take up the bulk of space in the art world nowadays and outnumber the actual art that gets displayed — a counterintuitive development.

Yuri Gagarin was the first man in outer space and the first to experience the globe from the vast and infinite space outside it; a perspective not imaginable to many. The concept of this ‘vue plongeante’ entails to a larger extent a new perspective on life and life on earth. Perhaps we’re better off without it, seeing as one can wonder in how far humanity has benefited off existential crises, often resulting in a kind of nihilism and fatalism. But at the same time the strange curious pull towards space, and striving to achieve this bird’s/God’s eye view is of all times and cultures, and arguably the result of art, philosophy and religion. We’re drawn towards our own futility: an experience of humility which would (ideally) put everything we try to understand in its place and hopefully would calm us down knowing we’re part of a bigger whole or plan.

So apparently we gain worldly significance out of imagined, out-of-space, perspectives. The artworks in this exhibition try to integrate this premise. At first, the curation of the works seems to be more about the works standing on their own and fending for themselves, with little connections relating one to the other. Yet when understood from the shared premise, it can be seen how every artist, whether consciously or not, has taken a familiar phenomenon in order to subsequently put it out of its context and offer a vue plongeante. Among others, Latifa Echakhch (Encrage (L'appareil photo Kodak), 2014) has taken on clouds to challenge the assumptions and connections we make between objects. It shows a group of wooden clouds that hover just above the ground, their backside painted with Chinese black ink and objects placed behind them, such as books, that imposes one to relativise the front and back perspective. Gauillaume Bijl (Nieuwe Demokratische Partij/A New Democratic Party, 2016) has opted to recreate the setting of a political campaign, where a space is organised as if a speech could be held at any time, with a plinth on a stage adorned with flags, posters of the imaginary party all around, and a number of folding chairs neatly lined up for attendees. Diego Tonus (Processing Authorities — Study for the Esperanto Gavel, 2015) took something like the auction hammer as an object of interest, in a video-montage where numerous different hammers are slammed on a block of wood and one could only wonder for which purpose each hammer used to serve, what decisions were made with it and which consequences it brought about. Being able to zoom in on the significance of each single hammer, as well as the paced whole, is again a kind of ‘Gagarian’ practice.

The viewer realises their God’s viewpoint, and might even be struck with a deja vu. The exhibition emphasises what we all strive to do, whether in past times it used to be ‘trying to reach God’ and now is more alike ‘trying to be God’. An imitation of life.