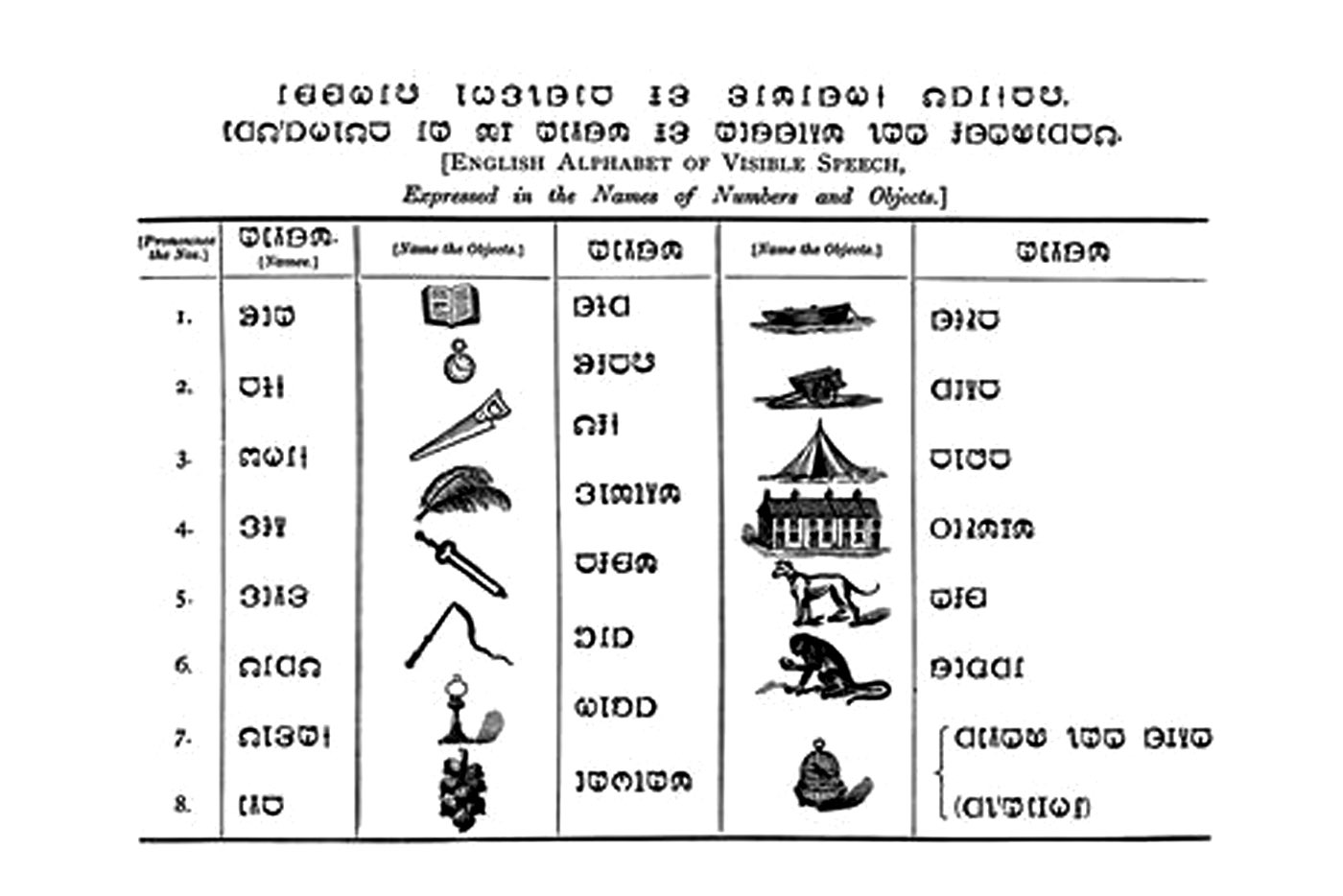 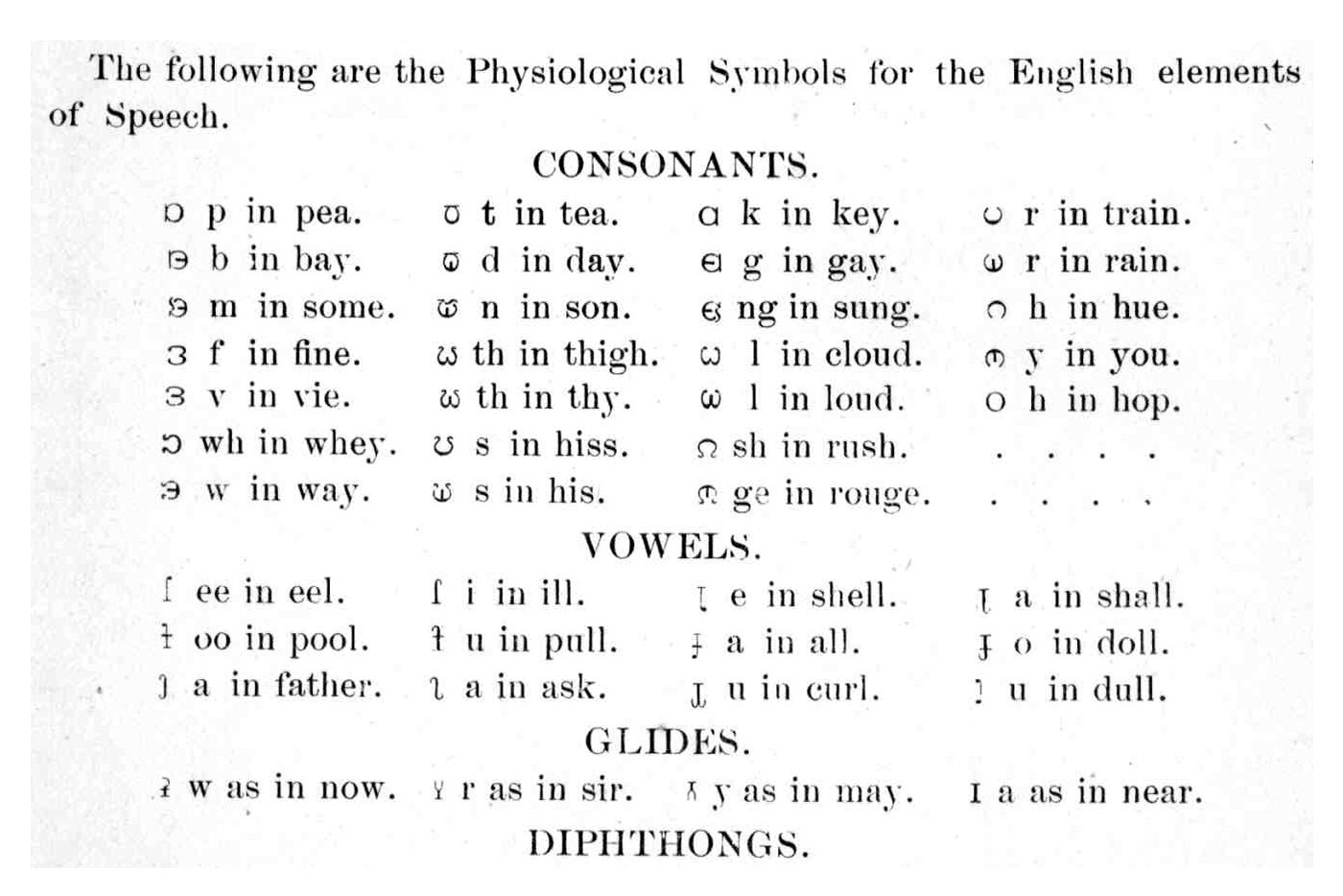 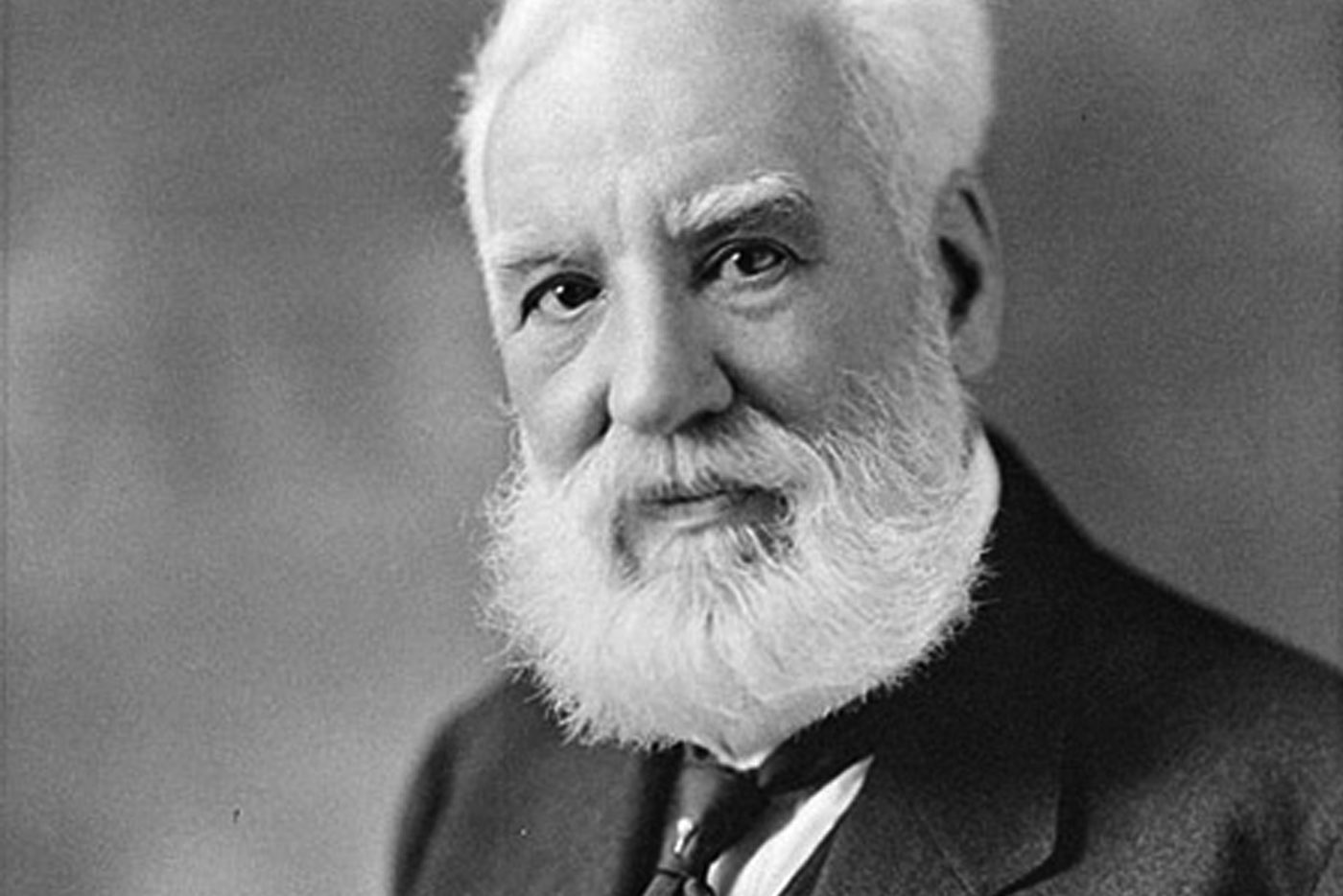 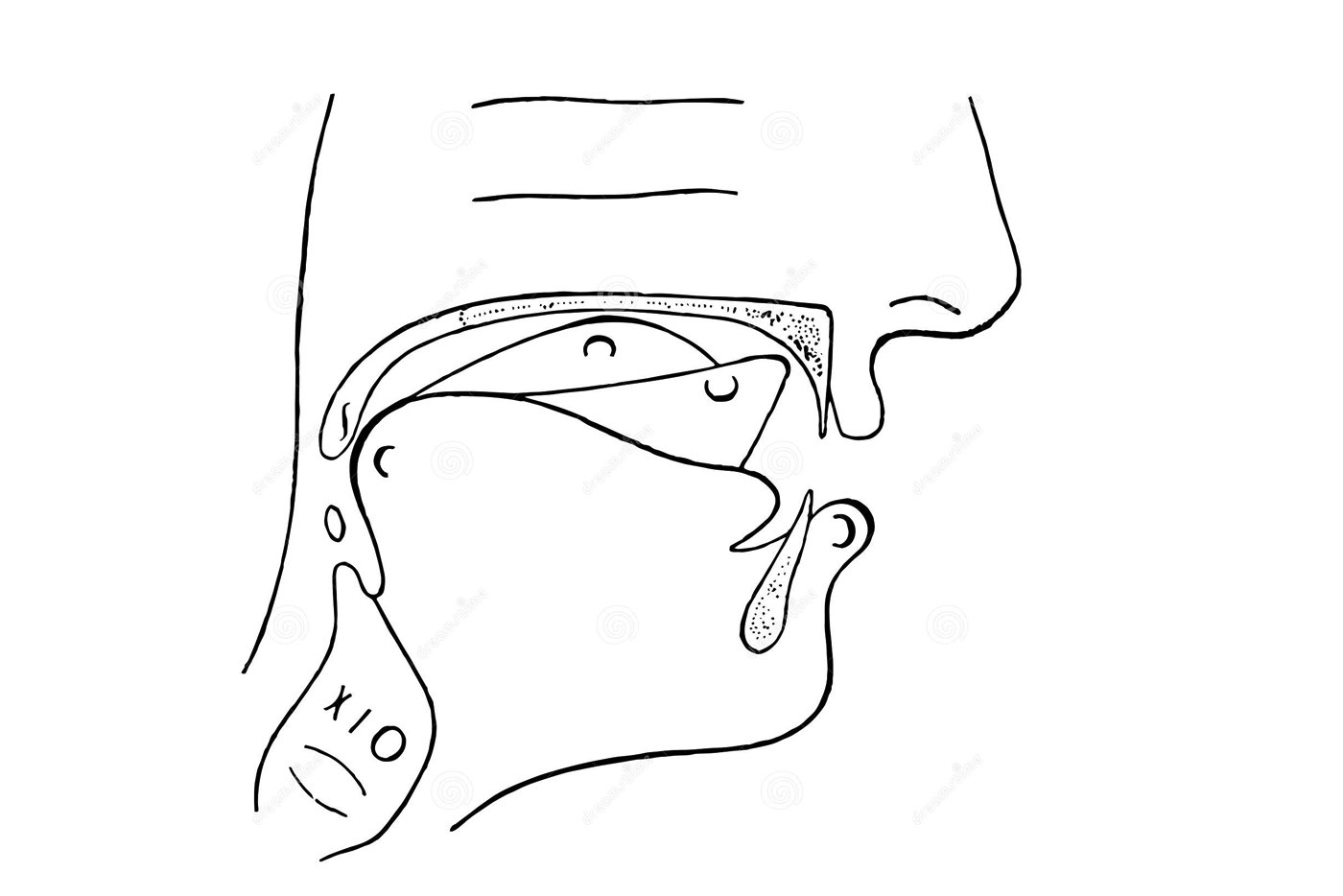 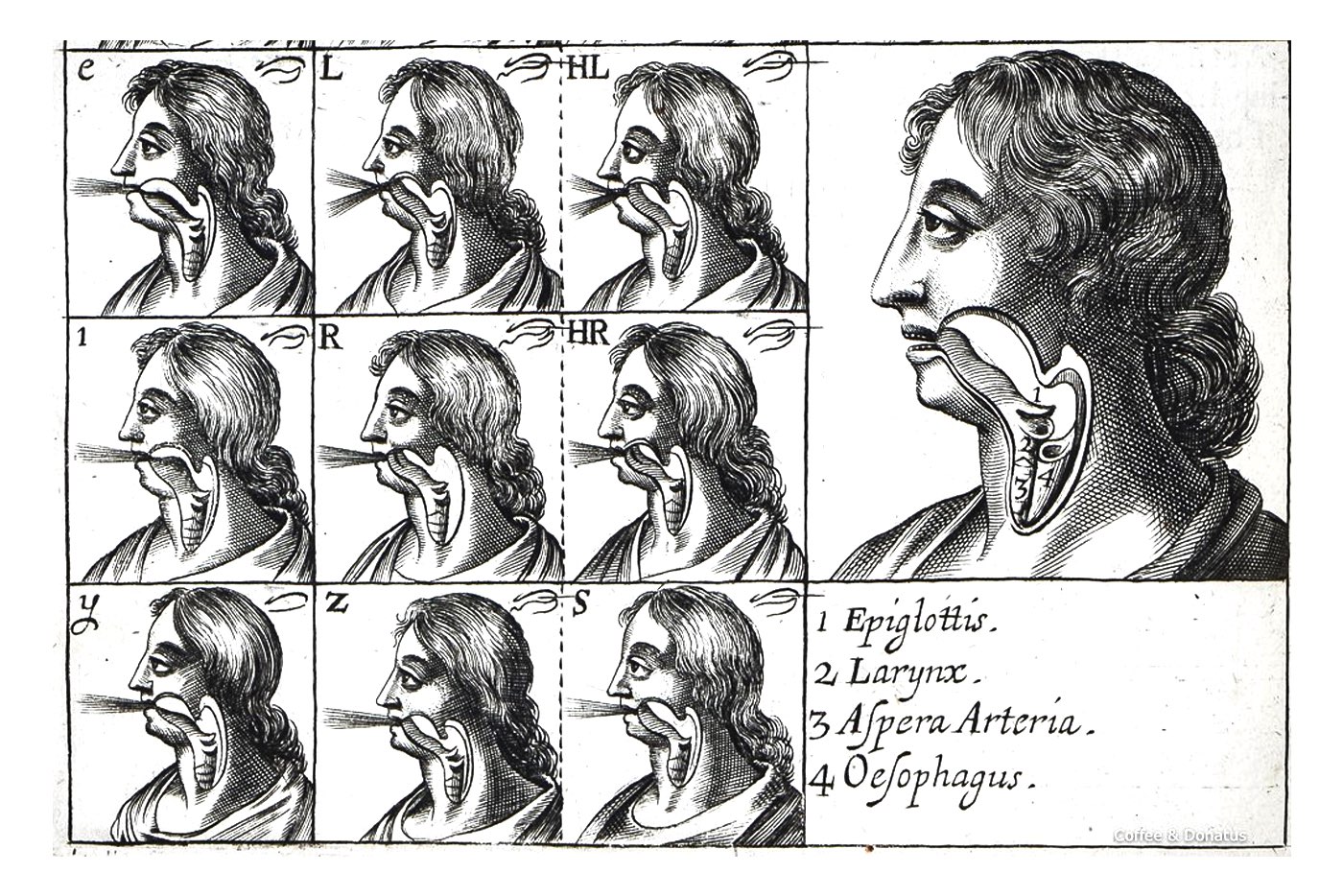 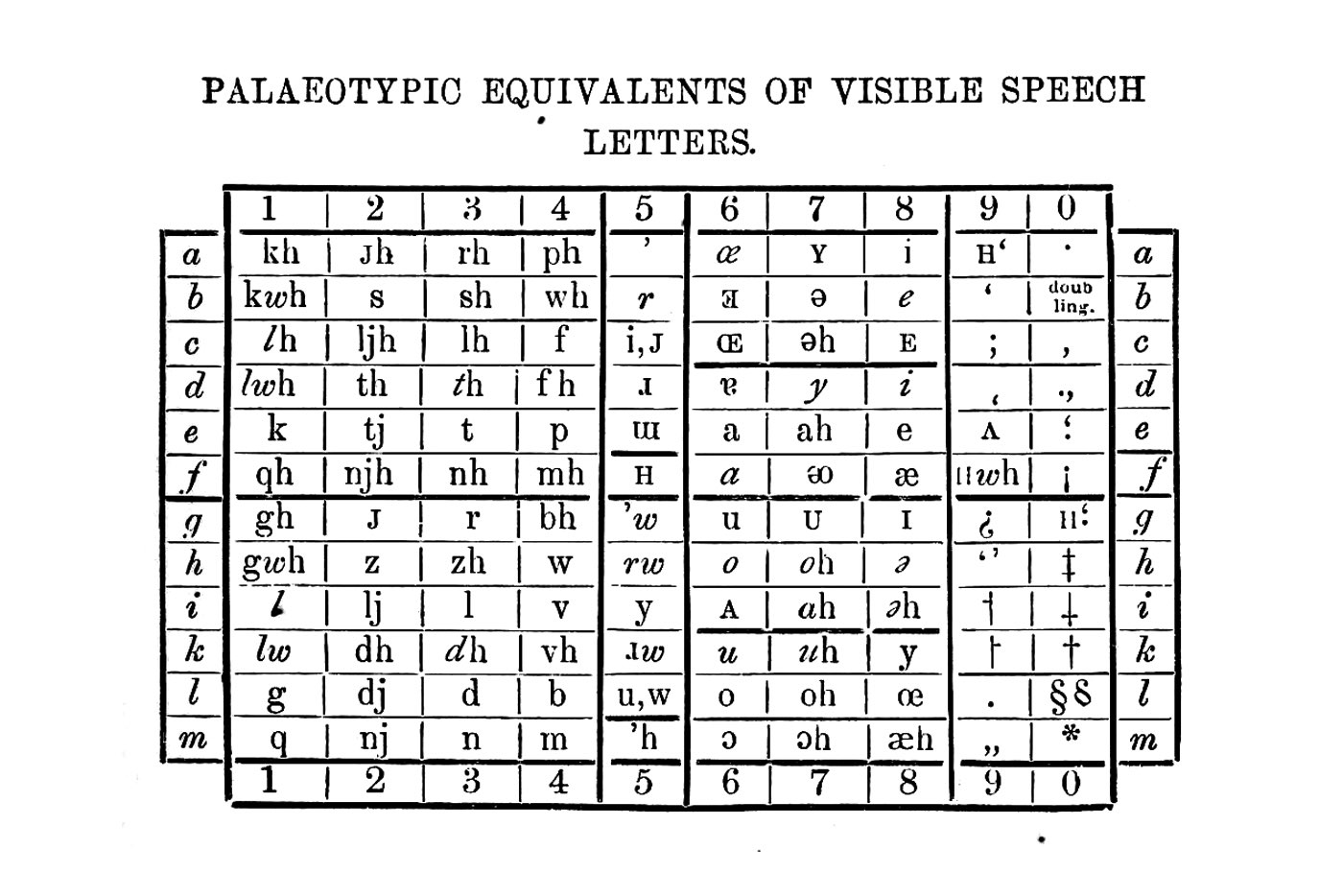 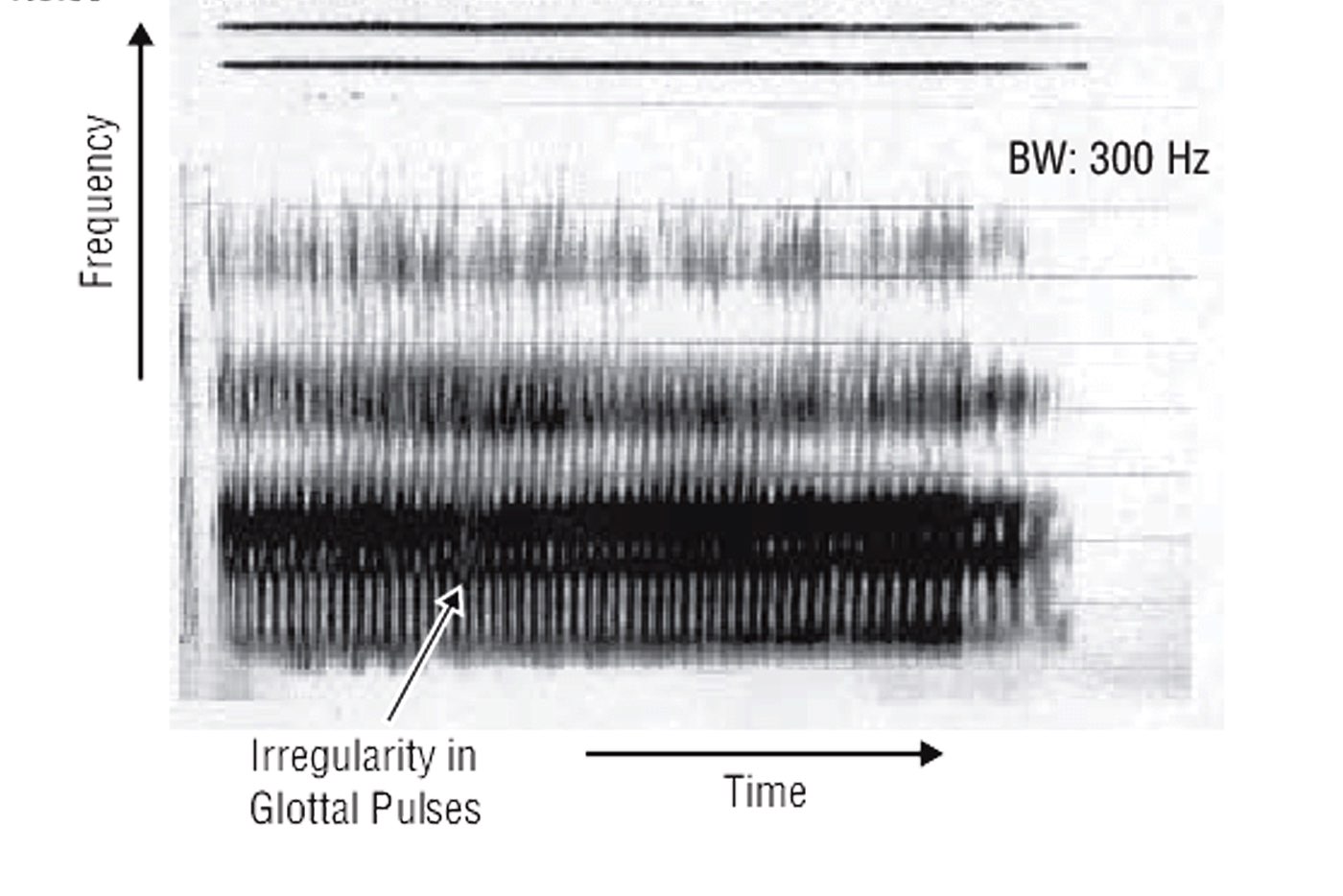 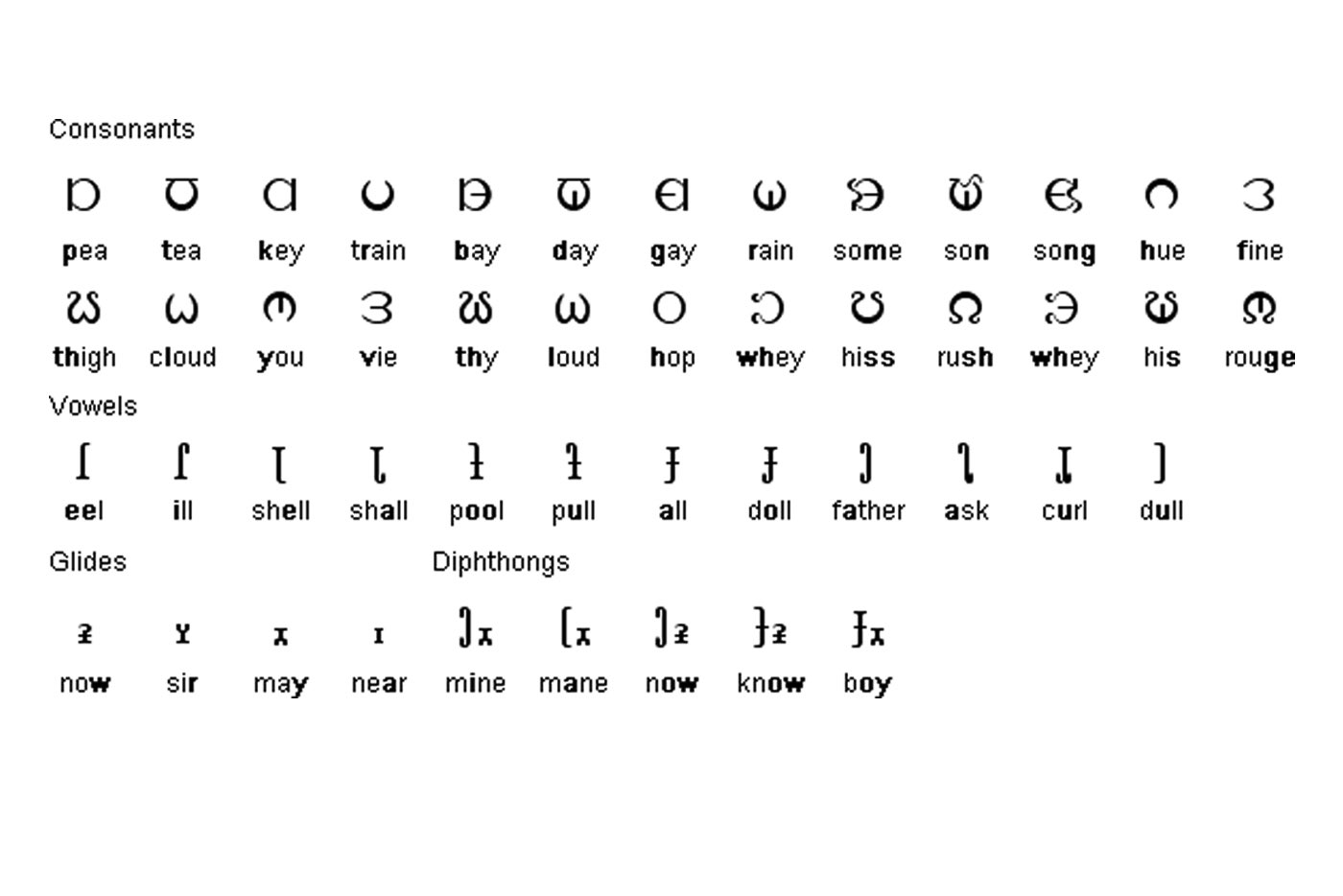 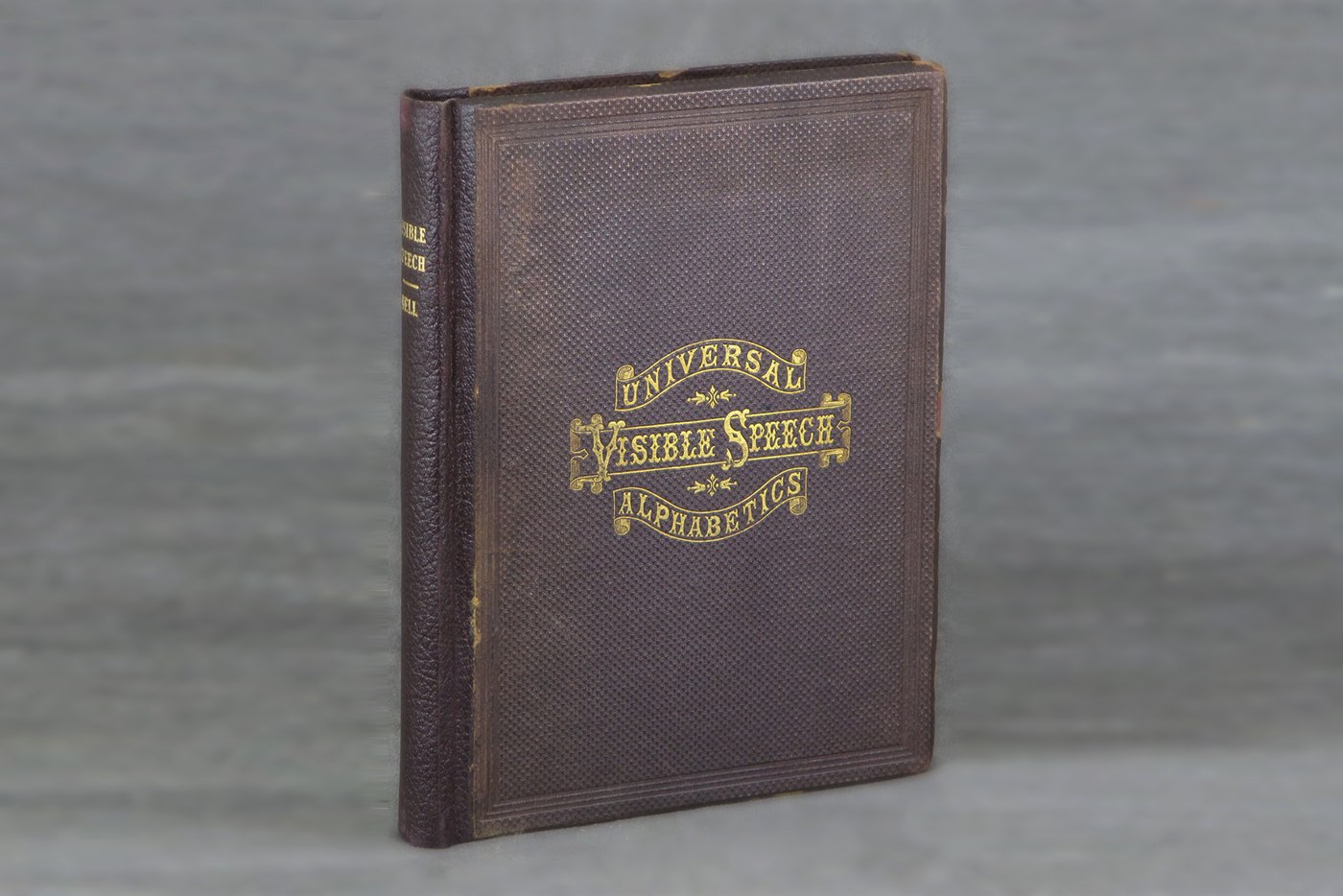 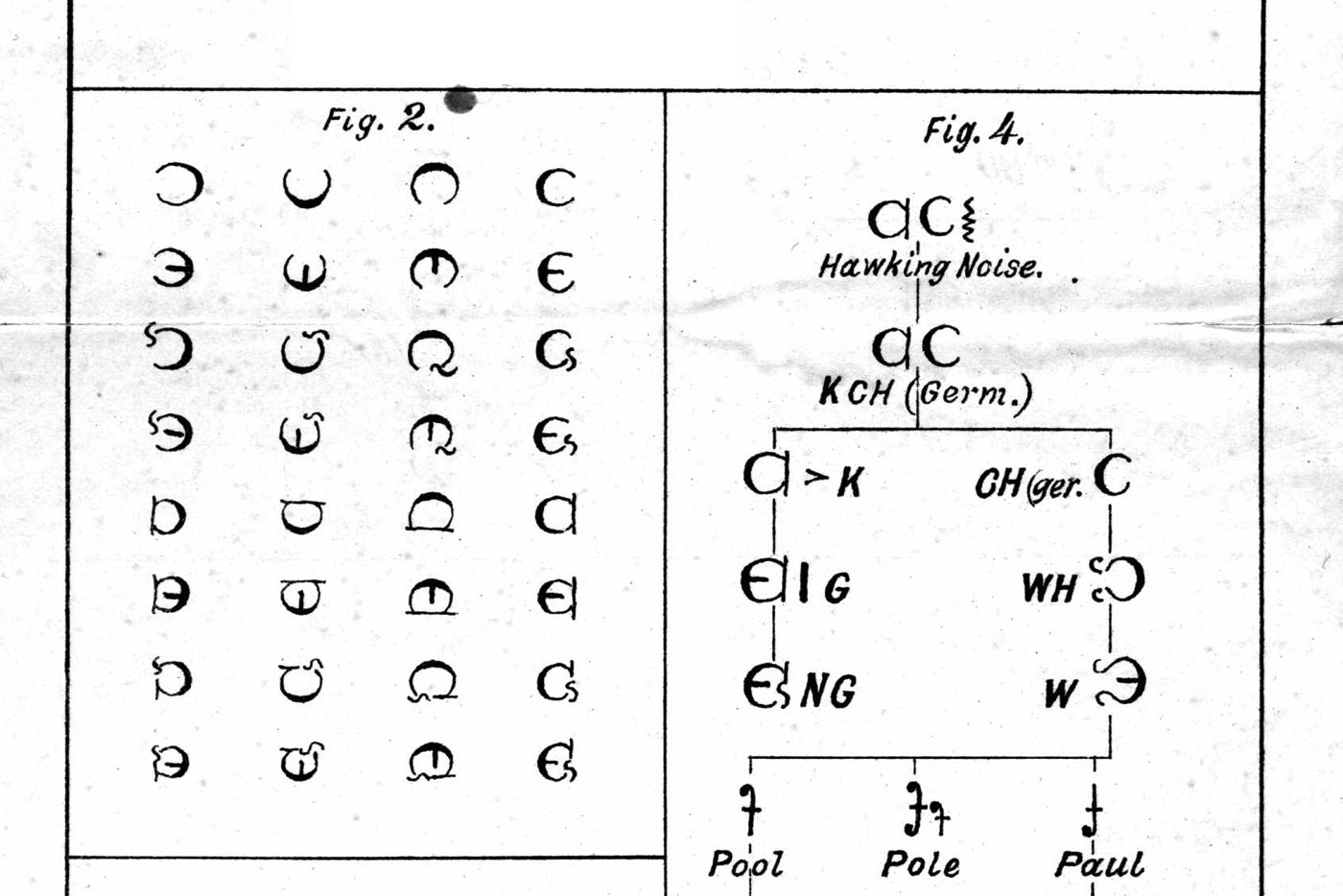 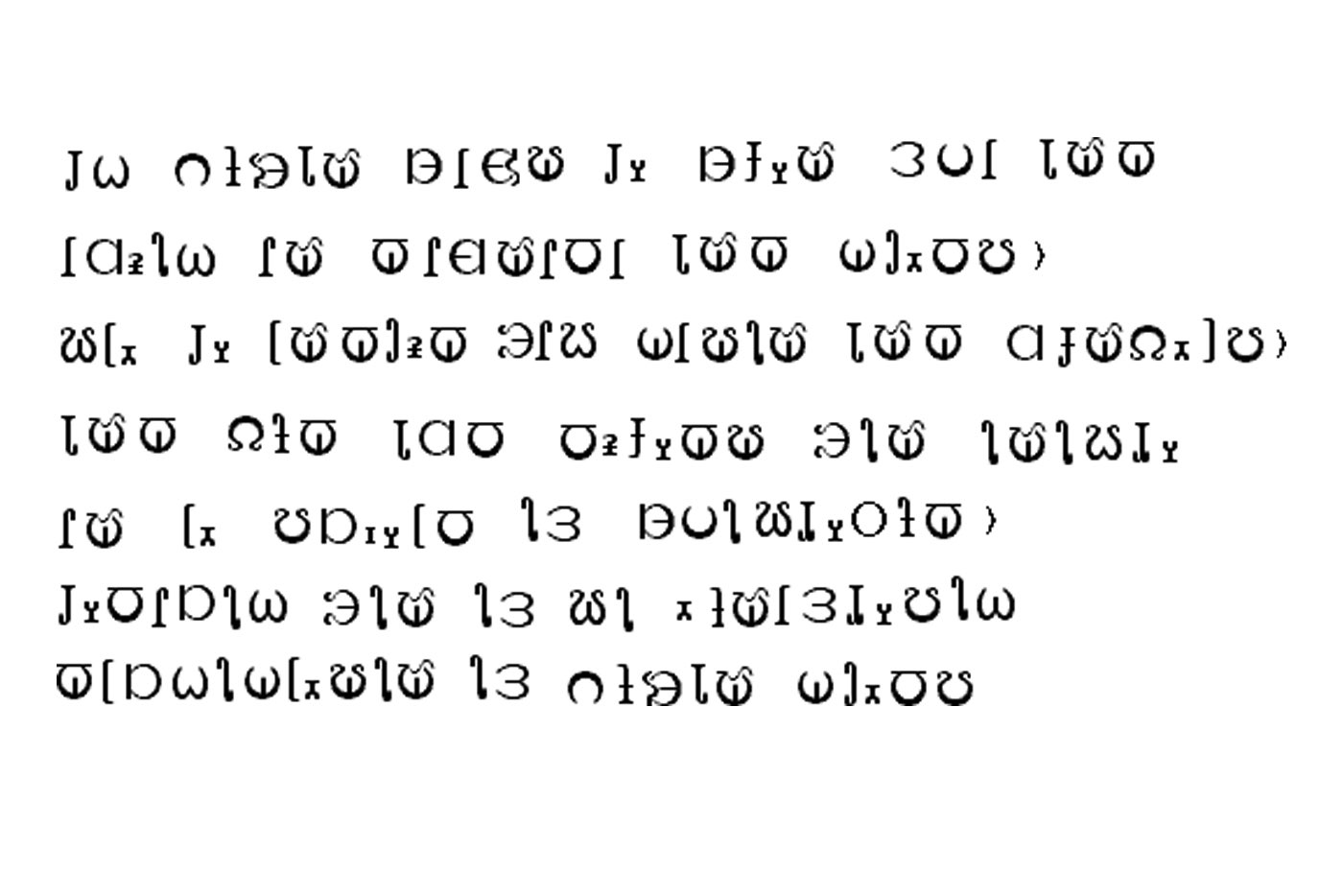 Sign language is often regarded as an auxiliary type of communication. Yet sign language is a proper language with its own set of grammatical rules. Unlike most languages it does not use a written script but uses a visual-gestural modality in which the hands and facial expression prevails. The question ‘Do you see what I mean?’ can be taken quite literally in sign language. In 1867, the Scottish Phonetition Alexander Melville Bell developed a universal notation system which could represent every sound in human language. He designed an Alphabet that could help the deaf learn to understand spoken language.

The ‘Visible Speech’ system by Bell – yes indeed, family of the inventor of the telephone – applies a set of phonetic symbols. The abstract signs indicate how the mouth should be positioned to produce certain speech sounds. The set of circles and lines represent the place of the passive and active articulators of the speech organs. Each sound in the script shows whether a consonant is voiced or voiceless and in which position the tongue or lips should be positioned. Easy peasy. ‘The learner will discover the real symplicity of the symbolization in connection with the known sounds of his own language; and when he has mastered vernacular reading, foreign varieties of sound will present little or no difficulty.’
That all sounds very fine, but the reality is harsher. There was little support within the deaf community for Bell’s system. They prefer to use sign language, a language that has its own grammer and has a visual modality. Hand gestures are made for watching rather than listening. Each language has its own sign language with its own culture. Just like spoken languages, sign language is subject to change and is not interchangeable or universal. Besides, spoken language is often a second language for people who are born deaf.

In the Netherlands, sign language (Nederlandse Gebaren Taal – NGT) has existed since 1790. Yet only last year, the Dutch First Chamber supported an initiative legislative proposal to recognize NGT as an official language. NGT is the mother tongue of approximately 30.000 deaf people and an auxiliary language for 200.000 hearing impaired. The initiative legal proposal is still under debate. If all goes well, NGT wil become the third official language in the Netherlands, next to Dutch and Frisian.
Meanwhile an original and fragile copy if Bell’s Visible Speach is stored behind glass in the Alphabetum in The Hague. A curious example of one of the many writing systems in the world. By the way, the Visible Speech Alphabet by Bell is encoded in Unicode and can be applied digitally.

Visible Speech, the Science of Universal Alphabetics; Or, Self-Interpreting Physiological Letters, for the Writing of All Languages in One Alphabet, Illustrated by Tables, Diagrams, and Examples. Alex Melville Bell, Simpkin, Marshall & Co, 1867