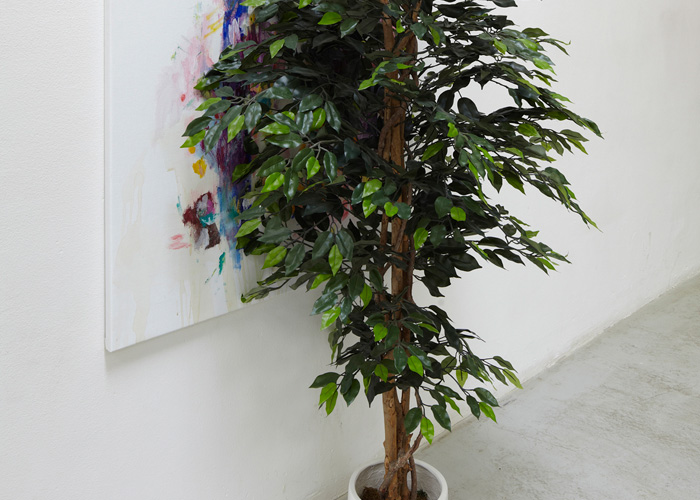 At invitation of West, Toke Lykkeberg of IMO, Copenhagen, has organized an international exhibition with ten artists: Søren Thilo Funder (DK), Jens Haaning (DK), Lasse Schmidt Hansen (DK), Marie Kølbæk Iversen (DK), A Kassen (DK), Leopold Kessler (DE) Josh Kline (USA), Rasmus Hoj Mygind (DK), Torben Ribe (DK) & Hennessy Youngman aka Jayson Musson (US). A group of young artists of whom eight are showing work in the Netherlands for the first time. The title of the exhibition ‘I feel like I'm disappearing, getting smaller every day / but when I look in the mirror, I'm bigger in every way.’ is taken from the Sonic Youth song ‘Tunic’ about the anorectic Karen Carpenter and based on the idea of a minimal art as a contemporary art ‘disease’. Is new minimalism originated by a modern depression or a just simple wish to strip off? Lykkeberg questions minimal art today. An exhibition that cut things to the bone until there is almost nothing left.

The widespread idea that an artist today can do whatever he or she feels like implies that an artist does not necessarily have to do much or anything, almost. Given the high status of art as well as artists in contemporary society, making and exhibiting little is often considered daring, sometimes provocative or controversial even. If art is special, the artist has to do something extraordinary. Because it is difficult to define what and who the artist is today, the artist has to prove that he or she really is an artist – unless, of course, the artist, as often seen, leaves the art institution to deal with this problem. However, if the artist’s work is close to nothing the public is left with little to cling to in asserting a given work as an artist’s artwork. This is probably what makes minimal art so hard for the general public to stomach.
In theory, minimal art making ought to be popular with the general public. Basically, by stripping art of all extravaganza and virtuosity, art gives the impression that it can be made about anything by anyone for anybody such as Andy Warhol’s Campbell’s Soup Cans. Great art is no longer synonymous with great effort. In this sense minimal art is democratic. At the same time, insisting that a seeming lack of activity is synonymous with art is also aristocratic. It is only the privilege of the happy few to exclaim such as Algernon in an Oscar Wilde play:‘It’s awfully hard work doing nothing. However, I don’t mind hard work where there is no definite object of any kind.

We would like to invite you to introduction and the special opening on Friday 29 July at 4 PM. For press photographs and more information please contact Marie-José Sondeijker via info@west-denhaag.nl or +31 (0)70.3925359.