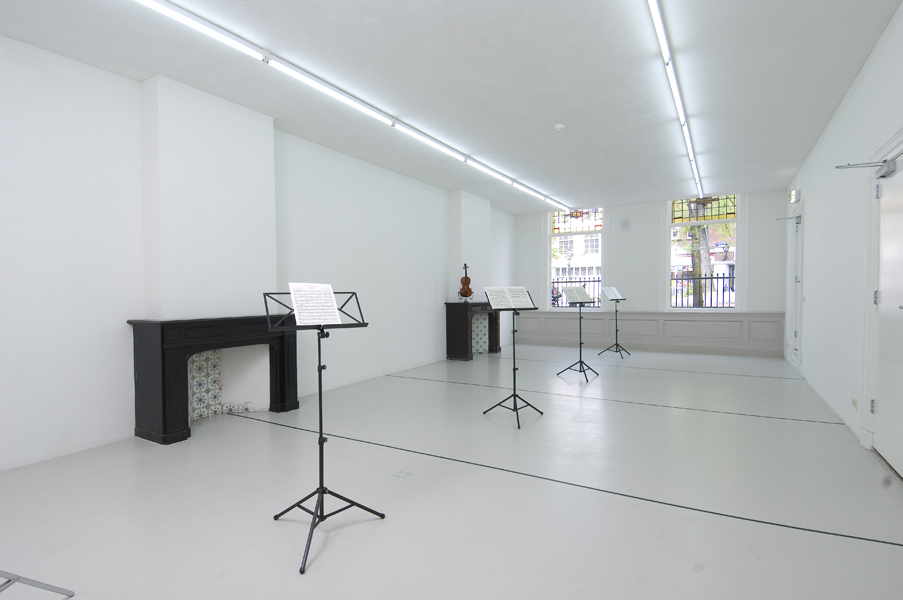 West is proud to present 1st and 3rd, the first European solo exhibition of the South African artist Simon Gush. The exhibition is number 3 in a serial of exhibitions which West is organizing at the beginning of 2010 and that is dedicated to promising young artists from outside the Dutch borders. The exhibition will comprise of a new installation in the main gallery, as well as two recent videos.

Simon Gush (SA, 1981) is one of the young artists who shapes a contemporary language for politics in art. Gush’s practice attempts to examine minor points of cultural interactions and configurations as a means of understanding larger situations. His videos, installations and texts aim to raise questions around specific political issues. While the work covers a wide range of interests and subject matters (from soviet musicians to football and the Lindy Hop), each piece proposes to find a new way to try encourage the audience to approach the given question from a different perspective.

The title of the exhibition, 1st and 3rd, is inspired by the fact that during the funeral of composer Sergei Prokofiev in 1953, his friend and fellow musician David Oistrakh played the 1st and 3rd movements Prokofiev’s Violin Sonata No.1, (1946). This is a piece of music that has been described by Prof. Ronald Woodley as follows: 'Throughout its four movements (…) one senses a powerful undertow of struggle. Yet it is not the struggle of a work against something outside of itself, but rather the struggle of something within the work, unmanifested, trying desperately to break out, and constantly finding its emergence ‘blocked’ by the existing, outward form and language of the piece.' Prokofiev had dedicated the piece of music to Oistrakh, who wrote: 'S. Prokofiev’s F Minor Sonata is a tremendous epic work in which the picture of the past of our great country lives again and in which the composer’s thoughts about the his people’s fate take form.' (from: David Oistrakh: Conversation with Igor Oistrakh, 1977 by Victor Jusefovich )
These different views on the music give an insight into the conflict both men faced. Both were deeply committed, without irony or force, to being a populist voice of the Soviet people and state. However, they had also made a commitment to modernist and progressive movements in music, which were frowned upon by the state. Gush works with the tensions between these desires as a way of talking about the idea of a political instrument and how art might articulate ‘the political’.

Several (used) objects and small installations have been placed in the main space which is divided for this in 4 equal sections. Gush will only use the first and third part visible, but the entire space makes an installation.

The video Underfoot (Vooruit) (2009) attempts to examine the complex negotiations that can take place during cultural interaction and influence. Inspired by a historical anecdote about the Harlem Globetrotters, the video shows a couple performing the Lindy Hop (a form of swing dancing popular during the late 1920s) on a floor that has been covered with Coca-cola and thus rendered sticky. The performance was filmed on location in the ballroom of the Vooruit in Ghent, a multi-use arts building and formerly a socialist community center built in the 1930s.

A second video, In the Company Of (2008), depicts a football match played across railway tracks in the neighborhood of Moscou in Ghent. Each player’s voice in this 5-a-side game is separated and played individually through one of the ten speakers that make up the installation. The participants in the game are largely immigrants to Belgium, hailing from both inside and outside the E.U. The piece attempts to bring into focus the fact that the surface of cultural negotiation is a contested space.

Gush studied at the University of the Witwatersrand, Johannesburg and is Laureate of HISK in Ghent, where he completed a two-year residency in 2008. Recent exhibitions include solo shows at Michael Stevenson, Cape Town and at Brodie Stevenson, Johannesburg (both 2009) as well as the following group exhibitions: Lulea Art Biennale, Lulea, Sweden (2009), HISK in Watou, Belgium (2009), Palazzo dele Papesse, Siena, Italy (2008) and Centro Cultural Matucana 100, Santiago, Chile (2007).

We are pleased to invite you to the official opening on Wednesday April 21 at 17:00.