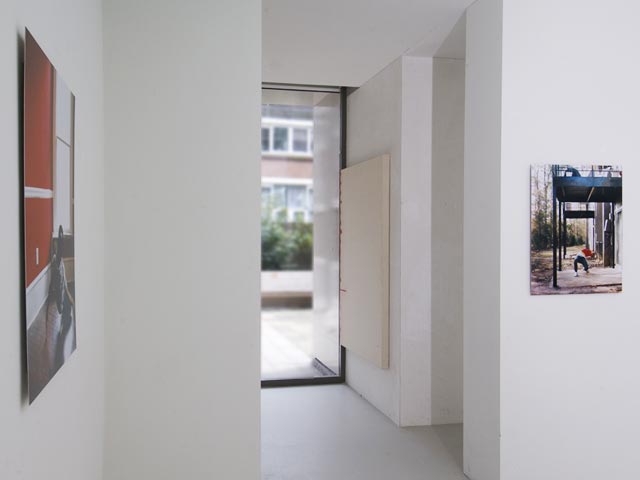 New works by Tom de Groot, Mark Vincent Houston and Jasper Niens Summer exhibition in 3 parts - Saturday 02.08.2008 till Saturday 30.08.2008 Opening: Saturday, 02.08.2008, 16.00 - 18.00
West is proud to present the summer exhibition in which three young artists show their work. In the back room systematic paintings of Tom de Groot, in the main room the anthropological photographs of Mark Vincent Houston and in the side-chamber spatial studies by Jasper Niens. An exhibition in 3 parts with 3 different viewpoints to focus on and 3 different fascinations. The only similarity is the fact that the artworks are new, all works in this exhibition are shown to the public for the first time.

You are welcome on the opening by Nele Buys, Director ‘vzw De Console’ Belgium on Saturday august 2th at 16 h.

Tom de Groot (Netherlands, 1977) works with PUR foam, epoxy, silicone, and pigments on traditional canvas. He examines different ways in which the canvas can be used and researches the borders of painting. At his solo-exhibition - in the old West - we saw sculptures where foam dripped completely over the canvas. Canvas screens neatly prepared or negligently folded away remained recognizable while the polyurethane bulged over the edges in violent colors.
For this summer exhibition De Groot has made new works in which his research continues. Again, that results in fresh paintings in clear colors. But the work has become less random. Using a more or less symmetric groundwork and a certain feeling for order, his work has developed and the young artist seems to be more sure in his choices. His idiom has remained the same, the material experiments continue.

Mark Vincent Houston (USA, 1976) graduated in 2007 from the Rietveld academy, Amsterdam with a cinematical portrait of an – also for him –unknown man. In this monumental series of photos, Houston puts the emphasis on the context of the portrayed nameless person. In this way, an image of an empty street also becomes part of the portrait. The jury of Steenbergen Stipendium chose him as the best young graduating photographer.
At West he shows ‘Pollination’. A project in which Houston has been figuring out how to get people to levitate. He discovered that a particular group of young people in his hometown of Harlem, New York City, had created a dance similar to his vision. Actually, this dance had been around earlier. Fascinated by the movement, that is a combination of athleticism, dance and martial arts, Houston began to film people in the smaller cities in the United States where this unique dance has migrated. Ultimately, photographs show exactly what he wants: the moment when the dance hovers between grace and tragedy. The irony is that the dancers, in order to win a dance competition suddenly drop to the ground to score points. A pose that is found simulated in fashion magazines.
The work of Houston appears to be trendy, but the opposite is true. His timeless work shows a large fascination for the ‘Moment in between’. Using a medium format camera, he freezes the movement. He shows silence. His work is more than a beautiful image and like a modern anthropologist he lets you truly look at people.

Jasper Niens (Netherlands, 1980) is well known for his serious architectonic interventions. He almost forces people to undergo his work. He gives the spectator an experience, a different way to look at the world. As in the presentation in a Dutch museum where he changed the entrance in a space with 48 doors. This functioned as a maze. And a car which you could transversely pass by means of a tunnel in an angle. December last year Niens has build an installation of 5 x 5 x 1.7 meters in West where the visitor was forced to participate. As in some computer games an obstacle had to be overcome first before the visitor can go further. The heavy sculpture had to be moved - by each visitor again - to enable them to see the other part of the exhibition. Because of the enormous weight people had help each other out (and in). No other exhibition has elicited that many responses.
Because Niens has more plans than he can carry out, has more ideas than time and 'faces reality regularly' he has been searching for a new way of presenting his work. During his stay in the BKVB residency in the Banff Centre, Canada (in the spectacular surroundings of the Rocky Mountains) he has worked on a new way of imaging his concepts. Accessibility versus risk versus security and the lack of it in nature. This summer in West he shows the results of this study period in the form of a performance on film and models in bronze.