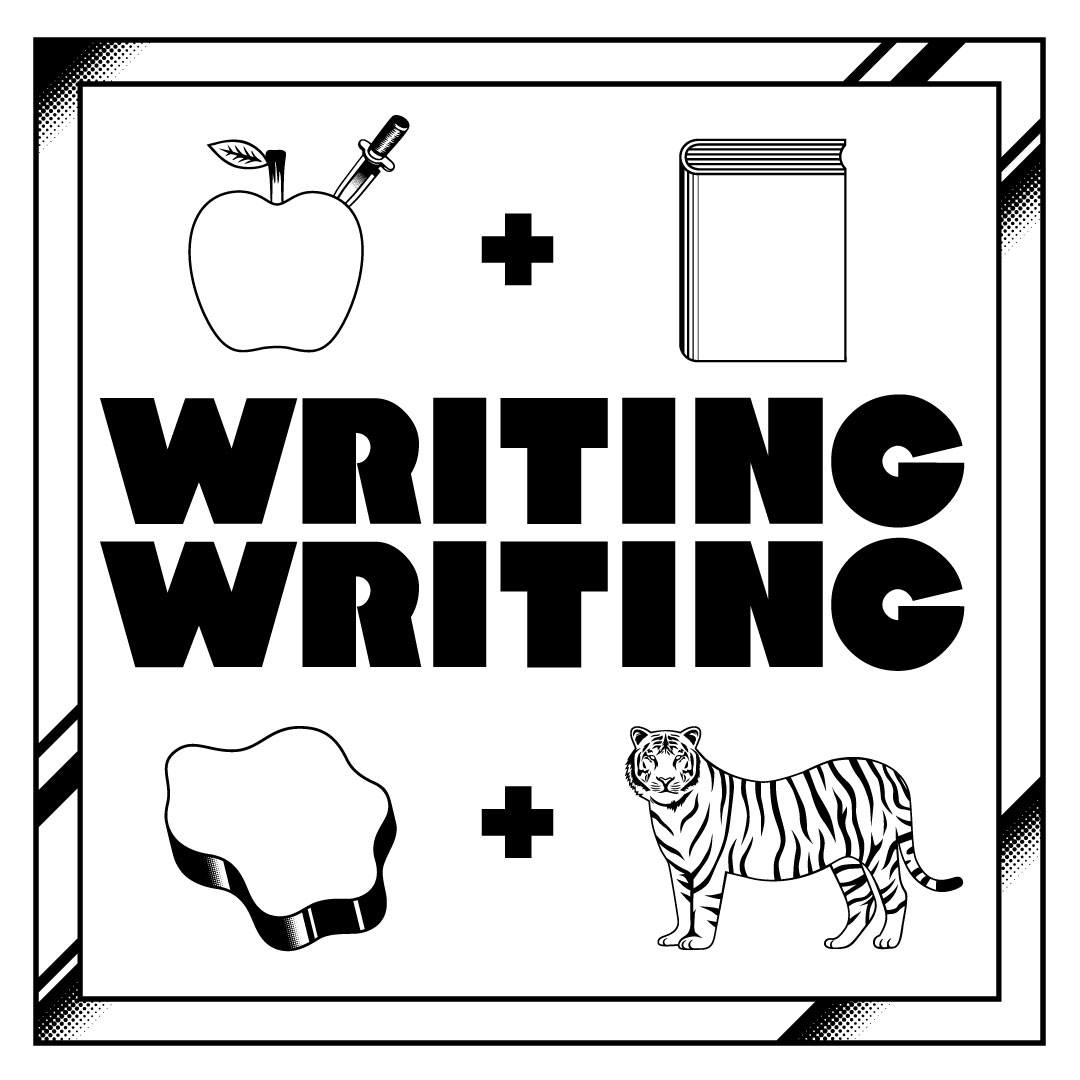 Writing Writing is an exhibition of new work by five graphic designers who operate in multiple and simultaneous modes of creative production, notably as researchers, educators, writers, and critics. The exhibition is based on the idea of parataxis.

Parataxis in writing is composed of short sentences that lie together, forming a greater narrative because they are placed in juxtaposition, not in an umbrella-like format. Visually, parataxis is akin to taking two disparate images and placing them together in order to create new meaning. Parataxis is the jump between the meaning of one object and the meaning of another object, their collocation creating implied meaning. Each of the participants explores various approaches to the connotative and denotative through writing (e.g: literature) and writing (e.g.: composition). Each conjures lyrical/poetic form in both the text and how it is concocted — creating something that is ‘haunted’ (in the sense of Derrida’s ‘hauntology’).

About the participants:
Ian Lynam operates the Tokyo, Japan design studio Ian Lynam Design, working across identity, typography, and interior design. He is faculty at Temple University Japan, as well as at Vermont College of Fine Arts in the MFA in Graphic Design Program, and is Visiting Critic at CalArts. Ian writes for IDEA (JP), Slanted (DE), and Modes of Criticism (PT) and has written a number of books about design and culture. Originally hailing from New York, Lynam has a BS in Graphic Design from Portland State University and an MFA in Graphic Design from CalArts. He is co-founder of the critical cultural online journal Néojaponisme and the associated print journal NJP. Ian runs Wordshape, a hybrid type foundry, publishing entity, distributor, and occasional software company.

Matthew Monk is a visual artist, graphic designer, and educator, currently serving as Academic Dean at Vermont College of Fine Arts in Montpelier. He is on the faculty in the MFA in Graphic Design program at VCFA and previously taught for twenty years at Rhode Island School of Design as a tenured full professor in the Graphic Design department. Matthew exhibits his collage and mixed-media works extensively and is in collections across the United States and abroad. His book design practice has earned numerous awards for clients including The National Gallery of Art, Yale University Press, Harvard University Graduate School of Design, Metropolis Books, The Museum of Art at Rhode Island School of Design, and Wellesley College, among others.

Randy Nakamura is a writer, designer, and researcher who teaches at California College of Art (CCA) in San Francisco. He is currently a Ph.D candidate in the Critical Studies program at UCLA Architecture and Urban Design. As a researcher he has contributed to the 2013 Pacific Standard Time exhibition Everything Loose will Land for the MAK Center and Getty Foundation focusing on the art and architecture of Los Angeles in the 1970s. His writing has been published in Design Observer, Emigre, Task, Modes of Criticism, and Idea Magazine. Previously he was the Director of Design for The Grateful Palate.

Chris Ro is a graphic designer based in Seoul, South Korea working on projects spanning both the cultural and commercial sector. Originally educated at UC Berkeley and the Rhode Island School of Design, the thinking behind Chris’ work connects a diverse range of concepts spanning architecture, graphic design, typography, motion, photography and form making. His work has been honored by the Type Directors Club of New York, Communication Arts Typography Annual, Print Magazine Regional Design Annual, The Korean Society of Typography, Output, The Cannes Cyber Lions, The Webby Awards and The Favorite Website Awards. He was formerly a chief curator for the Typojanchi 2015 International Typography Biennale. Chris has exhibited his work around the world—most recently at Die Neue Sammlung in Munich and the Paris Museum of Arts Decoratifs where his work is now part of both of their permanent collections. Chris’ work is also part of the permanent collection of the National Hangul Museum in Seoul. Chris currently teaches design, typography and form-making at Hongik University in Seoul, South Korea. Chris is also a member of the Alliance Graphique Internationale(AGI).

Gail Swanlund’s creative work has been exhibited at San Francisco Museum of Modern Art (SFMoMA), Los Angeles Contemporary Exhibitions (LACE), CAM Raleigh, Pomona College, the Biennial of Graphic Design in Brno, Czech Republic, and elsewhere. Her work may be found in public collections, including Getty Research Institute, Los Angeles County Museum of Art (LACMA), Merrill C. Berman Collection, and SFMoMA. She held a seat on DesignInquiry, a vanguard educational non-profit organization whose mission is to cultivate the collective goal of extra-disciplinary discourse, productive counter-production, and research of design, and is gearing to launch an ad hoc detachable semi-organized ‘Wild & Free Friends of DesignInquiry.’ Swanlund received her MFA from CalArts where she is an Art School faculty member in the Graphic Design program; she also co-teaches courses and workshops with faculty from other schools across the Institute.