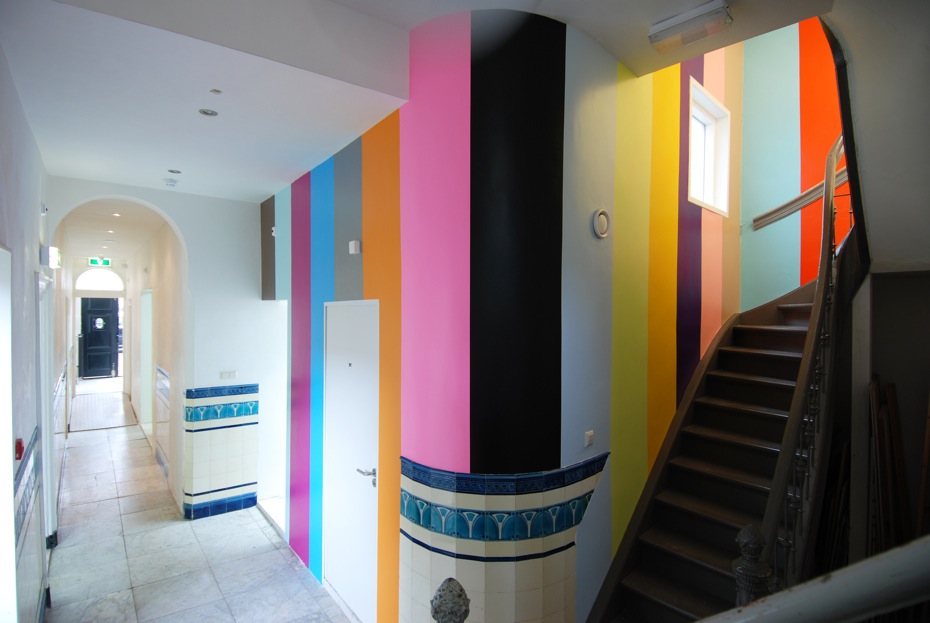 Geometrical art takes on many forms and meanings. Sometimes a geometrical work of art is well defined in space, primarily the sculptures which originated within the sphere of minimal art. They possess an almost authoritarian, monolithic quality and relating to if not actually defining the space they’re in.

The paintings by Jan van der Ploeg (1959, Netherlands) are not concerned with finite composition and can be thought of as parts of a never-ending whole. Also the new, elongated horizontal paintings by Van der Ploeg show no personal handwriting, no pictorial ‘signature’, no gestural traces. These paintings want to be statements of facts, not the expression of emotions. They consist of elementary forms like the triangle or the parallelogram which are for instance presented in horizontal ‘lines’ covering the whole canvas from left to right and from top to bottom. These forms are alternately presented in a colour (black or blue) and white. The fact that all the lines start with an extreme part of the basic form emphasizes the notion that what we see is not a finite composition but rather part of a larger, possibly infinite whole that far exceeds the canvas. On this theme many variations are conceivable which ‘may or may not be executed’, to borrow a phrase from Sol LeWitt.
The optical results are such that we can’t perceive the whole painting in one glance, one has to focus on the different parts to understand the structure that is offered. Moreover, as static as they are, the paintings tend to suggest constant movement to the eye and when one looks at them for a period of time the image blurs and becomes one undulating, rhythmically moving whole. The sense of self, the clear boundaries between subject and object seem to dissolve and lose their meaning. Mirroring both microscopic and macroscopic worlds these paintings are literally uni-versal.

Geometrical art works ‘refer only to themselves’. The expression illustrates the degree to which these artworks are (or aspired to be) independent of hierarchical values in the rest of the world. In All systems go!, Gerold Miller (1961, DE), Heimo Zobernig (1958, AU) and Beat Zoderer (1955, CH) each show one piece of an almost ‘monolithic’ quality.

Especially for West, Jan van der Ploeg will produce a permanent wall painting in the staircase. The exhibition will be accompanied by a new publication with a text by art critic Philip Peters.