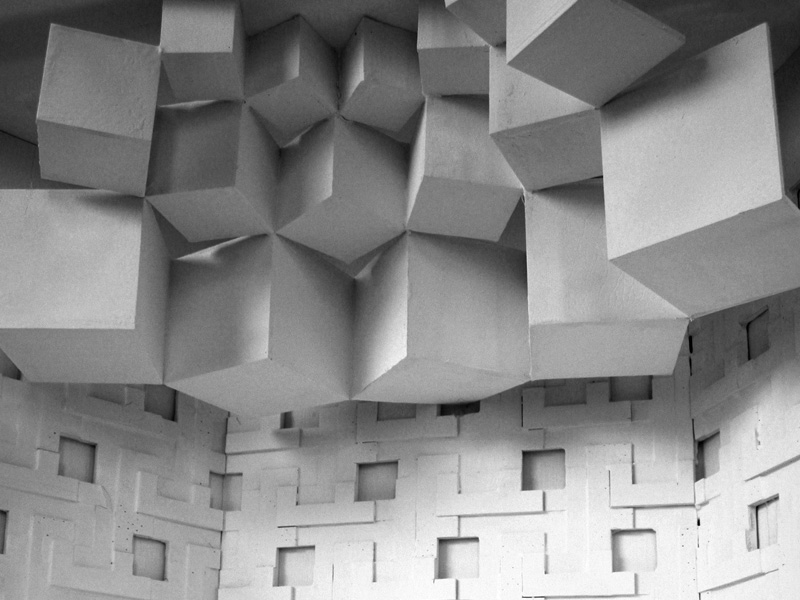 During Bunker #04 Marielle Buitendijk (NL, 1976) is – for the first time in the series – presenting paintings in combination with three-dimensional work. Buitendijk’s paintings stand out by the applied ‘spray-paint’ technique and the chosen theme that mostly contains abandoned public spaces from which the dimension ‘time’ is removed. The fictive spaces are loaded with tension and call up almost inconvenient associations among the audience. Buitendijk however points out that the monochrome paintings do not depict moments of reality. With her limited use of colors her work obviously refers to history. By applying the paint with spraying cans on aluminum plate a misty, soft layer appears on the base. By this means, Buitendijk creates a vague image, an illusion connecting different locations and timelines.
In addition to new paintings, Buitendijk is going to show a relief of ± 2.5 x 8 meters which has been specially made for the Bunker and is an exception inside her oeuvre. Consisting of blocks of 3 different volumes, the relief is a strong reaction to the atypical exhibition location and to the post-war architecture of the Fifties and Sixties of the last century. Besides that, Buitendijk will exhibit one of her architectural models on which her paintings are based.
A bunker is clearly related to a certain period in history and nowadays a useless space. The ambivalence between desolation and crowdedness, between somberness and commotion are characteristic for Buitendijk’s work as well as for the Bunker that makes this location, against all expectations, the perfect location to accommodate new work of Buitendijk.
Marielle Buitendijk lives and works in Rotterdam. Her work was previously on display at, among other places, the NAI, Rotterdam, Aschenbach & Hofland Galleries and The Dutch Bank in Amsterdam, at Museum GEM and Nest in The Hague, at Sign, Groningen and at Art Amsterdam, Art Rotterdam and Kunstvlaai. In 2005, Buitendijk received the Dutch Royal Awards for Painting.

By offering a free summer program at the Bunker, West wants to bring conceptual art to the audience, preferably in a public and easily accessible location. The busy Westbroekpark is a designated place for it.

We kindly invite you to the official opening of the fourth edition on Saturday, July 31 at 17:00. Followed by the ‘Single Malt Whiskey Tasting’ with live music at 19:00 on the terrace of Waterkant.

For high res. photos or more information, please contact us at 070.3925359 or info@west-denhaag.nl Marielle Buitendijk is working on location in the Westbroekpark in week 30 and will be available for interviews.