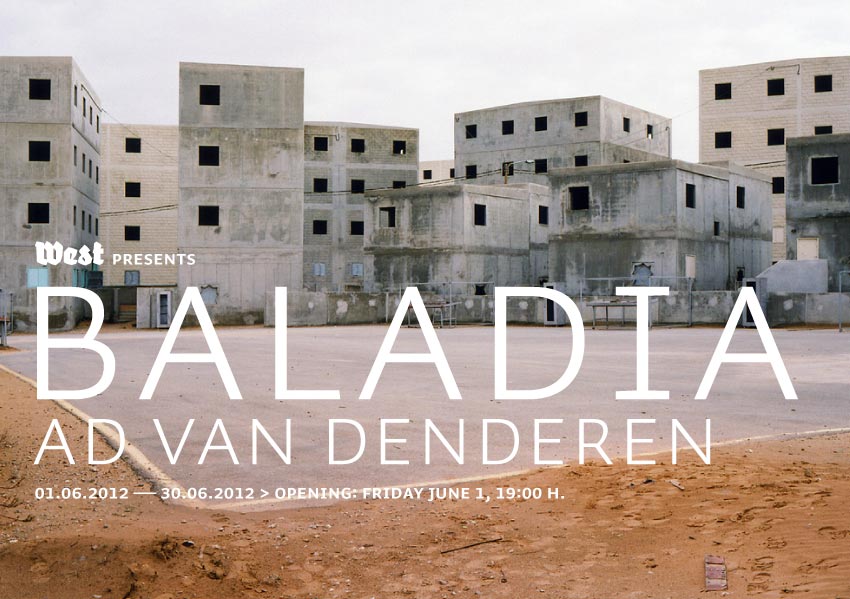 A project by Ad van Denderen

Ad van Denderen has visited Israel and the occupied areas several times. For decades, he has been an eyewitness of this conflict and he has recorded crucial moments. Van Denderen managed to obtain access to the everyday life of Israeli and Palestine people and, from the insight, reported meticulously on the madness of this inextricable misunderstanding. However, he keeps being enmeshed in this conflict, and in February 2012 he went back to portray the National Urban Training Center Baladia. Baladia is a totally desolate ghost town, consisting of 472 buildings, 1200 doors, 2500 windows, several lift shafts, 6.5 km of paved and unpaved streets, a complete tunnel system, mosques and a hospital, home for the elderly, bank, school, cemetery annex football pitch, police station, kasbah and fugitive camp. Baladia is used for test attacks on Gaza, West Bank, Lebanon and Syria, and man-sized holes have been constructed in the walls and dividing walls of the houses, in concrete moulds.
In his project Baladia, Ad van Denderen has made a presentation, in which old and new images transect each other. Thus, various periods are interconnected and the tragedy of this region is clearly portrayed, without adopting a stance. In West’s three different rooms, three different aspects will be accentuated, and this conflict will be pulled apart visually by Van Denderen.

Ad van Denderen (The Netherlands,1943) is one of the leading Dutch photographers. Since 1965 he has become well-known for numerous reportages that he made abroad for magazines like Avenue, Geo, Stern, The Independent, NRC Handelsblad and Vrij Nederland. Unlike many photo journalists, Van Denderen is less interested in that one, unique news picture. With a slower, more contemplative way of working he attaches to a movement that is known internationally as 'slow journalism'.
For years he has focused on a limited number of current issues such as the problem of illegal migration and developments around the Mediterranean area. This working method resulted, in large intervals, in books and exhibitions such as Welcome to South Africa (1997), Peace in the Holy Land (2003), Go No Go (2003), So Blue, So Blue (2008) and Occupation soldier (2009).
Each project differs from the next one, not only in the issue that is brought up, but also because of the investigative approach of Van Denderen. The viewer can watch his perspective changing: from objective to almost obsessive. Color, brightness and composition enhance the informative aspects of the pictures. Human relationships always play the leading role even though the image only contains a deserted road with stones. But Van Denderen does not take a stand. He really hates ‘Palestinian women lifting their hands to heaven when they see a camera.’ Van Denderen avoids clichés and chooses his moments very carefully.   Van Denderen’s work has so far been exhibited in various museums (amongst others in the Dutch Photo Museum, FOAM Amsterdam, the Royal Tropical Institute, Stedelijk Museum Amsterdam, Photo Museum Winterthur and the Bellevue Art Museum in Seattle). In recognition of his achievements in the field of photo journalism, in 2008 Van Denderen received the prestigious oeuvre award of the Dutch Foundation for Visual Arts, Design and Architecture (Fonds BKVB), in 2002 the Dick Scherpenzeel Award and in 2001 the Visa d'Or award in Perpignan, France.

Ad van Denderen is, by appointment only, available for interviews.