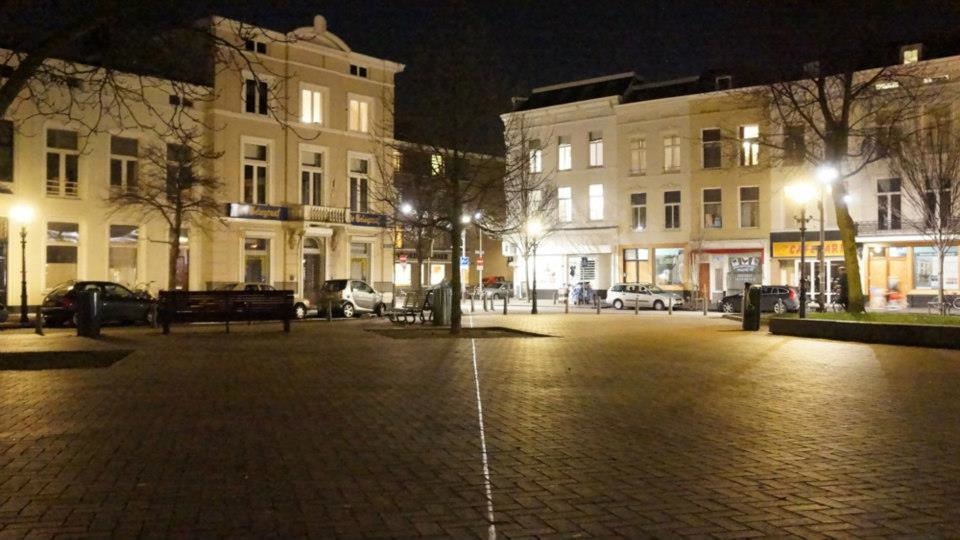 Tiny Tickle Gold Shine Bright Show The Teeth, 2013.
One kilometer of gold on the streets of The Hague. In collaboration with Yeb Wiersma.
Using land-measuring equipment, a territory in public space was marked with a line of gold. This frontier of leaf gold crossed side walks, streets, private property and squares. While time passed the gold slowly faded and was spread through the city of The Hague on foot soles, and car tires. This act was the prologue of the project Surveillance.

For the project Surveillance, Lotte Geeven & Yeb Wiersma formed a team, with which they claimed a part of two The Hague districts – the Stationsbuurt and the Centrum, the neighborhoods surrounding West – as their working and research area. In the course of a month, this area of about one square kilometer became a dynamic space, in which the mechanism of observing is scrutinized in a rough manner with various interventions and using a script that is composed of seven life & site-specific acts. The borderline between acts and reality was desultory for the passers-by. In Surveillance, Geeven & Wiersma investigated the sovereignty of the public space. In doing so, the artists focused attention on the habits and characteristics of the city. The script – the manual of this research – consisted of directed acts that challenge the controlled establishment and made an appeal to the concept of autonomy. During that month, the script slowly unfolded and became a series of images and movements that related to the street at a fundamental level. During this project, West’s exhibition rooms functioned as headquarters, a temporary shelter for the team and an assembly point for documentation.