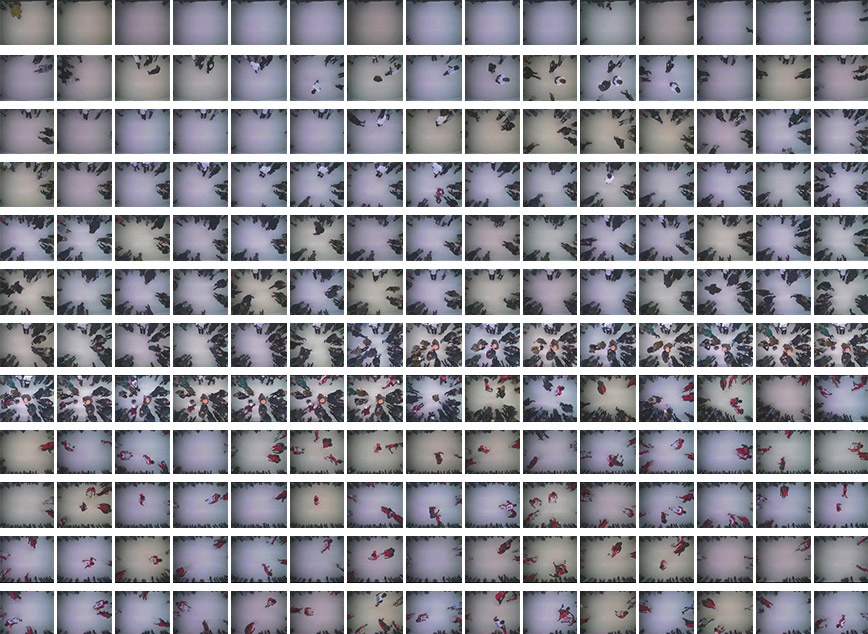 Isaacs’ principles, 2013.
surveillance camera footage (in collaboration with Yeb Wiersma)
For the opening of Surveillance at West a street basketball team was asked to be part of the crowd incognito. At a signal they bounced a ball and collectively claimed the space of the gallery with a dynamic and wild game of basketball pushing the crowd aside. This life event was filmed from above with a hidden surveillance camera in the ceiling, to be viewed by the audience in the backspace of the gallery.

01 An object at rest remains at rest unless acted upon by a force. An object in motion remains in motion, and at a constant velocity, unless acted upon by a force. 02 The acceleration of a body is directly proportional to, and in the same direction as, the net force acting on the body, and inversely proportional to its mass. Thus, F = ma, where F is the net force acting on the object,m is the mass of the object and a is the acceleration of the object. 03 When one body exerts a force on a second body, the second body simultaneously exerts a force equal in magnitude and opposite in direction to that of the first body. The three laws of motion were first compiled by Isaac Newton in his Mathematical Principles of Natural Philosophy first published in 1687, Newton used them to explain and investigate the motion of many physical objects and systems.

For the project Surveillance, Lotte Geeven & Yeb Wiersma formed a team, with which they claimed a part of two The Hague districts – the Stationsbuurt and the Centrum, the neighborhoods surrounding West – as their working and research area. In the course of a month, this area of about one square kilometer became a dynamic space, in which the mechanism of observing is scrutinized in a rough manner with various interventions and using a script that is composed of seven life & site-specific acts. The borderline between acts and reality was desultory for the passers-by. In Surveillance, Geeven & Wiersma investigated the sovereignty of the public space. In doing so, the artists focused attention on the habits and characteristics of the city. The script – the manual of this research – consisted of directed acts that challenge the controlled establishment and made an appeal to the concept of autonomy. During that month, the script slowly unfolded and became a series of images and movements that related to the street at a fundamental level. During this project, West’s exhibition rooms functioned as headquarters, a temporary shelter for the team and an assembly point for documentation.