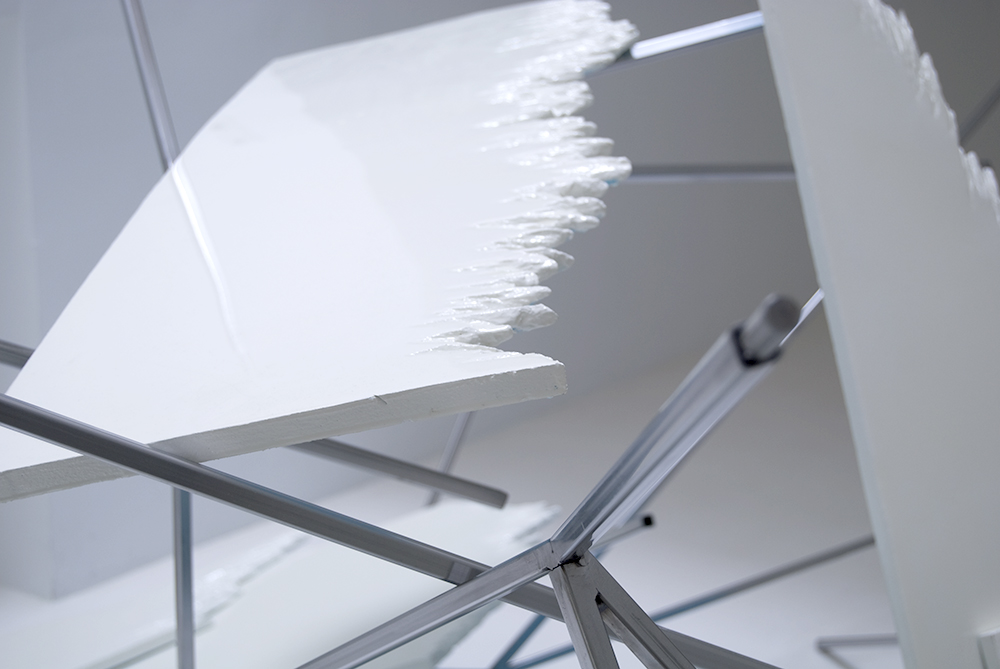 Cold Origami, 2010.
Installation
Cold Origami refers to the power of line. In this exhibition with new large-scale drawings and installations; the line folds an interior, breaks a grand mountain panorama and maps routes through strange cities and foreign landscapes. In its’ ambiguous character it explores the mechanism of memory of another place at another moment.

Cold Origami by Andrea Alessi
Lotte Geeven, who notably became the first Dutch winner of the Illy Prize at Art Rotterdam last month, is exhibiting new work at the Mart House Gallery. Titled Cold Origami, her recent drawings and installations extend from Hotel Insomnia, a growing project that she began in 2007. In this expanding body of work, real objects from the material world are refigured in the spaces of Geeven’s imagination. These constructions seemingly represent the furnishings and scenery that inhabit the world in and around her sleepless hotel. For Cold Origami Geeven presents a new room in the hotel, but also appears to move beyond its sheltered interior and into the surrounding city. Room 04 is a series of broken down and reassembled furniture. As the title of the exhibition implies, the crease, or line, is the central unit in the artist’s inventions. She cleverly slices, reverses, and reconstructs the limbs and planes of her furniture to the point where their traditional uses seem plausible but unlikely. Chair legs twist and bend; table tops fold and crinkle; armoire drawers jut out at 45 degree angles, never to be closed. Though the objects appear awkward and unusable, Geeven’s craft is so precise that her folded furnishings looks like they were originally made that way. In a series of mixed media drawings Geeven uses line to create imprecise grid systems which she connects with small dots. The drawings resemble subway maps, and perhaps represent the underground travels of the artist as she invents cities for her hotel’s wakeful dwellers. These tube lines can also be read as transparent structures, like the beams of an aviary or conservatory. They overlap plants and leaves, relating them to her sculpture Royal Botanical Garden. This sea green structure looks like the cast of an unknown space around an empty courtyard. Perhaps it is a three-dimensional blueprint beginning to take shape in this unusual world. The grand panorama is the artist’s newest work. It is an open sculpture composed primarily of bare steel beams and glossy pieces of Styrofoam coated in epoxy. This deconstructed mountain could be the view from the windows of Geeven’s hotel. Indeed, from the upper level of the gallery, one can look down from Room 04 onto its jagged peaks. In origami, an unfolded paper crane is no more than a series of crossed lines on a square. Throughout her work Geeven reveals splintered structures, reducing them to these lines. Her city is a subway map and her mountain is a stripped vista. Buildings are condensed into frames, and a hotel room comes apart at unexpected seams. Working like Mondrian in multiple dimensions, Geeven draws the street maps of her memory and imagination as lines edited from raw material. Like other young artists I have seen exhibited at the Mart House Gallery, Geeven makes work that is highly personal. She reveals a private and whimsical world hidden all around the city, creating a non-existent space so that we might partake in her imaginative journeys.