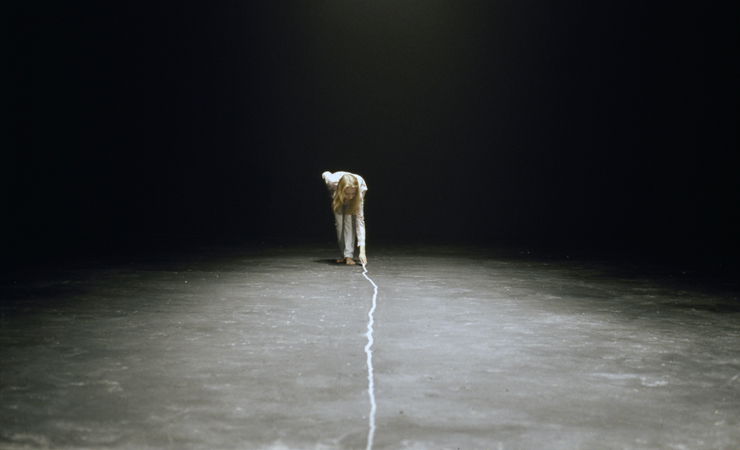 Evolutions, S16mm film transferred to digital beta and HD, stereo sound, 18:20 loop, 2008.
According to Cicero, evolution signifies the unfolding of a scroll. Evolutions unfolds the world views of youths, structures of film-making as well as the thin line between fact and fiction. Topical at a time when reality is often merely packaged fiction.
The piece has been realized communally. The seven episodes in the film, the seven stories about world views and the birth of the universe, have been created together with youths from 12 to 19 years old who share a passion for theatre. The stage for each episode and story is set up in a film studio. Minimalist sets, artificial lighting and authentic sounds morph the studio, a ”blank canvas”, into a temporary surface of projection for each protagonist’s world view. The episodes are variations on the same theme.
In Evolutions constructed images and scenes are contextualised through the process of film-making. The piece is nevertheless a hybrid, incorporating elements of experimental film and video art, performance art and theatre. The staged nature of the piece is accentuated by the use of sculptural deities, mirrors, waves replicating the ones created by Sabatini for 16th century Italian opera, as well as 18th century etchings by Wenceslaus Hollar depicting the seven days of creation in the Book of Genesis. The minimal sets and objects used in the film carry multiple meanings and references. This creates a friction between the real and its representation, between fact and fiction.
- excerpt from a text written by writer and curator Marita Muukkonen