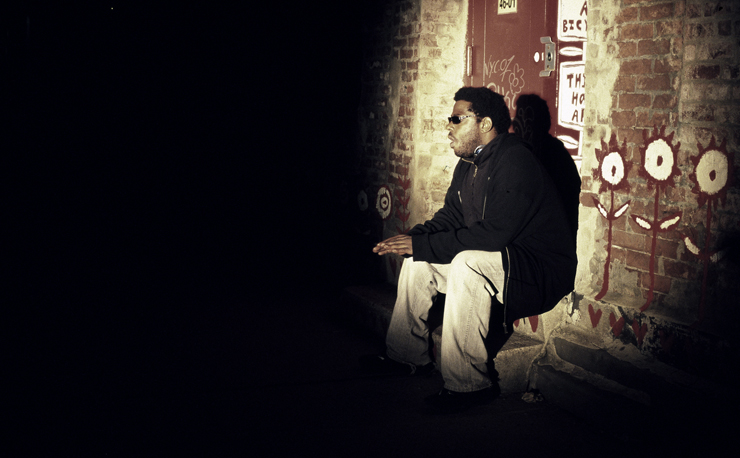 Batbox/Beatbox, double channel projected installation, 16:00 loop, 2007.
Batbox / Beatbox reveals the limitations of human sight both in nature and in a cultural context. The overall piece parallels two somewhat opposed environments: nature depicted through bats' nightly echolocation and the urban metropolis navigated by hip-hop artists. The dialogue between the two video works is realized on a structural, aural and contextual level. Focusing on two different ways to use sound and movement as tools to navigate and identify one's environment. In Batbox sound and movement is portrayed as a biological phenomenon, in Beatbox as a cultural one.
Bats evolved capacity to echolocate reveals the limitations of human vision. In the arch of the narrative the way one perceives the subject, both visually and aurally, changes. Batbox, take one has been made with the collaboration of bats bioacoustics researcher Jon Flanders from Bristol University.
The second part of the installation has been created in collaboration with New York beatboxers Kid Lucky and Shockwave and spoken word artist Vocab. Beatbox, alternate take portrays sound and movement as self expressive navigational tools. In the style of the city symphonies the beatboxers have created the entire soundtrack of the film by interpreting and mimicking the sounds of their surroundings. A spotlight shows the urban space as a stage, where in the words of Vocab every street corner has the ability to tell a thousand stories.