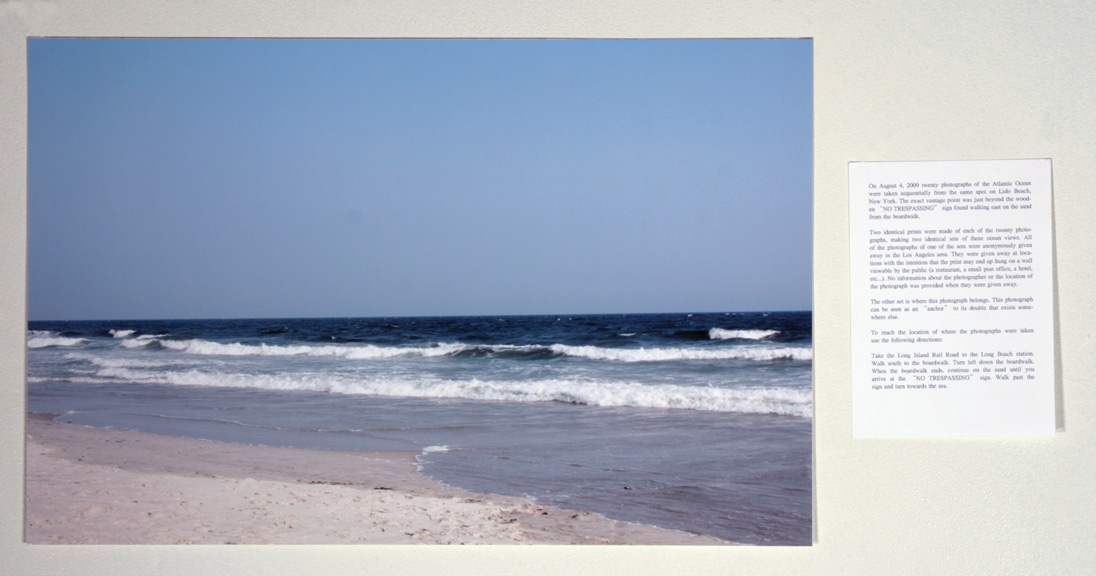 Long Island, New York, August 4, 2009. Edition by 2nd Cannons. Available at: http://2ndcannons.com/Edition_Frameset.html.
An 11x17 photograph accompanied by the following text, printed on a separate uncoated paperstock: On August 4, 2009 twenty photographs of the Atlantic Ocean were taken sequentially from the same spot on Lido Beach, New York. The exact vantage point was just beyond the wooden 'NO TRESSPASSING' sign found walking east on the sand from the boardwalk.
Two identical prints were made of each of the twenty photographs, making two identical sets of these ocean views. All of the photographs of one of the sets were anonymously given away in the Los Angeles area. They were given away at locations with the intention that the print may end up hung on a wall viewable by the public (a restaurant, a small post office, a hotel, etc...). No information about the photographer or the location of the photograph was provided when they were given away.
The other set is where this photograph belongs. This photograph can be seen as the 'anchor' to its double that exists somewhere else.
To reach the location of where the photographs were taken use the following directions:
Take the Long Island Rail Road to the Long Beach station. Walk south to the boardwalk. Turn left down the boardwalk. When the boardwalk ends, continue on the sand until you arrive at the 'No TRESSPASSING' sign. Walk past the sign and turn towards the sea.