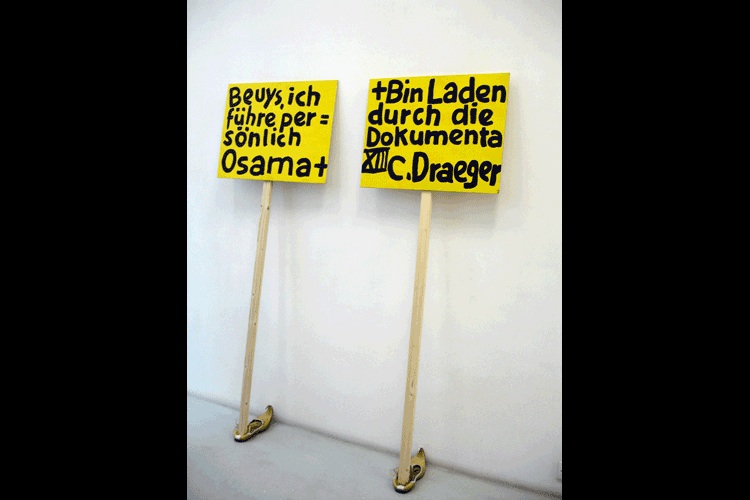 The Promise, 2003/2008. Wood, Paint, Shoes, Straw.
(Translation: Beuys, I will personally take Osama Bin Laden to Dokumenta 13)
In the 70's the leftist terrorists Andreas Baader and Ulrike Meinhof, and their group RAF (Red Army Faction) were the public enemy #1 in Germany. They infused a degree of fear and paranoia within the german society that can be only compared to the threat Al Kaida and Osama Bin Laden presents to western societies since Sept 11. Beuys' piece addressed a promise to the greatest dead german artist, Albrecht Duerer, that he will take these enemies of society to visit Dokumenta and thus try to achieve a reconciliation through the healing power of art. Of course, the irony that he would never be able to find these people in the first place, since the whole german police apparatus was unable o track them down, also suggested that the piece was a provocation that suggested a critic for the heavy handed reactions of the german authorities. Their crackdown led to a period of restricted personal freedom in Germany and a degree of surveillance that reminded of George Orwell's 1984 - something that happened again on a worldwide scale after September 11. Draeger's remake of Beuys' seminal 1972 piece is a promise to Beuys, the greatest german artist of the 20th century to find Osama Bin Laden, the most feared terrorist of our time. It updates the issues that have only gained in actuality since the 70's. It is again a somewhat utopic promise though, because tracking down Osama Bin Laden and invite him for a trip to Kassel could prove an even more daunting task than to find the RAF in 1972.
The piece has originally been conceived for Dokumenta 12, but the promise couldn't be fulfilled in due time. So it was updated for Dokumenta 13.