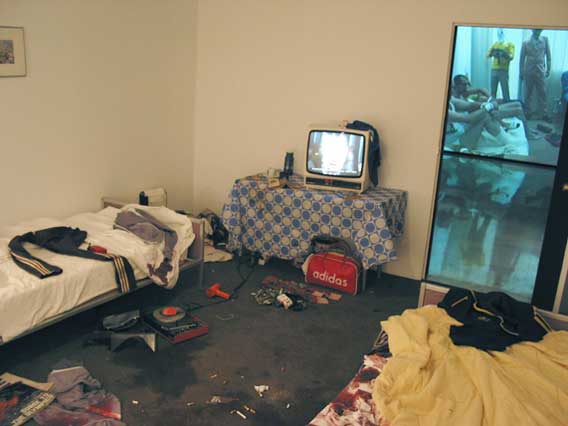 The artist remembers. 30 years after the 1972 abduction and murder of eleven members of the Israeli Olympic team by Palestinian terrorists during the XXth Olympiad in Munich. And the world will also remember the September 11th terrorist actions in New York. These were two events in September, within the span of one generation, which brutally rendered dramatic and enduring changes upon our world. One is nearly forgotten, the other we have barely begun to process.
Draeger’s installation Black September presents a partial fictional presentation of the sequence of events as they occurred in the besieged room. The unfolding of these events in Munich, a nearly forgotten early climax in global terrorism, was an absurd spectacle encased within the theatrical set of the Olympic Games. Even as the siege was drawn out, the Olympic community attempted to present a facade of desperate, feigned normality. Moreover, as the German Democratic Republic television broadcast live the preparations for an overthrow attempt dubbed 'Operation Sunshine', the terrorists as well as the hostages were able to view up-to-the-minute reports on every step of the police action on the television set inside the apartment where the hostages were being held.
Draeger’s installation includes reworked excerpts from the contemporary TV coverage, visible from within a reconstruction of the room itself. Fact and fiction are mingled and so are past and present, as the line between live and documentary, between observer and participant, are blurred. The world stands at shock over the current state of global terrorism, September 11th lingers in our minds, Intifada is unleashed in Palestine, and as such, the background setting for Black September informs our reading of both the actual event in history and of Draeger’s representation. The distance in time allows for a fictional element, the myth has replaced the news. But thirty years later the same adversaries are still standing bitterly across from each other. Looking to address not just this condition but perhaps also its roots, Draeger goes on to ask, if the globalization of the image and the globalization of terrorism are not just coincidentally congruent; and asserts that violence and its simultaneous widespread illustration have always gone hand in hand.
Text: Sabine Himmelsbach, Edith Russ Haus, Oldenburg